Prisoners to be force fed through Ramadan 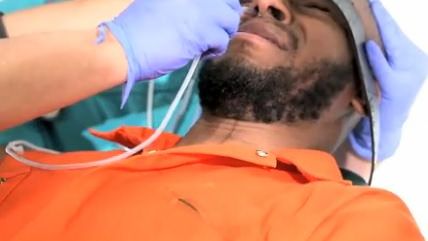 Yasiin Bay, the rapper formerly known as Mos Def, recently volunteered to be force fed in the way many of the hunger striking inmates at Guantanamo are, a procedure The Guardian notes was made public through a leak. You can watch the video, organized by the Guantanamo Bay rights group Reprieve, here.

The force-feeding at Guantanamo has been described as torture by former prisoners and rights groups. About 100 inmates at Guantanamo Bay remain on hunger strike. They will continue to be force-fed through Ramadan, which begins today, although not until sundown in order to honor "the tenets of their faith," according to a prison spokesperson.

President Obama claims he still wants to close Guantanamo Bay down, but has not yet done so. Mos Def appeared to back Obama when he was first running for president in 2008, and doesn't seem to have walked his support back in the last five years. Here he is defending Obama's decision to ignore the push for marijuana legalization back in 2009

And here's "Fear Not of Man," a Mos Def song from 1998 that serves as a reminder that government's desire to be omniscient precedes the post-9/11 mentality: