How to Get Rich and Combat Global Warming

Is a carbon tax what we need? 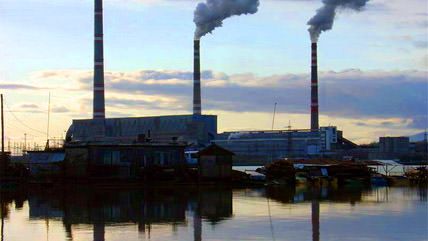 In his recent speech on climate change, President Barack Obama warned that "someday, our children and our children's children will look at us in the eye and they'll ask us, did we do all that we could when we had the chance to deal with this problem and leave them a cleaner, safer, more stable world?"

He's probably right. Then they'll say, "Why the heck didn't you pass a carbon tax?" And we won't be able to give them a good reason.

That's because there is no good reason. A carbon tax, done the right way, is the closest thing you can get to a panacea. Refusing to enact it is like throwing out a winning lottery ticket.

By now, most scientists in the field agree that pumping billions of tons of carbon dioxide into the atmosphere is not a healthy practice for the planet or its inhabitants. In 2010, a report from the National Academy of Sciences asserted, "Climate change is occurring, is caused largely by human activities, and poses significant risks for—and in many cases is already affecting—a broad range of human and natural systems."

The World Meteorological Organization reported this week that 2010 was the hottest year on record. It noted that "nearly 94 percent of reporting countries had their warmest decade in 2001-2010"—while no country had a cooler-than-average decade. Polar ice is melting; oceans are rising; plants and animals are heading northward in search of cooler temperatures.

Gen. Philip Sheridan, if he were alive today, would have even more reason for his stated preference: "If I owned hell and Texas, I'd rent out Texas and live in hell." Before long, he might prefer the fiery pit to all sorts of places that once had congenial climes.

Although much of the damage is unavoidable, curbing the release of greenhouse gases would limit the severity of the problem. The United States has reduced its carbon dioxide output. But more is needed—from the rest of the world, as well as from us—to avert the worst scenario.

Obama paid tribute to the idea of making consumers and businesses pay more for fossil fuels in his 2013 State of the Union address, urging Congress "to pursue a bipartisan, market-based solution to climate change, like the one John McCain and Joe Lieberman worked on together a few years ago." That option, "cap and trade," would have functioned like a carbon tax. But it has long since become radioactive among Republicans, who resist doing anything about global warming.

Eventually, they may pay a political price for insisting that atmospheric pollution is nothing to fear. Until then, the most pro-growth, free-market option around is off the table.

So the president will act to curb emissions as best he can through heavy-handed regulation and extravagant subsidies of "clean" energy. The trouble with these clumsy remedies, says economist Adele Morris of The Brookings Institution, is that they often impose higher costs than the benefits they yield.

They would not be needed if the government taxed fuels according to their environmental side effects. Raise the price of gasoline and Americans would buy more efficient cars, drive less and take the occasional bus. Make coal more expensive and businesses would switch to fuels that pollute less. These adjustments would occur through the natural operation of markets, a process that favors the cheapest solutions.

Wouldn't a carbon tax impose a heavy burden on individuals and the economy? Actually, we could cut carbon dioxide emissions by half over the next decade and a half with a tax that would not be onerous—the equivalent of 16 cents per gallon of gasoline, rising by 4 percent over inflation each year.

This modest impact could be offset with cuts in other levies to keep the total tax load stable. Corporate and personal income taxes, along with payroll taxes, discourage things we want: investment and work. Cutting them would have a positive effect on the economy. A carbon tax, by contrast, would discourage something we don't want: harmful emissions that linger in the atmosphere for centuries.

Our kids and grandkids will thank us if we take action against climate change. But if we do it in a way that leaves them richer instead of poorer, their gratitude will be even greater.