It's time to repeal the state bans on marriage equality. 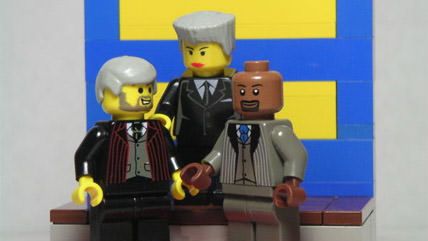 Last week's twin Supreme Court rulings on gay marriage have left final disposition of the question to the states. So now would be a good time for Virginia and the 30 others with constitutional amendments banning same-sex unions to start repealing them.

Even the most strident social conservatives generally do not dispute the principle animating the drive for same-sex marriage: the "fundamental right of all people," as the Cato Institute put it during litigation over DOMA and California's Proposition 8, "to be treated equally by their government." Governments must not discriminate "based solely on differences that are irrelevant to legitimate governmental objectives."

But there is no compelling governmental reason to deny gay couples equal marriage rights or the benefits that attend them. Government's elemental duty consists of protecting individual rights from aggression. Same-sex marriages imperil nobody's rights. They harm no one. Hence opponents have conjured up other rationales.

We are told, for instance, that marriage equality somehow threatens "the institution of marriage." This is akin to arguing that letting gay couples open bank accounts threatens the institution of banking. It not only does not follow, it is counter-intuitive.

Voluminous evidence suggests other social forces have eroded traditional marriage while gay marriage has left it unscathed. Marriage's worst declines occurred in the 1960s and 1970s – long before gay marriage arrived on the scene. And where gay marriage has been legalized, other marriages have not suffered. Massachusetts approved gay marriage a decade ago. Marriage rates there shot up shortly afterward as gay couples wed, and have remained steady since.

This shouldn't come as a big surprise. Time and again, social conservatives confronted with imminent progress have predicted dire consequences that never came to pass.

Women's suffrage was condemned as an "exceedingly dangerous" experiment that would destroy chivalry, defy  God's will, violate biological law, and require "a radical change in human nature of which the world has never given the faintest sign." Women gained the vote – and yet somehow, Western civilization abides.

Opponents of integrating the armed forces similarly denounced the notion as an "experiment" that would "cripple our national defense" and "result in ultimate defeat." It didn't. Foes of integrating the schools warned that doing so would ruin "the amicable relations between the white and Negro races," bring "unending violence and strife," and destroy public education. It didn't. Critics of repealing don't-ask-don't-tell warned that letting homosexuals serve openly in the military would threaten "unit cohesion," "break the all-volunteer force," etc. It didn't.

Perhaps because of this record, the dwindling cadre that opposes gay marriage is falling back on less empirical arguments: Marriage is for procreation; polygamy's a-comin'; the Bible condemns homosexuality. (True. It also decrees, in Deuteronomy 22:13-21, that a bride who is not a virgin "shall be brought to the door of her father's house and there the men of her town shall stone her to death." Maybe we should look elsewhere for legislative guidance.)

As the case against gay marriage has grown weaker, public support for it has grown stronger. Seven years ago, 57 percent of voters approved Virginia's ban on same-sex marriage. Today, 56 percent of Virginians think gay marriage should be legal.

That is bad news for Ken Cuccinelli, the Republican candidate for governor, who remains staunchly opposed to gay marriage in particular and to homosexuality in general, which he considers "intrinsically wrong." It might be better news for Cuccinelli's Democratic opponent, Terry McAuliffe – if McAuliffe had any discernible principles, or courage to match them. McAuliffe gave tepid, pro-forma applause to last week's Supreme Court decisions but refuses to say whether Virginia should repeal its gay-marriage ban.

That leaves only Robert Sarvis, the Libertarian candidate, who notes Virginia's sordid history in matters marital: Not until 1967, in the case of Richard and Mildred Loving, was Virginia's ban on interracial marriage overturned. "If it weren't for the courage of the Lovings," Sarvis says, "I might not have been able to marry the woman I love. But today, Virginia still isn't for all lovers. That's why I want to honor the Loving legacy and lead the fight now, in this election, to recognize same-sex marriage in Virginia."

The clear trajectory of the issue indicates that same-sex marriage eventually will come to pass, in Virginia and the rest of the country, just as women's suffrage, school desegregation, interracial marriage, and all the rest did. It would be nice if, for once, the Old Dominion didn't have to be dragged into the future kicking and screaming.