Would a balanced budget requirement reduce the deficit?

Peter Suderman | From the April 2013 issue 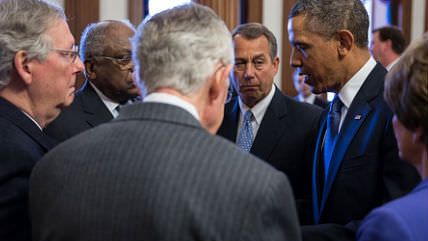 Would a balanced budget requirement actually reduce deficits? Perhaps not, argued Alan Reynolds in the June 1995 issue of reason. During the biggest budget battle of the Clinton era, Reynolds warned in "Unbalanced Amendment" that one proposal to add a balanced budget amendment to the Constitution could instead result in higher taxes—and continued deficits.

The problem with the amendment, wrote Reynolds, was a "shortsighted focus on next year's estimated deficit." When big deficit estimates came in, Congress would raise tax rates on an emergency basis, confident that budget gaps could be filled with higher revenue. But as Reynolds noted, higher tax rates don't always mean higher revenues: In the early 1990s, several states tried to close projected budget deficits by raising taxes, only to see revenues drop. "Far from promoting smaller government," he wrote, "the amendment would be most useful to pols who hope to block constructive tax reforms, to play Robin Hood with the tax code, and to thwart any serious efforts to curb the growth of federal spending."

Ironically, interest in a balanced budget requirement peaked during the two presidential terms with the lowest federal deficits in recent history. Almost two decades later, Bill Clinton is long gone from office, and so are the low deficits that defined his presidency.

But with deficits exceeding $1 trillion and federal debt at $16 trillion and rising, Washington's budget wars have once again intensified. Just a few months into President Barack Obama's second term, House Republicans and the White House already have engaged in heated showdowns over the fiscal cliff, the federal debt limit, and "sequestration," a package of spending cuts that emerged as a result of a 2011 debt limit faceoff.

Both Republicans and Democrats say they want to cut deficits and debt, at least eventually, but so far there has been little progress, and recent proposals to balance the budget seem as flawed as ever. A Republican plan to cut federal spending and cap it as a percentage of the economy would exempt big entitlements like Medicare and Social Security as well as some military spending, putting the biggest long-term debt drivers off limits.