A further rejoinder to Josh Blackman and Seth Tillman. 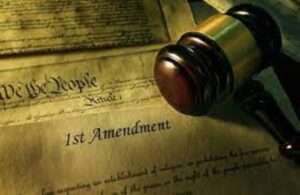 In their latest post on the subject of impeachment and the First Amendment, Josh Blackman and Seth Tillman somewhat belatedly acknowledge the Supreme Court's longstanding jurisprudence on the free speech rights of government employees. As numerous critics of their earlier posts have pointed out (e.g. - Jonathan Adler, Andrew Koppelman, and myself), the First Amendment  does not protect senior government employees in policy-making positions from being removed from their positions. Indeed, such officials get fired because of their speech on a regular basis - including by Donald Trump himself!

To their credit, Blackman and Tillman acknowledge this, and do not claim that high-level government officials have any general constitutional right against being removed for their speech. But they claim that presidents are different from appointed officials because the latter are subordinates of the president, while the president himself has no superiors, except for the voters during an election year:

Senior appointed policy-making executive branch officers are removable by the President. If they lose the confidence of the President, for whatever reason, even for otherwise lawful speech, he can remove them. Absent constitutionally valid congressional tenure protections, these positions are at will….

By contrast, the President is not a cabinet member, who works for a superior—other than the People who act through elections. Nor is the President a GS-15 who can be disciplined for speaking at a political rally. Treating the President as an appointed officer or a civil servant would eliminate the President's ability to act like a politician and party leader.

Blackmand Tillman go on to argue that Congress is not the president's "superior" and therefore doesn't have the power to remove presidents for their speech, in the way that the president himself can remove his own high-ranking executive branch subordinates.

The problem with the Blackman-Tillman theory is that they overlook the reality that one branch of government can remove members of another even if they are not otherwise the superiors of the latter. The whole point of impeachment is to give Congress the power to remove legislative and judicial officials who abuse their power, commit crimes, or otherwise create a menace to the political system. Congress can also, if it wishes, bar such officials from holding office in the future.

While, as Blackman and Tillman note, "the people" are the ultimate superiors of the president, they also cannot remove the president between elections, even if he severely abuses his power, and they also cannot sanction him for crimes and abuses perpetrated during the "lame duck" period after an election (as in the case of Trump). Impeachment is intended to fill this gap in the constitutional structure. To put it in Blackman and Tillman's terms, Congress is indeed the president's superior for the limited purpose of removing him and barring him from future office-holding in response to certain types of illegal or abusive activity on his part. That is perfectly consistent with their not being his superior in various other ways. In a complex system of checks and balances like that established by the Constitution, it is often the case that one branch of government can constrain another with respect to some matters, but not others.

As I pointed out in my first post in this exchange, exempting the president from impeachment for speech acts that are protected from criminal and civil sanctions under the First Amendment would have absurd and dangerous consequences. Nothing in the text, original meaning, and history of the clauses of the Constitution governing impeachment mandates such an exception to the impeachment power.

The Blackman-Tillman approach would also have the dubious consequence of enabling Congress to impeach lower-level officials for various kinds of speech, but barring them from impeaching the president when he engages in the exact same conduct; this, despite the fact that the impeachment standard for both is actually the same: they can all be impeached, removed, and barred from office-holding in the future if they commit "high crimes and misdemeanors."

As for the argument that impeachment for speech acts would create a dangerous slippery slope preventing the president from functioning as a politician and party leader, I preemptively addressed it here:

[S]lippery slope fears about impeachment are misplaced. If anything, there is much more reason to fear that presidents who richly deserve to be removed will get away with serious abuses of power.

The biggest reason why we need not worry much about frivolous impeachment and removal is that removal requires a two-thirds supermajority in the Senate, as well as a majority in the House of Representatives to impeach. The former is almost always impossible to achieve unless many senators from the president's own party vote to convict him….

Ultimately, the real danger we face is not that too many good presidents will be removed from power unfairly, but that too many grave abuses of power will go unpunished and undeterred. I am not optimistic that impeachment alone can solve this problem. The supermajority requirement that prevents frivolous impeachment also prevents it in all too many cases where it is amply justified.  But the threat of impeachment for abuse of power can at least help at the margin.

Finally, Blackman and Tillman again cite the precedent of some senators raising the First Amendment as a defense for President Andrew Johnson during his impeachment trial in 1868. I am happy to rest on the points I made against that argument in my previous post in this exchange. For those interested, that piece also contains links to the earlier posts in our debate, as well as commentary by others.