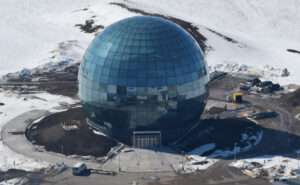 When you subsidize something, the old adage goes, you'll get more of it.

But some ideas make so little economic sense that even the largest corporate subsidy ever awarded by a state government isn't enough.

It's been obvious for quite some time that Wisconsin's highly touted deal with Taiwanese tech giant Foxconn was going to fall well short of the lofty promises made by the project's supporters. Then-President Donald Trump, for example, predicted in 2018 that the planned factory on the outskirts of Milwaukee would be nothing less than "the eighth wonder of the world."

Exactly how short it will fall is now official. In filings with the state, Foxconn says it now plans to employ 1,454 people and invest about $672 million into its still-under-construction factory in Mount Pleasant, Wisconsin. That's a long way from the $10 billion that the company initially promised to spend building a plant that would have employed 13,000 workers. In response to the amended contract, the state will recover $2.77 billion of the subsidies originally promised to Foxconn—though the company will still receive $80 million from Wisconsin taxpayers, according to a statement from Gov. Tony Evers.

But recovering those subsidies won't bring back the residential neighborhood that was flattened to make space for the factory. Developers bulldozed 75 homes, some of which were seized through eminent domain, because why should mere houses full of people stand in the way of the eighth wonder of the world?

The town of Mount Pleasant invested more than $1 billion in the project—effectively mortgaging its entire future on the promise of thousands of new jobs and the tax-paying residents who would come to fill them. Those jobs won't be coming, but the town did have its credit rating downgraded.

The Foxconn folly was the brainchild of former Gov. Scott Walker, a one-time darling of the Republican Party who has now vanished from the political scene. From the outset, the deal didn't make sense. Foxconn promised to make Wisconsin a hub for the manufacturing of HD television screens and other high-tech products, but the company never explained how it planned to make the math work. Besides the relatively higher cost of American labor, there were serious supply chain and logistical issues to be overcome for a factory that was, as TechCrunch put it in 2019, "essentially [in] the middle of nowhere, without the sort of dense ecosystem of suppliers and sub-suppliers required for making a major factory hum."

Even if the dubious economics somehow worked out, the state wasn't going to come out ahead.

The state's Legislative Fiscal Bureau, a number-crunching agency similar to the federal Congressional Budget Office, calculated that it would take the state until 2043 to recoup the $3 billion handout, which was the largest such subsidy in Wisconsin history. Even if all 13,000 promised jobs went to Wisconsinites, the tab would be more than $230,000 per job created, the bureau found.

A separate analysis conducted by the Mercatus Center, a free market think tank based at George Mason University, found that the higher taxes needed to cover the cost of Foxconn's tax breaks would "decrease Wisconsin's long-run GDP by about $20 billion over the 15-year life of the handout."

It would have been a bad deal no matter what, but it didn't take long for Foxconn's promises to spiral downward. The Verge has a useful rundown of the various revisions applied to the original plan in recent years:

The company spent years pivoting wildly from idea to idea. The enormous "Gen 10.5" LCD factory specified in the contract became a far smaller Gen 6, then was canceled, then came back. The company announced it was building something called "the AI+8K+5G ecosystem," to be developed in a network of "innovation centers," buildings that the company purchased only to leave empty. It looked into building fish farms, exporting ice cream, storing boats. It announced plans to build coffee kiosks and ventilators that never moved forward. Most recently, it said it would build electric cars — though maybe, the company acknowledged, that will happen in Mexico.

Now, the official story is that Foxconn will use the factory for "economic investment activities related to locating and operating a technology and manufacturing ecosystem," according to the company's new contract with the state. In short, it doesn't seem like anyone knows exactly what, if anything, will be manufactured in Mount Pleasant.

The entire saga provides an obvious lesson about the wasteful mistakes that state governments make when they throw tax dollars at businesses that promise to create jobs. The best way to create jobs in any state, of course, is to provide a stable economy with comparatively low taxes and a light regulatory touch for all—not to provide special treatment for some and stick others with the bill.

But there's also a lesson here for politicians who would pursue economic nationalism through greater industrial policy at the federal level. Trump saw the Foxconn deal not only as a way to create jobs, but as proof that reorienting supply chains was a matter of political will rather than economics. The factory, he said in 2018, was evidence that his policies were "reclaiming our country's proud manufacturing legacy."

If the largest subsidies ever offered to a foreign company were insufficient to make the Foxconn deal work, maybe that says something about the ability of our political leaders to steer the economy. But you can be sure they will keep trying.