Plus: Yet another Big Tech hearing, Gov. Ron DeSantis did what now, and more... 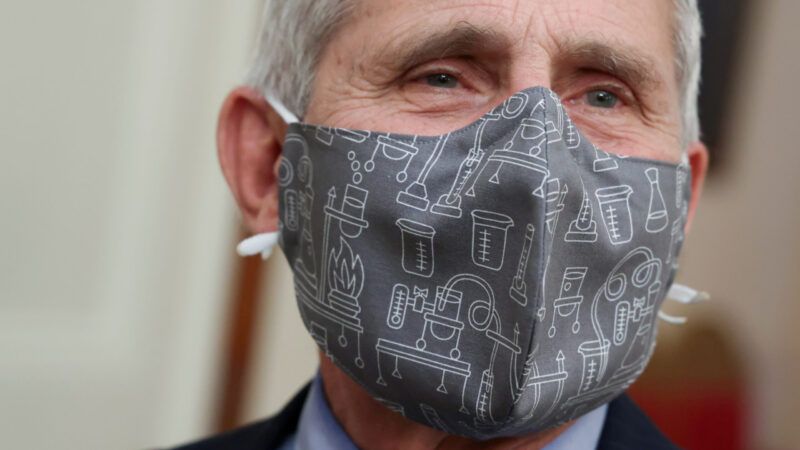 Anthony Fauci, President Joe Biden's chief medical adviser and part of the federal government's COVID-19 response team, struck an overly cautious note during interviews over the weekend, telling CNN's Dana Bash that Americans might have to wear masks in 2022.

"I want [COVID-19 cases] to keep going down to a baseline that's so low there is virtually no threat," said Fauci. "If you combine getting most of the people in the country vaccinated with getting the level of virus in the community very, very low, then I believe you're going to be able to say, for the most part, we don't necessarily have to wear masks."

Fauci expressed cautious optimism that the country "will be approaching a significant degree of normality" by the end of this year. When pressed by Bash to define what he meant by "normality," the doctor demurred.

"I can't say that, Dana," said Fauci. "Because then it will be a sound bite that's not true. I'm saying: We don't know."

Fauci has admitted that he has previously avoided telling people the plain truth about how long it would take to reach herd immunity because he thought the public wasn't ready to hear it; thus it's not always totally clear whether the doctor's pronouncements reflect genuine uncertainty, public messaging considerations, or a mixture of both.

The strategy currently employed by both Fauci and the rest of the Biden administration seems to be to lower expectations, even at the risk of vastly underselling the vaccine. Government officials have declined to state authoritatively when normal life will resume, and White House Press Secretary Jen Psaki has emphasized the necessity of social distancing and masking even post-vaccination. She also backpedaled on a key administration promise to reopen schools within the first hundred days of Biden's presidency, instead settling for half of all public schools open just one day a week.

This is frustrating. While it's true that the government can't accurately predict the specific day that Normalcy Broadly Defined will resume—and that normalcy will look different, for various people, depending on their circumstances—warning everyone about the need to continue social distancing for the rest of the year is excessively pessimistic. The latest evidence suggests that the vaccines don't just prevent deaths and eliminate severe symptoms: It is likely that they significantly reduce the transmission of COVID-19. New virus variants are a concern, but cases are plummeting nationwide, and the death toll should decline precipitously as the most at-risk population—the very elderly—continues to become vaccinated.

The government should urge everyone to get vaccinated as soon as possible, because vaccinated people are overwhelmingly safe from the disease—and are also much less likely to spread it to others. The message should be that vaccination is both a protective shield and a ticket back to speedy normalcy. People who are vaccinated can start doing normal things with other vaccinated people: They can go to weddings, restaurants, and grandparent hug-a-thons. Keep that mask handy for 2022 is a really demoralizing and unnecessary framing.

"Under the guise of racial progress, Smith College has created a racially hostile environment in which individual acts of discrimination and hostility flourish," Jodi Shaw, a former administrator at the college, said in a resignation letter. "In this environment, people's worth as human beings, and the degree to which they deserve to be treated with dignity and respect, is determined by the color of their skin. It is an environment in which dissenting from the new critical race orthodoxy—or even failing to swear fealty to it like some kind of McCarthy-era loyalty oath—is grounds for public humiliation and professional retaliation."

Bari Weiss has more on this over at her Substack.

"Whether it be falsehoods about the COVID-19 vaccine or debunked claims of election fraud, these online platforms have allowed misinformation to spread, intensifying national crises with real-life, grim consequences for public health and safety," said the House Committee on Energy and Commerce, which will host the hearing, in a statement.

Past iterations of these hearings have not exactly inspired confidence in political leaders' tech savviness.

• The Nation: "West Coast States' Failure to Reopen Schools Is a Disaster."

• In a survey of 1,000 Trump voters, the majority said the Republican Party should become more loyal to the former president, not less—even if this means losing the support of establishment Republicans.

• San Francisco School Board President Gabriela Lopez has finally called a halt to the district's renaming initiative, which was criticized for taking precedent over efforts to actually reopen schools:

We are deeply grateful for the work of the renaming committee and many schools are as well. They are excited about the opportunity to uplift communities that have previously been underrepresented. Our students need to attend schools where they feel valued and seen. This work is anti-racist and we're proud of that.

But reopening will be our only focus until our children and young people are back in schools. We're canceling renaming committee meetings for the time being. We will be revising our plans to run a more deliberative process moving forward, which includes engaging historians at nearby universities to help.

In the meantime, this is the last time I'll comment publicly on renaming until schools are reopened.

Very weird for NBC News to frame this as a bad thing! https://t.co/Qmocj8p8TJ pic.twitter.com/f0nl6jk6jm