One complainer managed to shut down a popular local business. 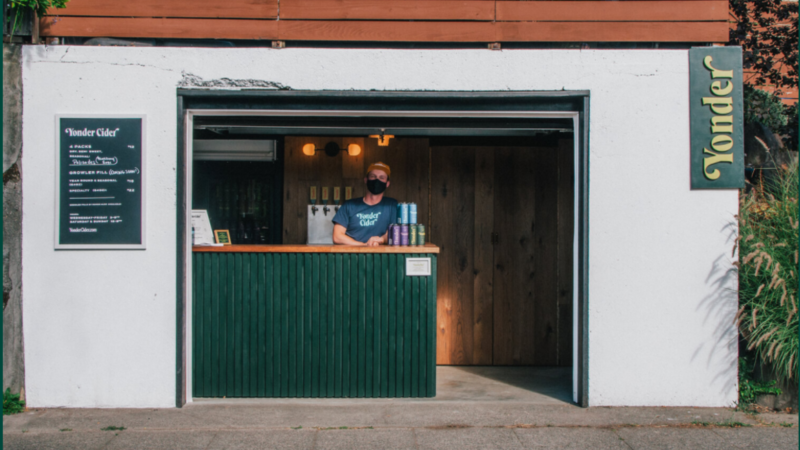 This week Yonder Bar, a beloved, months-old, licensed, takeout-only neighborhood cider bar that operated out of the residential garage of one of its owners, was forced to close. Maybe for good.

Visitor's to Yonder Bar's Yelp page are now greeted with the dreaded words that, so often these days, sit atop the site's listings for the more than 100,000 similarly beloved bars and restaurants around the country: "Yelpers report this location has closed."

But Yonder Bar's closure, unlike many thousands of other bars and restaurants, has nothing to do with COVID-19, the recession, or the economic impact of quarantine policies.

Instead, the closure has everything to do with the persistent complaints to Seattle regulators by one anonymous person and those regulators' choice to bow to that person's complaints.

I visited Yonder Bar, in Seattle's Greenwood neighborhood, last week. What I saw there, as I stood behind a dozen or so other masked, socially distanced customers also waiting patiently in line, was a small, converted garage space that had clearly energized and brought together the local community.

"This makes our community better," local resident and Yonder Bar supporter Ben Kotovic told KIRO last week. "It's a place for us to greet and have a chance to meet our community. The idea of shutting it down doesn't make any sense."

Indeed, many residents seemed to stop at the bar during their early evening walks, soaking up what would be the last sun for several days, before rain and then snow would hit the area. Several customers pulled dogs. Others pushed children in strollers. I saw happy kids biking along the street, runners passing by, and neighbors talking to each other from their porches.

After making my way to the front of the line, I bought a couple of four-packs of Yonder's dry cider, which—and I write this both as a middling, low-tech, at-home cider brewer and regular drinker of bone-dry craft ciders—is among the best I've tried.

On Monday—Yonder Bar's last day in business—I spoke with Yonder's co-founder, Caitlin Bramm. I asked her first about her anonymous persecutor.

"We didn't have a lot of people complain," Bramm says. "We had one person complain. A lot."

Yonder Bar, which was Yonder Cider's only retail location, opened in August, which is also when the company launched its line of ciders. Business was brisk. Then the string of complaints began. What had become an issue by September, Bramm says, reached crisis level by December.

After the anonymous person's complaints, the city was now claiming Yonder Bar was "operating illegally in a residential zone," close to a church and a private school. But both the school and church, notably, have been supportive of Yonder Bar.

The city also alleges Yonder Bar, which purchased all the necessary business and liquor licenses, nevertheless violates the city's single family zoning ordinance. It claims the bar doesn't have adequate off-street parking, that Yonder Bar uses signage to indicate to consumers that it's a bar—rather than just, say, an unmarked garage—and that the bar must operate by appointment only.

Suggestions that Yonder Bar's presence increased auto traffic in the neighborhood—or gobbles up parking spaces available to local residents—don't hold much water. That's because Seattle has designated the street where the garage bar is located a "Stay Healthy" street. That city program, implemented in order to facilitate and encourage safe outdoor activities during the pandemic, sets aside and blocks off some city streets for foot traffic and other recreational and fitness purposes such as biking—and prohibits vehicular through traffic.

Furthermore, the idea that a bar selling to-go ciders could, should, or must sell only to consumers who've made a prior appointment violates common sense and basic business principles. And suggestions that the bar should operate without adequate signage that indicate it's a business make no sense—the city says Yonder can't have any signage at all save for, effectively, one 8 x 8 unlit sign—violates both those same basic business principles and also, likely, the First Amendment.

"You can operate a business from your residence if it doesn't look like a business," says Seattle spokesperson Wendy Shark.

While Yonder Bar is closed, Yonder Cider is still available to buy online and in retail stores. And efforts continue to ensure Yonder Bar's hiatus will be temporary. Yonder has launched an online petition, asking supporters to tell the city to allow it to reopen. (Full disclosure: I signed.) And a freedom of information act request, which at least one party has filed with the city, could shed light on just who filed the complaints against Yonder Bar and—maybe—why they did so.

Hopefully, the city will come to its senses. And soon.

"It's going to be funny when this lone complainer winds up getting a citywide zoning change that will legalize stuff like Yonder on every lot," the Seattle-based Twitter account Pushing the Needle tweeted hopefully this week.

That would be funny. And awesome. And the most just of results.