The president keeps insisting on the urgency of $1.9 trillion in spending. But much of it would be spent on non-urgent policies unrelated to the pandemic. 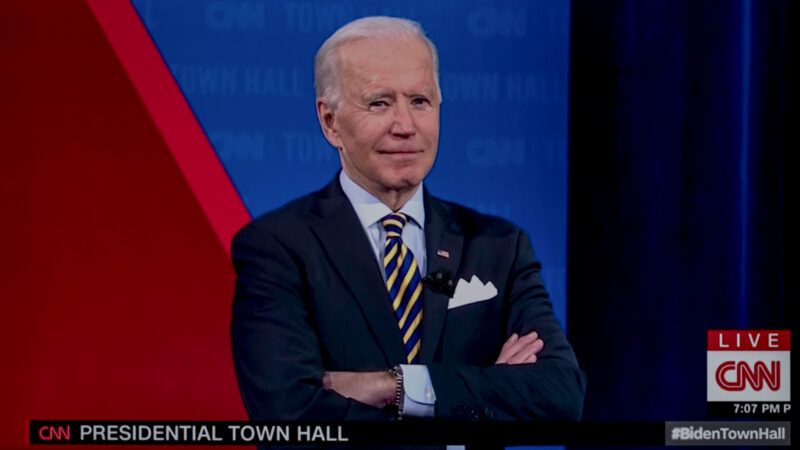 Over and over again, President Joe Biden has pitched his $1.9 trillion stimulus plan as vital to restoring a struggling American economy and recovering from the pandemic. Many households are struggling, he tweeted earlier this month, with desperate Americans wondering how they are going to eat. "That's why I'm urging Congress to pass the American Rescue Plan and deliver much-needed relief." Time, he has insisted, is of the essence. "We don't have a second to waste when it comes to delivering the American people the relief they desperately need. I'm calling on Congress to act quickly and pass the American Rescue Plan."

Biden has certainly gone big. His $1.9 trillion deficit-funded plan would be among the largest stimulus/relief packages in history. But much of the spending he has proposed would do little or nothing to help actually struggling Americans. Instead, the plan is padded with non-urgent, pre-existing Democratic policy priorities that have, at most, only tangential relationship to the crisis at hand.

Take schooling, for example. The mass closure of schools has caused immeasurable chaos and frustration for families across the country, especially those with working parents, and it has set back educational advancement for children, especially in lower-income families with fewer resources or alternatives. Beyond the disruptions to family schedules and educational achievement, there is mounting evidence that school closures, in combination with other forms of isolation stemming from the pandemic, have taken a dark toll on student mental health. In the Las Vegas area, schools finally reopened following a rash of suicides in which 18 students took their own lives.

Biden ran on reopening most schools for in-person instruction within a hundred days—a promise his administration has both walked back and then kinda-sorta attempted to un-walk back. But reopening, he has insisted, is conditioned on schools obtaining sufficient funding in a relief package. Accordingly, his plan includes about $128 billion for K-12 schooling "for preparation for, prevention of, and response to the coronavirus pandemic or for other uses allowed by other federal education programs," as part of a $170 billion boost in education-related spending.

This is a dubious argument on its face, considering that private schools have largely reopened, as have public schools in some states, such as Florida, that have pushed for faster and more widespread reopenings.

But even if you think substantial additional funding is strictly necessary for rapid reopening, there's a problem: The vast majority of the relief plan's money for schools wouldn't be spent in the current fiscal year, or even next year. Previous coronavirus relief and congressional spending bills have already included more than $100 billion in funding for schools. But according to the Congressional Budget Office, "most of those funds remain to be spent."

As a result, just $6 billion would be spent in the 2021 fiscal year, which runs through September. Another $32 billion would be spent in 2022, and the rest by 2028. Biden is insisting that schools must reopen soon—and also that the only way for them to reopen is to authorize more than $120 billion in spending, most of which wouldn't roll out for years. It doesn't make much sense.

Similarly, Biden's plan calls for $350 billion to backstop state budgets, which were projected to be down as much as 8 percent overall this year. Yet according to The Wall Street Journal, total revenues were down just 1.6 percent for the 2020 fiscal year, and 18 states ended the year with above-projection revenue. As Reason's Christian Britschgi noted last week, Biden's plan would disburse money to every state—including California, which is set for a $15 billion surplus. Previous coronavirus relief bills, meanwhile, have already doled out $300 billion to bolster state budgets. The billions in extra funding Biden's plan would deliver to soaring state budgets would, in all likelihood, not be spent this coming year. So much for not having a second to waste.

There's more like this peppered throughout Biden's pandemic relief plan. Biden and his communications team raise the issue of food insecurity—then insist that checks should go to a two-earner family with stable jobs making $120,000 a year in a city with a roughly $40,000 annual median income for couples.

This is despite the fact that the average couple with comparable six-figure earnings has experienced no unusual job loss and has piled up record levels of personal savings. Even if the goal is just to pump more money into the economy, these checks wouldn't, for the most part, be spent. They'd just add to the savings.

As the Committee for a Responsible Federal Budget (CRFB) notes, half the spending in the coronavirus relief plan would go toward such poorly targeted measures. The plan also includes expansions to Obamacare subsidies and would hike the federal minimum wage to $15 an hour—in 2025. Ultimately, the hike would cost jobs rather than preserve them. But raising the federal minimum wage has been a Democratic policy priority for years, so it got stuffed into the relief bill grab bag.

How much of this alleged coronavirus relief plan is actually related to the coronavirus?  According to CRFB, just 1 percent of the relief plan's spending would go toward vaccines, and just 5 percent would go toward pandemic-related public health needs. Meanwhile, 15 percent of the spending—about $300 billion—would be spent on long-standing policy priorities that are not directly related to the current crisis.

Biden keeps insisting that time is of the essence, that massive federal spending is urgently needed to speed America's recovery from its coronavirus-induced health and economic downturn. But the practical details of his plan say otherwise. The president's relief plan is an object lesson in non-urgent, non-vital policymaking. Biden is pitching a coronavirus relief package that has very little to do with coronavirus relief.