Laws against sedition have historically been used by insecure officials to punish critics. 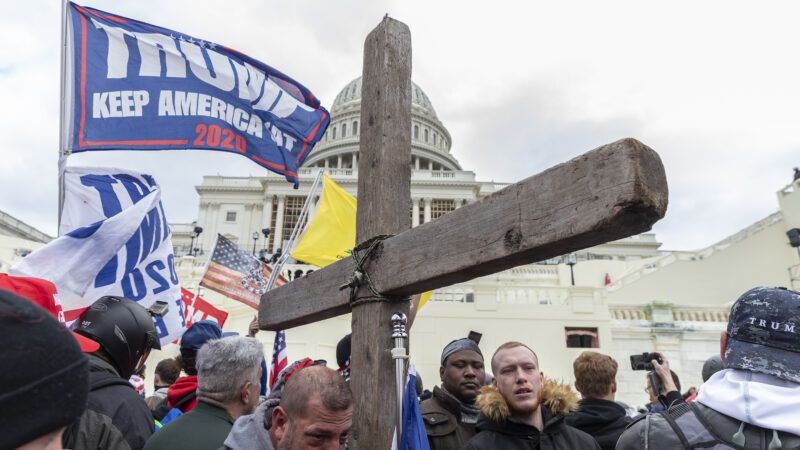 In the wake of the January 6 storming of the Capitol, a popular new word in common usage is "sedition." Horrified onlookers—and conniving power brokers—urge charging the participants and those who egged them on with "seditious conspiracy" under laws with a nasty history of politicized mischief. As such, "sedition" joins the recently popular "treason" on the list of overused and emotionally charged vocabulary terms with dangerous implications.

"For at least some of these protesters, particularly the ones that broke into the Capitol, I think there's an extraordinarily strong case that they used force to delay, to hinder, the execution of our laws governing the election and how electoral votes are counted," Professor Devin Schindler of Western Michigan University's Cooley Law School told the Detroit Free Press. "It seems fairly clear to me, based on what we're seeing, that folks are in fact, almost textbook violating this seditious conspiracy statute by using force to interfere with lawful government activity."

In his analysis, Schindler echoed earlier comments by former Attorney General William Barr. According to the Wall Street Journal, Barr "told the nation's federal prosecutors to be aggressive when charging violent demonstrators with crimes, including potentially prosecuting them for plotting to overthrow the U.S. government… He encouraged the prosecutors to seek a number federal charges, including under a rarely used sedition law, even when state charges could apply, the people said."

Of course, Barr spoke back in September, when riots consumed parts of many American cities. While out of office by the time of the violence at the Capitol, he called it "outrageous and despicable" and said, "federal agencies should move immediately to disperse it." He did not, it seems, again invoke the prospect of "sedition" charges. Perhaps he realized that the bar for proving sedition is—rightfully—very high in courtrooms that are generally protective of free speech rights.

At the time of Barr's comments, former U.S. Attorney Barbara McQuade—who oversaw a rare (and unsuccessful) sedition prosecution in 2012—said that prosecutors face challenges when dealing with allegations of ideologically motivated activity. "You can't penalize people for First Amendment activity, but it leaves fewer tools when you have a group plotting an attack of some sort," she told the Wall Street Journal.

It's become very difficult in the United States to bring sedition charges because courts are all too aware of their record as dangerous weapons in the hands of insecure politicians.

"It's the sort of crime that weak governments enforce against their citizens when the government is facing an existential threat — or thinks it is," Harvard Law School's Noah Feldman pointed out in September:

Sedition prosecutions in the U.S. have a particularly shameful history. The 1798 Sedition Act was used in a nakedly partisan manner by John Adams's Federalist administration to prosecute Republican newspaper editors… The Sedition Act of 1918 was not much better. Passed under conditions of wartime hysteria, it was used to prosecute more than 2,000 people, most of whom spoke against World War I.

The weaponization of law against speech disliked by powerful people has prompted landmark free speech decisions. "The constitutional guarantees of free speech and free press do not permit a State to forbid or proscribe advocacy of the use of force or of law violation except where such advocacy is directed to inciting or producing imminent lawless action and is likely to incite or produce such action," the U.S. Supreme Court ruled in Brandenburg v. Ohio (1969).

Feldman originally discussed sedition with regard to protesters against police brutality and racial injustice, but he returned to the issue after the violence at the Capitol.

"From the standpoint of hard statutory language, it would be very difficult to prove beyond a reasonable doubt that the conduct that we observed counted as sedition under the law," he said of the Trumpist participants. Of Trump himself, Feldman commented:

He's calling for a protest march on the Capitol and that's perfectly lawful and constitutionally protected, in fact. Similarly, when the president spoke later and told his supporters to go home while telling them that he loved them and that the election was being stolen, he was pretty careful not to use words that directed imminent lawless action.

That's not to say that the people who violently stormed the Capitol, attacked people (and killed a policeman), and damaged property are blameless or that Trump should get a free pass. But there are other legal means for addressing bad behavior than dusting off statutes that, historically, are best known for their use by powerful government officials to crush enemies and silence dissent. People flinging the word "sedition" around now raise credible concerns that their motivations are no better than those that drove prosecutions under the charge in the past.

In its unfortunate reintroduction to American discourse, "sedition" resembled "treason," a word that in recent years has become an increasingly popular term for smearing anybody with opposing viewpoints. While specifically defined in the U.S. Constitution as levying war against the United States or "adhering to their enemies," it's been used to label people "guilty" of nothing more than supporting opposition political candidates or of refusing to applaud a speech.

Given that treason potentially carries the death penalty, it's a particularly inappropriate epithet to fling at people whose politics you dislike. Sedition "only" carries a maximum penalty of 20 years in prison, but that is a brutal consequence to dangle over people for supposedly violating a law that has historically been used by the powerful against their critics.

If sedition is the sort of crime that weak governments enforce against their citizens, the new popularity of the accusation, along with that of treason, might well be an indicator of the decayed nature of our political institutions. With Americans holding high contempt for one another and nearly record low trust in government—one-in-five voters in a January 6 YouGov poll even supported the storming of the Capitol—it's easy to see how insecure politicians and members of the pundit class could seek strength in outrageous charges and draconian penalties.

But bogus charges and suppression of speech—whether that speech is wise or intemperate—won't reinforce shaky institutions. If people horrified by the events of January 6 want to prevent a recurrence, they can best do so not by resorting to a disreputable legal weapon, but by convincing all sorts of Americans that their freedom and security can be maintained under the existing system. That means that, so long as they respect the rights of others, the system will leave them alone, and not be used to crush them.