Using police to forcefully shut down Mac's Public House is a violation of liberty and a waste of resources. 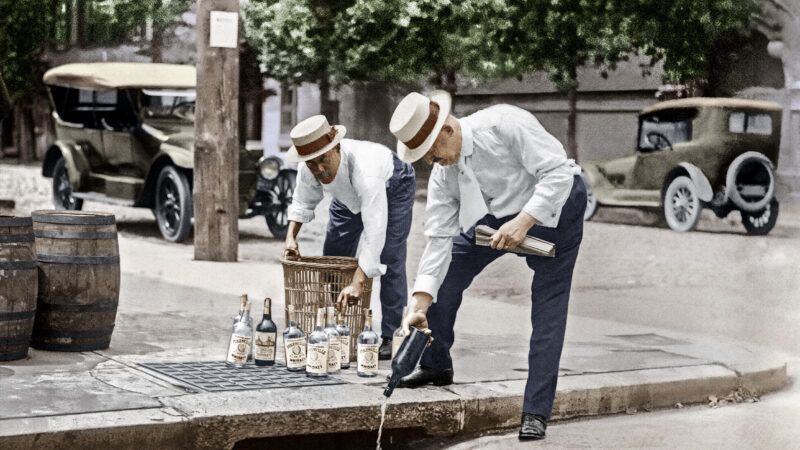 A Staten Island bar whose owners had declared it an "autonomous zone" in order to defy a local ban on indoor dining was reportedly raided by police on Tuesday night.

Mac's Public House was the target of an undercover sting conducted by New York City Sheriff's deputies, the Associated Press reported on Wednesday. Plainclothes deputies entered the bar on Tuesday night and ordered food in exchange for a mandatory $40 "donation" that Mac's was charging all patrons to skirt a local ban on serving food to indoor diners.

Tickets and citations were issued, and the incident culminated with the arrest of co-owner Danny Presti. One of the attornies representing the bar and its owners told the Staten Island Advance that Presti was arrested "for criminal trespass because he wouldn't leave his own establishment."

Videos of the incident posted to social media show a sizable crowd of people gathered outside Mac's Public House as Presti was arrested. A local TV station reported that protesters shouted at deputies as they closed the bar.

In a video posted to Instagram, state Sen. Andrew Lanza (R–Staten Island) could be seen asking the deputies who arrested Presti to explain their actions while others in the crowd shouted their support for the bar's co-owner.

The raid on Mac's and the arrest of Presti is the culmination of a weeks-long battle. The bar had its liquor license revoked and was accumulating fines of up to $10,000 per day, the Advance reported, because it was staying open despite its location within a so-called "orange zone"—a state public health designation for areas where COVID-19 cases are spiking. Indoor dining is forbidden in those zones.

In response, the bar's owners declared their property to be an "autonomous zone"—a tongue-in-cheek reference to the short-lived "Capitol Hill Autonomous Zone" that protesters in Seattle declared last summer.

The bar was also operating in defiance of a nonsensical 10 p.m. curfew that applies to all establishments in New York State. Although the curfew is purportedly intended to slow the spread of COVID-19, there is very little internal logic to it. If serving food indoors is safe enough to be legal at noon or 9:45 p.m., there's no reason why it shouldn't be safe enough to be legal at 10 p.m.

Beyond the obvious economic burden that these restrictions have placed on bars and restaurants, one of the major problems with obviously flawed and arbitrary rules is that people don't see much of a reason to follow them.

Yes, social distancing and limiting public gatherings are important to slowing the spread of COVID-19, but public officials have fumbled the opportunity to earn the public trust that is necessary for combatting a pandemic. But shows of force against defiant businesses only stand to make things worse and could encourage more acts of civil disobedience in the face of unfounded COVID-19 restrictions.

Bars and restaurants that defy government orders to close or limit dining can be fined for doing so, and courts will have to sort out which restrictions are acceptable and which create an unreasonable and unlawful burden on the rights of business owners and restaurant-goers.

It's highly unlikely that anyone who was choosing to eat at Mac's Public House on Tuesday night was doing so unaware of the risks involved. The voluntary transactions between the bar and its patrons were taking place with everyone implicitly agreeing to that level of risk—and, if anything, a slew of police officers storming the bar only increased the COVID-19 risk by packing more bodies into the same, limited space.