As Trump's Election Conspiracy Theories Get Crazier, Some Republicans Are Finally Backing Away

More should do the same. 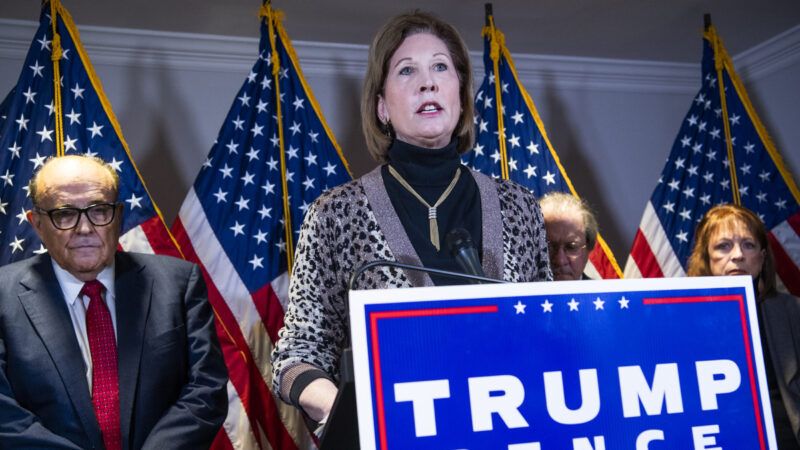 The first tactic involves claiming that Trump was the victim—and isn't he always—of a vote-rigging scheme allegedly perpetrated by Democratic Party operatives and Dominion Voting Systems, a company that manufactures electronic voting machines and their software. Those allegations have been percolating through the right-wing fever swamps for days, but on Thursday afternoon they were given a full endorsement by Sidney Powell, one of Trump's top election lawyers, who sketched out a massive conspiracy that stretches far enough to include Hugo Chavez, the former Venezuelan dictator who has been dead since 2013.

"What we are really dealing with here and uncovering more by the day is the massive influence of communist money through Venezuela, Cuba, and likely China in the interference with our elections here in the United States," Powell claimed. Later, she said Trump had actually won the election "by a landslide" before as many as 7 million votes were switched electronically to President-elect Joe Biden.

While discussing Powell's press conference on Thursday night, Fox News host Tucker Carlson said the allegations, if proven, would constitute "the single greatest crime in American history." He's probably right. But, as Carlson went on to point out, the allegations are a long way from being proven. In fact, Powell has rebuked his offers to bring forward the evidence of these explosive claims.

Publicly, the Trump campaign has offered nothing that could be rightfully called evidence to support these wild conspiracy theories. Many of the specific claims have already been debunked, so there's no need to go through them one-by-one here. The longer this goes on without Trump's attorneys offering evidence of this huge scandal, the more obvious it becomes that these claims are not meant to hold up in court, but merely intended to create doubt about the election's outcome and to cloud the minds, specifically, of a few key Republicans.

Which brings us to the second tactic. Trump has personally invited some of the top Republicans in the Michigan state legislature to meet with him in the White House on Friday. It is unlikely that the topic of conversation will be the struggles of the University of Michigan football team. As anyone who follows the president's Twitter feed can tell, he's had only one thing on his mind for weeks.

The Michigan legislature, like all state legislatures, is responsible for the final certification of the results of the election. That could happen as soon as Monday. Michigan Senate Majority Leader Mike Shirkey, a Republican, said earlier this week that lawmakers would not vote to discard the election results. Biden won the state by about 157,000 votes.

The Trump campaign strategy, then, seems to go something like this: Make loud, explosive allegations about the legitimacy of the election to gin up Trump's increasingly conspiracy theory-obsessed base as a way to pressure state lawmakers in Michigan (and potentially other states too) to refuse to certify the outcome of the election. Since the federal government, thankfully, doesn't have much control over elections, Trump is resorting to the next best thing: unsubtly threatening to turn his rabid base of supporters against anyone who goes along with this "plot" to "steal" the election.

The Trump campaign is trying to convince state legislatures to overthrow the will of the electorate, and bragging about their plans on background. https://t.co/vAhJZP2mtv pic.twitter.com/7Xag86ykat

Some Republicans—not enough and certainly not all—have seen enough of this nonsense. In a statement to The Washington Post on Thursday night, Sen. Ben Sasse (R–Neb.) pointed out the obvious disconnect between what Trump's legal team is saying at press conferences and what they are saying in courtrooms.

"When Trump campaign lawyers have stood before courts under oath, they have repeatedly refused to actually allege grand fraud—because there are legal consequences for lying to judges," Sasse noted.

Sasse said the Trump team's "wild press conferences erode public trust," and he called on Trump's attorneys to stop pressuring electors and state officials to refuse to certify the vote counts in Michigan.

Sen. Mitt Romney (R–Utah), who has been on the receiving end of a close loss in a presidential election, was even more direct. "Having failed to make even a plausible case of widespread fraud or conspiracy before any court of law, the president has now resorted to overt pressure on state and local officials to subvert the will of the people and overturn the election," Romney said in a statement posted to Twitter. "It is difficult to imagine a worse, more undemocratic action by a sitting American president."

More prominent Republicans should join Sasse and Romney in rebuking Trump's behavior—but, then, how many times in the past four years has that been the case?

Trump's attempt to bully and conspiracy-monger his way to a second term is in keeping with his character, of course. He rose to prominence on the political right by amplifying a conspiracy theory about then-President Barack Obama. He'll ride out of the White House with the Republican Party's defining characteristic being, as National Review's Kevin Williamson put it on Thursday, "conspiracy kookery."

What began in the wake of the election as an apparent attempt to "humor" the president and cushion his ego has metastasized. It's still unlikely to change the results of the election. Flipping the results in Michigan wouldn't give Trump enough electoral votes to win. Georgia finalized its recount on Friday and reported that Biden had indeed carried the state. Pennsylvania and other key states are expected to certify their results early next week.

If Powell or Trump's other attorneys have evidence to confirm their wild accusations regarding the election, now is the time to show it. Without it, they are guilty of abetting a ridiculous scheme to undermine the legitimacy of American elections for personal, egotistical reasons. That so few Republicans seem willing to admit those basic facts speaks volumes.