The New York governor is getting a shiny award for playing a good governor on TV. 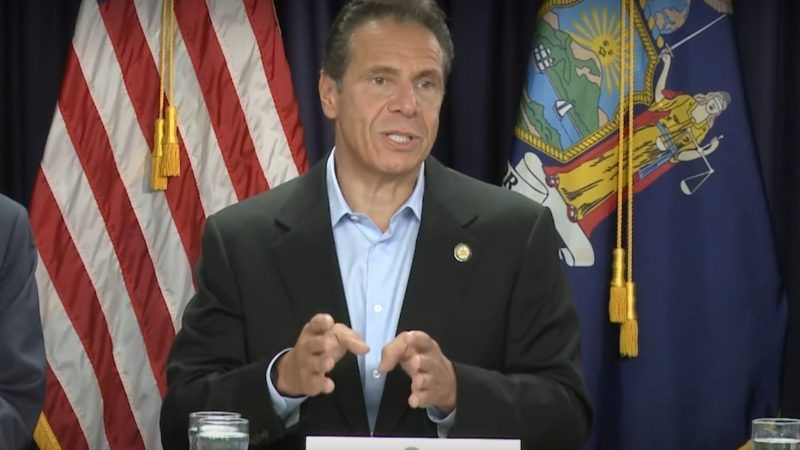 He's presided over the second most deadly COVID-19 outbreak in the country. He's implemented draconian lockdown restrictions that have devastated small businesses. He's fought with and mocked reporters trying to get basic answers to simple questions. Now, New York Gov. Andrew Cuomo (D) will get an Emmy.

On Friday, the International Academy of Television Arts & Sciences announced that Cuomo would be receiving the organization's International Emmy Founders Award, which "celebrates the accomplishments of an individual or organization, whose work is recognized throughout the world" and which crosses "cultural boundaries to touch our common humanity."

Past recipients include Oprah Winfrey, Al Gore, and Steven Spielberg. Cuomo will join this illustrious group because of the daily news briefings he's given during COVID-19 in which the governor describes how terribly the pandemic is going in his state and what new restrictions on businesses and individuals his administration will impose.

"The Governor's 111 daily briefings worked so well because he effectively created television shows, with characters, plot lines, and stories of success and failure," said International Academy President & CEO Bruce L. Paisner in a press release announcing the award. "People around the world tuned in to find out what was going on, and New York tough became a symbol of the determination to fight back."

As of Thursday, New York state has reported 34,206 confirmed deaths from COVID-19. That's the most of any state in the union, and the second most per capita, behind only neighboring New Jersey.

A significant number of those deaths—some 6,500—have occurred in the state's nursing homes, which, under a policy issued by Cuomo, were told to accept COVID-19-positive patients in an effort to free up hospital capacity. The death toll from this policy is likely much higher given that New York state hasn't released a count of how many nursing home residents died at the hospital.

(There's an active dispute about whether Cuomo literally required nursing homes to accept COVID-19-positive patients, as nursing homes claim, or whether he merely issued nonbinding guidance encouraging them to do so. Neither interpretation seems very favorable to the governor.)

Cuomo has also presided over some of the strictest lockdown policies in the country, micromanaging the conditions under which businesses have been allowed to reopen. He even conditioned reopenings on the deployment of significant police resources to enforce social distancing.

Back in September, for instance, he said he'd only allow indoor dining to resume in New York City if a 4,000-member police task force were dedicated to enforcing social distancing restrictions that would come with any reopening.

He's been pretty bad on religious liberty too, imposing far more stringent restrictions on houses of worship than he's applied to secular establishments.

To be sure, Cuomo isn't getting an Emmy for being a good governor, necessarily, but rather for playing one on TV. Perhaps there's justification for that. Despite the damage he's done to life and liberty, some 73 percent of New York voters approved of the governor's handling of the pandemic, according to a late October poll.  Those press conferences really did work!

Still, there are plenty of problems with Cuomo's stage performance that should maybe disqualify him from an honor as prestigious as an Emmy.

His press briefings have become just one forum for the governor to continue his public pissing match with Mayor Bill de Blasio over what's allowed to open in the city, when, and on what conditions. That's generated much confusion and angst for businesses wondering if they're allowed to make a living again, and for parents wondering if their kids can go to school.

On Wednesday, Cuomo berated reporters for trying to get clarification on whether schools in New York City would close on Thursday. (Schools in the city are now all remote.)

Gov. Andrew Cuomo (D-NY) mocks and argues with a reporter during a testy exchange about school openings. pic.twitter.com/POwVxX4NTl

Given his botched pandemic response, Cuomo should be condemned by polite society the world over. Instead, he's effectively being rewarded for turning updates on the plague-ravaged state he governs into must-see television.

That's a disgusting prioritization of style over substance, and one wonders what exactly the folks over at the International Academy were thinking.

Cuomo will receive his award on November 23 during this year's International Emmy Awards show that will be remote and livestreamed because of the pandemic the governor has done such a poor job of responding to.