Why the Hell Don't We Have Enough Damned COVID-19 Tests After 8 Months of the Pandemic?

It's not like we didn't know that we had a problem. 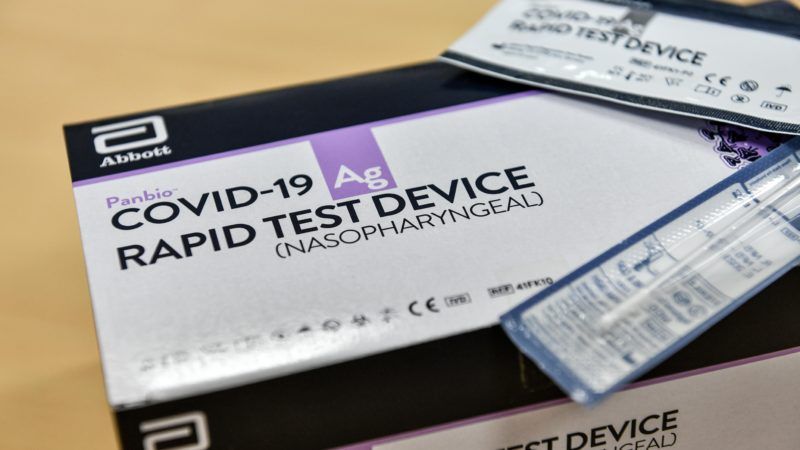 The COVID-19 testing situation in the United States after eight months of the pandemic is déjà vu all over again. As cases surge, Americans around the country are once more lining up for hours in the hope of getting a virus test and then waiting for days for the results. Despite the fact that the number of COVID-19 tests has recently been hovering around 1.5 million per day, that's not nearly enough.

Why? Among other reasons, because the test positivity rate is now 10 percent, which is more than double the rate back in October. The percent positive rate "is a critical measure," two researchers at Johns Hopkins University explain, "because it gives us an indication how widespread infection is in the area where the testing is occurring—and whether levels of testing are keeping up with levels of disease transmission."

It didn't have to be this way.

At the beginning of the pandemic, there were understandably few tests available for detecting coronavirus infections. But the federal government made the situation much worse by screwing up the development and deployment of testing. The Centers for Disease Control and Prevention botched its own COVID-19 test while the Food and Drug Administration (FDA) blocked the development of alternatives by private companies and universities. Months later, the United States still does not have enough tests.

The good news is that the FDA has since approved more than a couple hundred COVID-19 tests. But these tests are not available on the scale needed to stem the tide of infections by enabling Americans to test themselves, warn friends and family if they test positive, and then voluntarily isolate themselves to prevent the further transmission of the disease.

President Donald Trump and his administration deserve credit for launching Operation Warp Speed, which appears just months later to be delivering on its promise to provide safe and effective COVID-19 vaccines. The National Institutes of Health (NIH) also launched a Rapid Acceleration of Diagnostics (RADx) program, funded with $1.5 billion appropriated by Congress as part of the Paycheck Protection Program and Health Care Enhancement Act. The RADx initiative has been integral to developing numerous COVID-19 tests. In a July New England Journal of Medicine article, NIH researchers noted that RADx intended to expand COVID-19 testing capacity to 6 million persons per day by December. As of mid-November, we aren't close to getting there yet.

Operation Warp Speed was successful at scaling up vaccine production in part because the federal government issued around $18 billion in contracts to their makers. Had the government similarly prioritized COVID-19 testing, the country would not now be piddling around with just 1.5 million tests per day. The Trump administration contracted in late August with Abbott Laboratories to purchase 150 million of its point-of-care BinaxNOW COVID-19 tests for $750 million. The tests, which take about 15 minutes to provide a result, began shipping to state public health agencies at the end of September.

That's a start, but much more testing needs to be done. Instead of using tests primarily to diagnose COVID-19 cases, they should be used as part of disease surveillance approach in which every American can test themselves frequently. The Harvard epidemiologist Michael Mina and his colleagues argue for a crash program to roll out of tens of millions of cheap antigen tests that people can take at home.

In an interview published today in The New York Times, COVID-19 task force advisor and National Institute of Allergy and Infectious Disease director Anthony Fauci was asked, "If you had a national plan for testing, what would it be?" He responded by calling for

flooding the system with tests. Getting a home test that you could do yourself, that's highly sensitive and highly specific. And you know why that would be terrific? Because if you decided that you wanted to have a small gathering with your mother-in-law and father-in-law and a couple of children, and you had a test right there. It isn't 100 percent. Don't let the perfect be the enemy of the good. But the risk that you have, if everyone is tested before you get together to sit down for dinner, dramatically decreases. It might not ever be zero but, you know, we don't live in a completely risk-free society.

That would be terrific. Keeping in mind that all politicians' promises are flexible, the Biden presidential campaign put testing at the top its plan to address COVID-19. Specifically, the incoming administration wants to ramp up "next-generation testing, including at home tests and instant tests, so we can scale up our testing capacity by orders of magnitude." Better late than never.