The Supreme Court Won't Save Trump 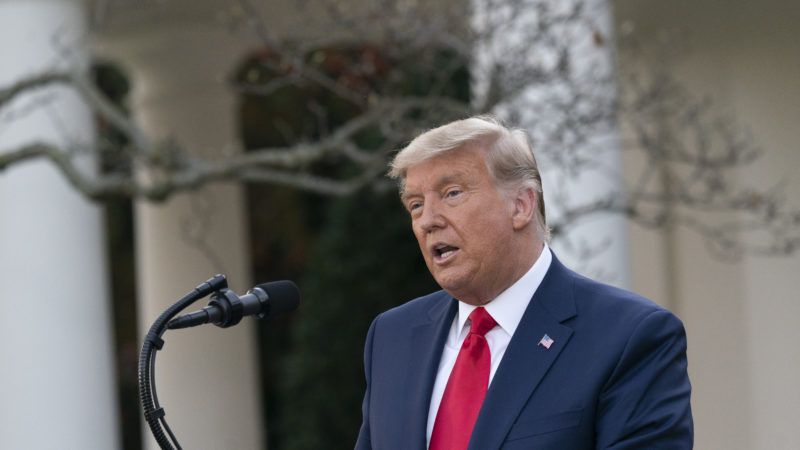 Joe Biden is the president-elect. Yet President Donald Trump continues to deny it, peddling conspiracy theories to explain his defeat at the hands of his Democratic challenger.

Trump has also turned to the courts for help. His campaign has filed a series of increasingly desperate and far-fetched lawsuits that seek to undermine or overturn various votes that went to Biden. But as Reason's Jacob Sullum has noted, "while the president insists the election was 'stolen' through large-scale, orchestrated fraud, the post-election lawsuits fall notably short of making that case."

"We'll be going to the Supreme Court," Trump declared late on election night, as the results were already beginning to turn against him. To be sure, the Supreme Court has gotten involved in a presidential election before. But it won't save Trump now.

In Bush v. Gore (2000), the Supreme Court was faced with the extremely narrow results coming out of Florida, in which, as the Court put it, "the Florida Division of Elections reported that [George W.] Bush had received 2,909,135 votes, and [Al] Gore had received 2,907,351 votes, a margin of 1,784 for Governor Bush." There is no comparison between that tight case and Biden's increasingly lopsided win over Trump. "We opposed each other in Bush v. Gore," declared a recent Washington Post op-ed by the lawyers Theodore B. Olson and David Boies, who represented Bush and Gore, respectively, before the Supreme Court in 2000. "Now we agree: Biden won."

There is one election case currently pending before SCOTUS in which the Trump team might have a prayer of winning. At issue in Republican Party of Pennsylvania v. Boockvar is a September 17 decision by the Pennsylvania Supreme Court allowing state officials to count mail-in ballots received up to three days after Election Day, so long as those ballots were postmarked by November 3. The state court's ruling also said that ballots with no postmark or with an illegible postmark could be presumed to have been filed in a timely manner if they were received in that same three-day post-election window.

On October 28, the Supreme Court denied a motion to expedite consideration of the petition for review filed by the Pennsylvania Republican Party, which is seeking to have the state court's ruling overturned. In a statement accompanying that denial, Justice Samuel Alito, joined by Justices Clarence Thomas and Neil Gorsuch, argued that the Supreme Court should have gotten involved right then and there. "That question has national importance," Alito wrote, "and there is a strong likelihood that the State Supreme Court decision violates the Federal Constitution."

But even if the Supreme Court now agrees to hear the case and rules very rapidly in favor of the Trump side, none of that will matter for the ultimate outcome of the 2020 election. That is because Biden won enough other votes in Pennsylvania that he would still win the state even if the contested mail-in ballots at issue in Boockvar were thrown out.

"He won because the Election was rigged," Trump tweeted on Sunday. That statement was not actually a concession, of course. But it was probably as close to a concession as the country is going to get from Trump. Either way, Trump's first two words are the ones that matter in the end: "He won." Yes, Biden did.

Don't hold your breath waiting for the Supreme Court to do anything that will help Trump change that result.