The Supreme Court nominee weighs in on a famous case. 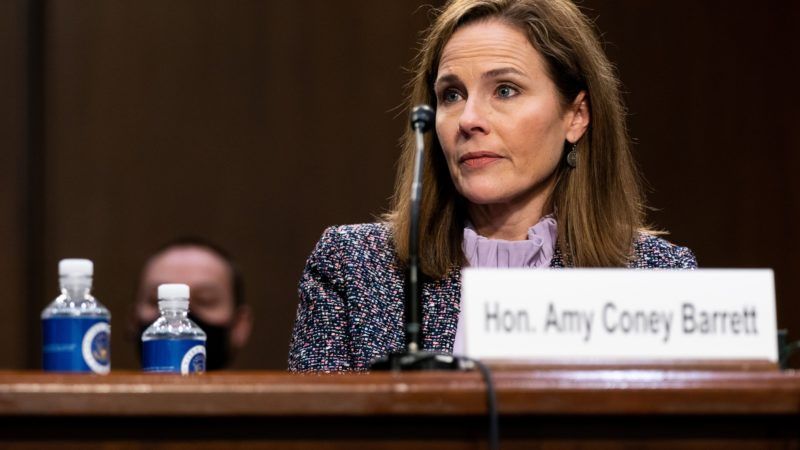 According to the conventional wisdom, Supreme Court nominee Amy Coney Barrett successfully bobbed and weaved her way through her recent Senate confirmation hearings without really sharing any of her substantive legal views. But Barrett did disclose one big thing: She thinks the Supreme Court got it wrong when it protected the constitutional right to economic liberty in the famous case of Lochner v. New York (1905).

On October 14, Sen. Josh Hawley (R–Mo.) asked Barrett to "talk just a little bit about how a court could substitute its own views on economic policy for those of a law-enacting body, of a legislature or of Congress."

"In the Lochner era," Barrett replied, and "in Lochner itself," the Supreme Court "was standing in the way of reforms for workers that legislatures were enacting." Say a federal judge "had a preference for free trade, or if one had a preference for having no minimum wage," she said. "To hold such a statute that did the opposite of your policy preference unconstitutional because it didn't comport with your idea of the best economic policy would be to thwart the will of the people without warrant in the Constitution."

Is that what happened in Lochner? Did the Supreme Court "thwart the will of the people without warrant in the Constitution"?

The Court did thwart those New York lawmakers who wanted to limit the number of hours that bakers were allowed to work each week. But since "clean and wholesome bread does not depend on whether the baker works but ten hours per day or only sixty hours a week," observed the majority opinion of Justice Rufus Peckham, the working hours regulation deserved to be struck down as an illegitimate exercise of the state's regulatory powers.

Unlike the rest of the Bakeshop Act, Peckham explained, which properly and legitimately regulated "washrooms and closets," the height of ceilings, floor conditions, and "drainage, plumbing, and painting," the hours limit involved "neither the safety, the morals, nor the welfare, of the public" and was thus "not, within any fair meaning of the term, a health law." What is more, Peckham held, the provision violated liberty of contract, a constitutional right secured against state infringement by the 14th Amendment.

Peckham was correct about that. The original meaning of the 14th Amendment includes the right to economic liberty. As Rep. John Bingham (R–Ohio), the principal author of Section One of the 14th Amendment, told the House of Representatives, "the provisions of the Constitution guaranteeing rights, privileges, and immunities" includes "the constitutional liberty…to work in an honest calling and contribute by your toil in some sort to the support of yourself, to the support of your fellow men, and to be secure in the enjoyment of the fruits of your toil."

Even those who opposed the 14th Amendment's ratification said as much at the time—which is also good evidence of the amendment's original public meaning. For example, Rep. Andrew Jackson Rogers (D–N.J.) complained to the House in 1866 that "all the rights we have under the laws of the country are embraced under the definition of privileges and immunities….The right to contract is a privilege….I hold if that ever becomes a part of the fundamental law of the land it will prevent any State from refusing to allow anything to anybody embraced under this term of privileges and immunities." The "right to contract" was of course at the center of Lochner.

Despite what Barrett told Hawley, Lochner does in fact have a warrant in the Constitution.