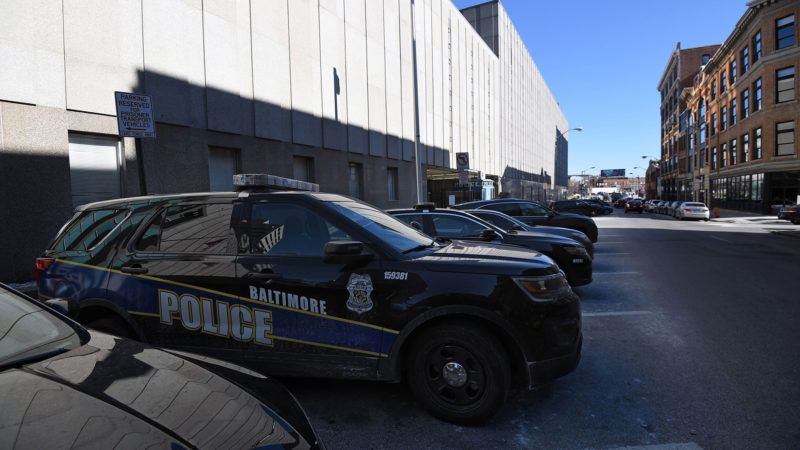 I Got a Monster: The Rise and Fall of America's Most Corrupt Police Squad, by Baynard Woods and Brandon Soderberg, St. Martin's Press, 301 pp., $27.99

If there's a worst-case scenario for police corruption, it would look a lot like the tale told in I Got a Monster: The Rise and Fall of America's Most Corrupt Police Squad.

The book, by the reporters Baynard Woods and Brandon Soderberg, pieces together the story of the 2017 Gun Trace Task Force (GTTF) scandal, in which a federal investigation has so far led to the conviction of a dozen Baltimore Police Department (BPD) officers on charges of robbery, extortion, racketeering, filing false reports, and lying to federal grand juries.

At the center of the story is Sgt. Wayne Jenkins, the head of the GTTF. Jenkins was a hard-charging cop with a fat misconduct file and a talent for turning up illegal guns and drugs. His crew was filled with other bad apples, including one whose habit of excessive force and petty thievery was so well-known that he's been name-dropped in local rap songs. In addition to committing massive overtime fraud, members of the GTTF padded their incomes by skimming seized cash and targeting drug dealers for robberies. As the book recounts in scenes recreated through court records, wiretap recordings, and interviews, the task force fabricated evidence, lied on search warrant affidavits, entered houses without warrants, and used GPS trackers to conduct illegal surveillance.

If this is making you think of the popular antihero from the TV show The Wire who robbed drug dealers, think again. Unlike the fictional Omar, Jenkins and his crew didn't have a code of honor. They seized heroin and cocaine and moved it through their own connections. They planted guns and drugs on innocent people to cover up their mistakes. Sometimes they just did off-the-books home invasions, with no arrests and no paper trail. The titular "monster" is what Jenkins called big targets.

It's no exaggeration to say the GTTF was a criminal enterprise using the Baltimore Police Department as a front.

Opposing Jenkins was Ivan Bates, a defense attorney in the city. Bates kept picking up cases involving GTTF members where the alleged facts didn't add up and his clients insisted that they had been ripped off. He was diligent where his opponents, ensconced in a system tilted in their favor, were sloppy.

Looming over all the events in the book is the 2015 death at police hands of Freddie Gray, which led to a Justice Department investigation into unconstitutional policing in Baltimore. Investigators would end up sharing a wall with the GTTF's office at BPD headquarters.

At the same time that Bates was on Jenkins' trail, he was also defending the six police officers charged in Gray's death. The lawyer saw the prosecution of those officers by Baltimore State's Attorney Marilyn Mosby, and her outrage over the case, as a cynical ploy: He and other defense attorneys had been bringing evidence of dirty cops to Mosby's office for years and were ignored.

Freddie Gray's death set off riots, and in the wake of the turmoil there was a spike in local homicides. A common narrative holds that the BPD simply withdrew from policing during this period. In fact, the police department took the leash off problem cops like Jenkins. "It's time to go out there and do what you know how to do," a deputy commissioner told BPD plainclothes units several months after the riots. Jenkins, whose career had nearly been derailed by a sustained misconduct complaint, was made head of the GTTF in 2016.

The BPD brass wanted guns off the street, and it didn't particularly care how that happened. Jenkins and his crew delivered.

Police departments around the country have used similar plainclothes units, often called "jump-out boys," whose modus operandi is to drive up to groups standing around on the sidewalk, chase anyone who runs, and search anyone who doesn't. A criminal defense lawyer in Washington, D.C., once told me that the unmarked SUVs of the Metropolitan Police Department's vice and gun recovery squads were so common in the poorer wards of the District that when they rolled by, young men on the corner would reflexively lift up their shirts to show they didn't have weapons stuffed in their waistbands.

Several major cities have gotten rid of jump-out squads after years of complaints about harassment and excessive force. The New York Police Department disbanded its plainclothes anti-crime unit this June. Baltimore got rid of its plainclothes units in response to the GTTF scandal in 2017.

The tactics aren't limited to big cities, though. I reported in 2017 on a class-action lawsuit by several residents of Canton, Mississippi, who said the Madison County Sheriff's Department (MCSD) used roadblocks and plainclothes units to illegally harass residents of black neighborhoods. One of the plaintiffs, a 62-year-old woman, said she was hosting a barbecue when several sheriff's deputies jumped out of an unmarked car, detained and searched all her guests without a warrant, found nothing, and then left without explanation. The MCSD settled the lawsuit last year and entered into a court-enforced consent decree to reform its practices.

Woods and Soderberg's book offers a detailed look at the pitfalls of relying on this type of policing. It destroys relations between police and communities—and if it's not outright unconstitutional, it's extremely susceptible to unconstitutional abuses and corruption.

Although I Got A Monster is meticulously reported nonfiction, the writing is good enough to generate a trainwreck fascination in watching Jenkins' schemes start to spiral out of control. But amid a nationwide debate over policing reform, it's more than just an outrageous true crime story. Woods and Soderberg show the bureaucratic and political incentives that allowed dirty cops to flourish within the Baltimore Police Department. Those incentives exist in many other cities, and it would be a mistake to take it on trust that departments elsewhere are immune to the temptations that let the Gun Trace Task Force fester.