There's a fox, a goose, and a bag of grain. And a hippopotamus in the middle of the river. 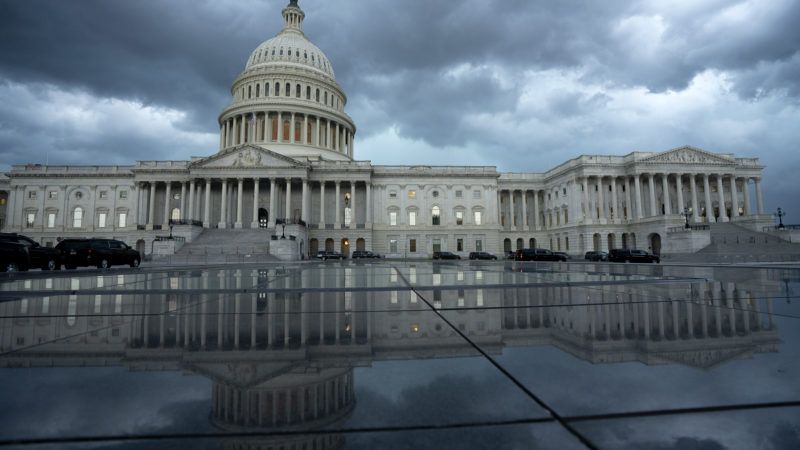 Trying to sort through the latest developments in the negotiations over another COVID-19 stimulus bill feels a little bit like that childhood logic puzzle in which a farmer is trying to transport a goose, a bag of corn, and a fox across a river in a small boat.

House Democrats have already passed a $3 trillion stimulus bill that's essentially a grab-bag of progressive agenda items, but Speaker of the House Nancy Pelosi (D–Calif.) absolutely refuses to go along with a stripped-down stimulus bill being pushed by Senate Republicans. Meanwhile, cunning-as-a-fox Senate Majority Leader Mitch McConnnell (R–Ky.) says his members will return to the nation's capital later this week to vote on a $500 billion emergency spending plan. Neither congressional proposal is a perfect fit with the $1.8 trillion package the White House officials are urging Congress to pass in order to goose the economy before the presidential election.

And there's one more complication that you didn't hear about as a kid: a hippopotamus is loose in the middle of the river.

At any moment, it might surface and destroy whatever happens to be in the boat right now: Either by announcing that he's calling off all negotiations until after the election, as President Donald Trump did last week, or by undermining his own team's official position by urging Congress to "go big or go home," as President Donald Trump did on Tuesday.

For the moment, all parties involved seem more concerned with blaming someone else for why no one is getting across the river. Pelosi says inconsistent signals from the White House and Republicans' unwillingness to bail out states and cities are holding up the process.

"This weekend, the Trump administration issued a proposal that amounted to one step forward, two steps back," Pelosi said in an open letter to her House colleagues on Tuesday. "In fact, in some instances, it makes matters worse."

McConnell says he's focused on providing another round of funding for the Paycheck Protection Program (PPP), which provides loans to small and mid-sized businesses that have kept workers on payrolls during the economic crisis caused by the pandemic. Even though there is bipartisan support for providing more PPP funding, McConnell said in a statement on Tuesday, the program has become a "casualty of Democrats' all-or-nothing obstruction."

When the Senate returns to session on Monday, McConnell says, it will take up legislation to refill the PPP and provide other "targeted relief to American workers." The price tag on that bill remains unknown, but will likely be in the neighborhood of the $500 billion plan outlined by Senate Republicans last month.

Treasury Secretary Steve Mnuchin, who has been handling negotiations for the White House, said Wednesday that the prospects of reaching a deal before the election are dimming. "I'd say at this point getting something done before the election and executing on that would be difficult, just given where we are," Mnuchin told The Washington Post. He's facing opposition on all sides, as Pelosi has criticized the White House's proposal for being too small while Senate Republican leaders convened a conference call last weekend to tell the White House it was asking for too much, the Post reported.

You can't leave the goose alone with the fox or with the bag of corn, of course.

And he has to deal with this, too:

The one thing that no one really seems to be talking about is whether the United States can even afford another massive stimulus bill. The Congressional Budget Office announced this week that the federal budget deficit for the fiscal year that ended on September 30 was a whopping $3.1 trillion—that's three times larger than the deficit recorded in the previous year. The national debt is as large as the U.S. economy and will continue growing for the foreseeable future.

If there's any hope for fiscal sanity to be restored any time soon, it may come in the form of Trump's diminishing prospects for reelection.

"Trump's current political standing seems to have hurt his ability to persuade Senate Republicans to embrace more deficit spending," Politico's Burgess Everett and John Bresnahan report. "Some on Saturday's conference call between Senate Republicans, Mnuchin, and [White House Chief of Staff Mark] Meadows saw the frosty reception for the senior administration officials as a reflection of a party becoming less and less deferential to the president."

Congress is in the unenviable position of trying to balance the country's unsteady long-term fiscal status with the still very real threat of a major economic crisis as the pandemic continues to rage. Still, no matter what the final version of the next stimulus bill looks like, getting it across the river might be easier without the hippopotamus.