The New York Times touches on an old intra-libertarian debate over corporate responsibility. 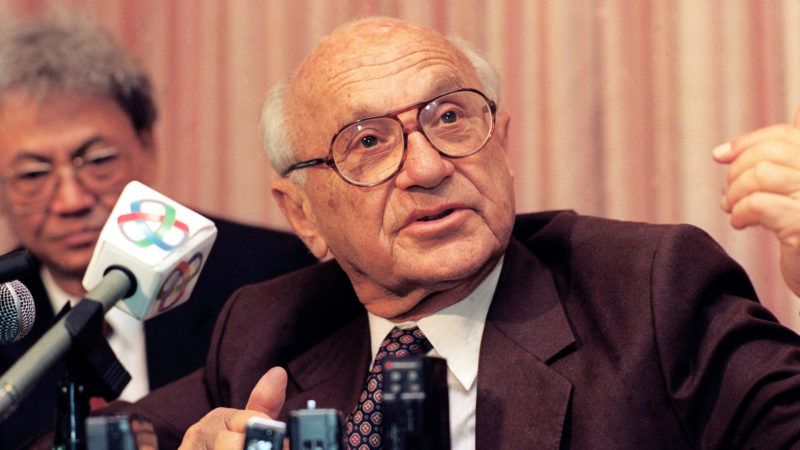 The New York Times brings you news that's news to you: Before evil libertarian Milton Friedman came along, corporations did nothing but help the people in pursuit of "social responsibility."

This is the implication of an overkill series of think pieces and a roundtable hooked to Friedman's essay "The Social Responsibility of Business is to Increase its Profits," which the Times itself ran in 1970. The newspaper now insists, without rigorous evidence, that this article was "arguably the most consequential economic idea of the latter half of the 20th century." (It also argues that businesses are now turning against the idea that their only social responsibility is to their shareholders.)

It would require a lot more facts and analysis than the Times chooses to present to prove that corporations decided in the past 50 years to try to make profits their main concern because of a New York Times article by an economist. People starting and running businesses have traditionally done so to make a living and to make the business do well; attributing this to Friedman's "theories on the primacy of shareholders and the priority of profits" requires more business history and social history than the paper is able to do.

The paper does quote Marc Benioff of Salesforce, angry at Friedman, claiming that in business school in the 1980s Friedman somehow uniquely imbued a generation with the idea that business should be focused on profits. This feels underargued, as does Benioff's insistence that "obsession with maximizing profits for shareholders has brought us: terrible economic, racial and health inequalities; the catastrophe of climate change."

In one contribution to the package, Kurt Andersen, the formerly witty editor of Spy magazine, darkly warns that libertarians like Friedman bamboozled liberals by playing on their affection for the idea of freedom. He widens his attack beyond the specifics of the "corporate social responsibility" anniversary news hook to angrily presume that somehow government is doing a lot less to manage American wealth and choices than it was 50 years ago and that Aquarian Age dumbos hypnotized by the belief that people should be free to be you and me, man, allowed this to happen by elevating Friedman and his libertarian hordes to control of the world.

Andersen also thinks that "Theory of the Firm," a much-cited 1976 journal article by Michael C. Jensen and William H. Meckling that operationalized some of Friedman's ideas, shaped the world because it has been so widely cited in other academic articles, which is at least something toward trying to prove the package's point, but perhaps not everything. Andersen concludes by blaming Friedmanism for many corporations' propensity these days to spend money propping up their own stock prices.

Reason ran 15 years ago a roundtable hashing over these same issues on the article's 35th anniversary.  Many of the points that various Times contributors made this week were already made in our pages then.

John Mackey, founder and CEO of Whole Foods, argued that there were other stakeholders involved in doing business in America whose needs should also be tallied, including "customers, employees, suppliers, and the community. Each of those groups will define the purpose of the business in terms of its own needs and desires, and each perspective is valid and legitimate."

Mackey suggested that some of Whole Foods' philanthropy, such as "5 percent giveaway" days to local charities, actually attracts customers. Lest Friedmanites accuse him of taking food from the mouths of his poor investors, he notes that those investors should be well aware that the company doesn't do everything it can to maximize profits and willingly chose to invest anyway. (Not even Friedman would argue that some investors might not choose to invest in such a company, even if he believed it should never be insisted on as a corporate duty.)

Mackey also bragged about the high level of profits his company still managed to make with this perspective. He called on an older "free market authority" than Friedman, Adam Smith, to argue that "human nature isn't just about self-interest. It also includes sympathy, empathy, friendship, love, and the desire for social approval. As motives for human behavior, these are at least as important as self-interest. For many people, they are more important."

In Friedman's contribution to the Reason roundtable, he told Mackey that there was little disagreement between them but rhetoric, and that much of Whole Foods' philanthopy obviously did help its bottom line. That said, Friedman added it's hard to know whether any resources that Whole Foods shifts to a charity "would do more good for society than investing that stream of profit in the enterprise itself or paying it out as dividends and letting the stockholders dispose of it." Such corporate charity, he said, "makes sense only because of our obscene tax laws, whereby a stockholder can make a larger gift for a given after-tax cost if the corporation makes the gift on his behalf than if he makes the gift directly."

Mostly, Friedman just didn't believe centralizing that giving with corporate boards is any way to guarantee true overall social benefit: "Maximizing profits is an end from the private point of view; it is a means from the social point of view," he wrote in the Reason roundtable. "A system based on private property and free markets is a sophisticated means of enabling people to cooperate in their economic activities without compulsion; it enables separated knowledge to assure that each resource is used for its most valued use, and is combined with other resources in the most efficient way."

Friedman here was rather narrowly focused on the question of using corporate money to give to charity, as opposed to the larger question of whether corporations should just not make certain choices that earn them money if those choices could be seen as harming people outside their shareholders. Such choices might involve hiring decisions, pollution, and decisions about where to locate their businesses.

The third contributor to our roundtable, T.J. Rodgers of Cypress Semiconductors, posited that it is "simply good business for a company to cater to its customers, train and retain its employees, build long-term positive relationships with its suppliers, and become a good citizen in its community, including performing some philanthropic activity," Rodgers wrote. "When Milton Friedman says a company should stay 'within the rules of the game' and operate 'without deception or fraud,' he means it should deal with all its various constituencies properly in order to maximize long-term shareholder value. He does not mean that a company should put every last nickel on the bottom line every quarter, regardless of the long-term consequences."

Rodgers saltily wondered: "Why is it that when Whole Foods gives money to a worthy cause, it serves a high moral objective, while a company that provides a good return to small investors—who simply put their money into their own retirement funds or a children's college fund—is somehow selfish?"

Rodgers also challenged those who believe what corporations generally do—sell goods and services that people choose to consume to make their lives better, providing jobs while doing so—is not in itself a "social good." He asked Mackey to contemplate all the good we get from the cheap and abundent semiconductors that Rodgers' company makes and sells. This wonderful result, he said, came about because his industry is "focused so relentlessly on increasing its profits, cutting his costs in the process."

In any case, there certainly are things for a consistent libertarian to question in Friedman's original article, particularly his belief that pollution—which imposes harms on others—is something corporations should care about only as much as the law requires them to. But this idea that he introduced a new and pernicious idea to American business culture is…underproven.