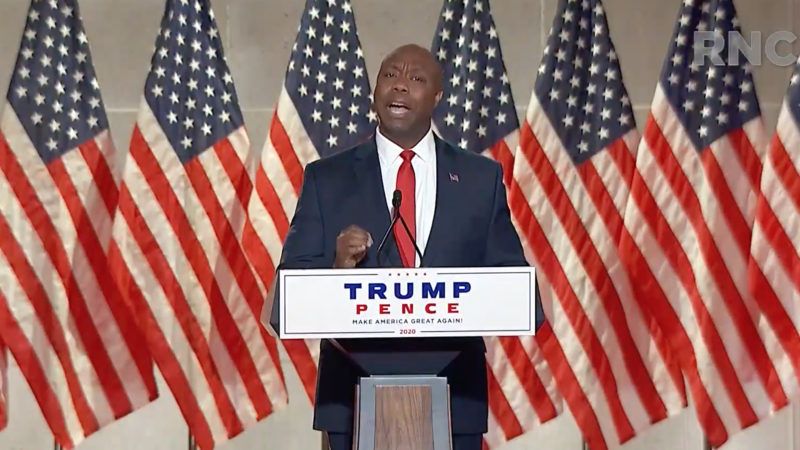 Speakers at the first night of the 2020 Republican National Convention tried to navigate two competing messages on the criminal justice system. One was that Joe Biden was an architect of mass incarceration and lock-em-up policies, which Donald Trump rightfully rolled back. The other message was that only Republicans will stand up for police and the law.

Sen. Tim Scott (R–S.C.), the only black Republican in the Senate, assailed Joe Biden for his role in the 1994 crime bill and creating sentencing disparities between crack and powder cocaine.

"Trump fixed many of the disparities that Biden created and made our system more fair and just for all Americans," Scott said, referring to the passage of the 2018 FIRST STEP Act.

Georgia Democrat Vernon Jones, venturing into hyperbole, claimed that Trump "ended once and for all the policy of incarceration of black people." (Although the legislation did result in the release of several thousand federal inmates, it did not abolish the federal prison system, Reason regrets to report.)

But at the same time that speakers were lauding Trump for criminal justice reforms that rolled back some of the laws that Biden helped pass, they were making constant references to riots, violent criminals being let loose on the street, and the threat of antifa mobs coming to your suburban neighborhood once the Marxist Democrats defund the police.

Trump's son, Donald Trump, Jr., said that "what happened to George Floyd was a disgrace."

However, Trump, Jr., continued: "We can not lose sight of the fact that police are American heroes. They deserve our appreciation. No matter what Democrats say, we know that when we call 911 we don't want our call to go to voicemail. Defunding the police is not an option."

Backing the blue has been one of the centerpieces of Trump's "LAW AND ORDER!" reelection campaign. Trump's campaign released a 2nd term agenda Sunday night, seeking to put to rest questions of what exactly, if anything, the president and Republicans stand for. The list of about 50 bullet points includes five under the heading "Defend Our Police."

The Republican Party decided to forgo releasing a party platform this year, instead simply saying it supports Trump's agenda. So this thin gruel, along with speeches at this week's RNC, are what constitute the Republican positions on criminal justice.

The section on bail is the most interesting, if confusing. States and counties control their own bail policies. It's unclear what, if anything, the Trump administration could do about it. Criminal justice reform advocates across the country have fought cash bail in recent years, most notably and controversially in New York. Republicans have latched on to those efforts to ban cash bail, which traps poor people in jail based simply on their inability to pay, to say that Democrats want to let dangerous criminals out of jail—never mind the presumption of innocence.

Although it will probably come to nothing but more culture war fodder, the inclusion of a pro-cash bail item in Trump's 2nd term agenda is a clearer sign of the Trump administration's priorities on criminal justice than a bill signed two years ago.