Americans Dislike Both Biden and Trump 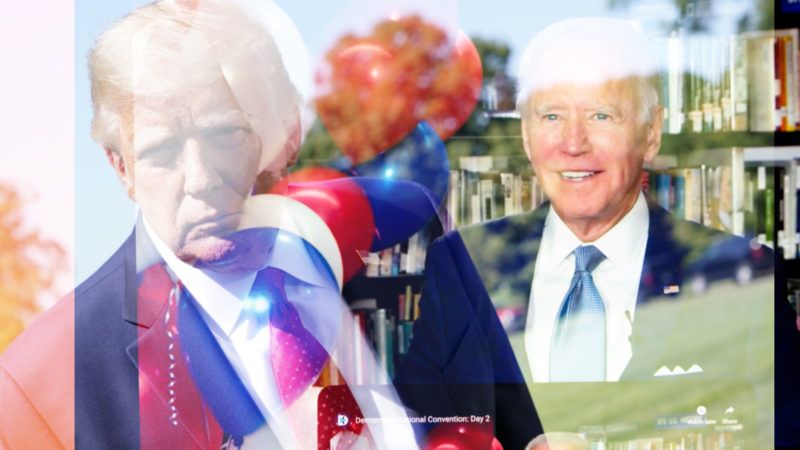 On the opening night of the Democratic National Convention, former First Lady Michelle Obama begged voters to resist the urge to refrain from voting or to vote for third-party candidates. "This is not the time to withhold our votes in protest or play games with candidates who have no chance of winning," the former first lady exhorted whatever audience, perhaps out of masochism, chose to tune in to the virtual convention.

It was a fitting moment of desperation—and one that should be echoed at the Republican convention—given the disdain many Americans hold for the presidential candidates of both legacy parties. Once again, we're being asked to pick between candidates that just aren't up to the job.

"As both political parties prepare for their conventions, one in four Americans do not think either of the major-party presidential candidates would be a good president," Gallup noted last week. "The current percentage saying neither candidate would make a good president is the highest on record."

Unfortunately, one of those hopefuls is almost certain to win or retain power over a government that has too much say in our lives.

It's no wonder that in 2016, millions of voters picked Libertarian Gary Johnson or Green Jill Stein or declined to vote at all rather than choose between Hillary Clinton and Donald Trump. That year, the Democratic and Republican nominees headed into Election Day "with the worst election-eve images of any major-party presidential candidates Gallup has measured back to 1956."

The 2020 election represents an ongoing demonstration that America's governing apparatus is trapped in the embrace of the rotting corpses of once-dynamic political organizations. Democratic and Republican Party hearts and minds may have died, but they refuse to loosen their grip on political office—and on voters.

And, out of habit or old lessons remembered too long, most Americans dutifully confine their choices to these two moldering options, no matter how unpleasant the task. The result, as The New York Times reported in June, is "the second straight presidential contest in which both candidates are viewed negatively by a majority of voters."

With those kinds of numbers, non-party-loyalists who feel absolutely compelled to pick between the zombie Democrats and zombie Republicans are going more by who they oppose than by enthusiasm for the nominees themselves.

"Half of the nation's electorate says they have ruled out voting for Donald Trump in November, while 4 in 10 say the same about Joe Biden," the Monmouth University Polling Institute found last month. "Overall, 21% of all registered voters do not have a favorable opinion of either party's nominee."

That process of elimination doesn't mean that voters ruling out one legacy party nominee are binding themselves to the other. There are alternatives: Libertarian Party candidate Jo Jorgensen, a psychology lecturer, seems an apropos alternative as the high-profile candidates credibly accuse each other of senility; the Green Party's Howie Hawkins is neither Biden nor Trump; and millions of voters will completely take a pass on casting a ballot in-person, by mail, or in any other way.

But chances are that either Donald Trump will retain the presidency, or Joe Biden will displace him. And all the signs point to many Americans casting their votes not for the candidate they like, but rather against the candidate they dislike.

Hate-voting is a growing phenomenon in American politics. "Hostility toward the opposing party has eclipsed positive affect for ones' own party as a motive for political participation," researchers reported in a 2018 paper published by Political Psychology. The authors of that paper, Shanto Iyengar and Masha Krupenkin, also found that "while partisan animus began to rise in the 1980s, it has grown dramatically over the past two decades."

It's this hostility to political opponents that apparently sustains what's left of the legacy parties—not for their own sakes, but as counters to the despised opposition. People may not like their own standard-bearers very much, but they prop them up as weapons against the other side.

Alan Abramowitz and Steven Webster, political scientists at Emory University, call this "negative partisanship—the phenomenon whereby Americans largely align against one party instead of affiliating with the other." In a 2018 paper, they describe negative partisanship as "one of the most important developments in American politics over the last 40 years."

Hate-voting is a hell of a way to run a semi-functioning democracy. It suggests that the government is on ground as shaky as that occupied by the legacy political parties.

"The fact that so many Americans in both the last election and this one have expressed an aversion to each of the major candidates speaks to the heavy polarization that now defines the national electorate—not to mention the wholesale disillusionment many voters feel with the political system," The New York Times's Giovanni Russonello observed.

Perhaps—just a thought here—a political system in which so many Americans have lost faith is one that shouldn't exercise as much power over people's lives as does the government with which we're saddled. When millions of Americans who will have to live with the outcome of the election "do not think either of the major-party presidential candidates would be a good president," it's a good sign that the consequences of elections should be less important.

Getting Americans to like each other, let alone doddering legacy party political candidates, is a goal beyond anybody's reach. But making government less important might lower the stakes a bit so that it doesn't matter all that much when unfit candidates win office.