The episode reflects poorly on Biden. 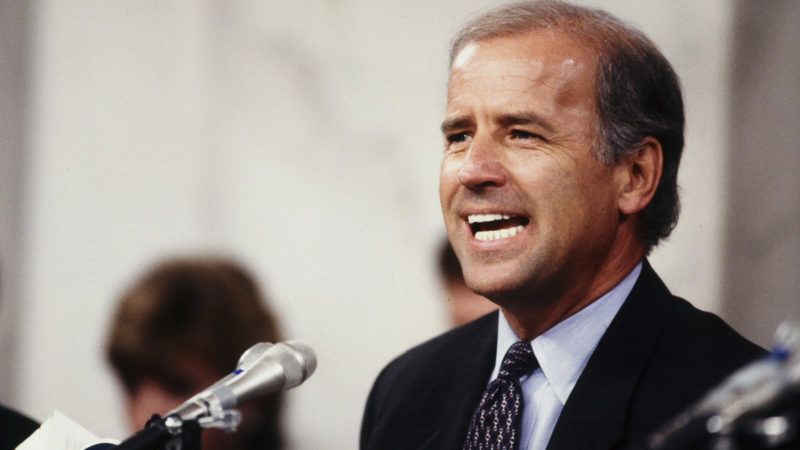 How long has Democratic presidential hopeful Joe Biden been in the political game? Long enough to have been at the center of a smear campaign during the Senate confirmation hearings of the longest-serving member of the current U.S. Supreme Court.

The 1991 showdown over Supreme Court nominee Clarence Thomas is mostly remembered today for the accusations of sexual misconduct leveled by Anita Hill. But the hearings actually kicked off with Senate Judiciary Committee Chair Joe Biden trying to discredit Thomas as a crazy libertarian and reckless judicial activist.

"I assure you I have read all of your speeches, and I have read them in their entirety," Biden told Thomas shortly after the nominee's opening statement. "And, in the speech you gave in 1987 to the Pacific Research Institute, you said, and I quote, 'I find attractive the arguments of scholars such as Stephen Macedo who defend an activist Supreme Court that would'—not could, would—'strike down laws restricting property rights.'"

"It has been quite some time since I have read Prof. Macedo," Thomas replied. "But I don't believe that in my writings I have indicated that we should have an activist Supreme Court."

Biden claimed that he didn't buy it. "Quite frankly, I find it hard to square your speeches," he told the nominee, "with what you are telling me today."

Thomas gave the speech in question at the Pacific Research Institute in San Francisco on August 10, 1987. It touched on a number of issues, including the views of Stephen Macedo, then an assistant professor in the government department at Harvard University and the author of The New Right v. the Constitution, a 1987 book published by the libertarian Cato Institute. The book made a case for "principled judicial activism."

Macedo's book was basically an extended critique of Robert Bork, the highly influential conservative legal thinker who championed a thoroughgoing doctrine of judicial deference. The "first principle" of the U.S. system, Bork insisted, was majority rule, not individual rights. What Bork's view meant in practice was that the federal courts should defer to lawmakers in most cases. "In wide areas of life," Bork argued, "majorities are entitled to rule, if they wish, simply because they are majorities."

Which brings us back to Thomas. Here is his 1987 Macedo quote in full:

I find attractive the arguments of scholars such as Stephen Macedo who defend an activist Supreme Court, which would strike down laws restricting property rights. But the libertarian argument overlooks the place of the Supreme Court in a scheme of separation of powers. One does not strengthen self-government and the rule of law by having the non-democratic branch of the government make policy. Hence, I strongly support the nomination of Bob Bork to the Supreme Court. Judge Bork is no extremist of any kind. If anything, he is an extreme moderate, one who believes in the modesty of the Court's powers, with respect to the democratically elected branches of government.

So yes, Thomas said he found Macedo's arguments "attractive." But then Thomas immediately faulted Macedo and endorsed Bork, the very figure that Macedo was trying to bring down. In other words, Biden ripped Thomas' words out of context to give them the opposite meaning of what Thomas actually said.