Armed agents of the state shouldn't be enforcing mask mandates. 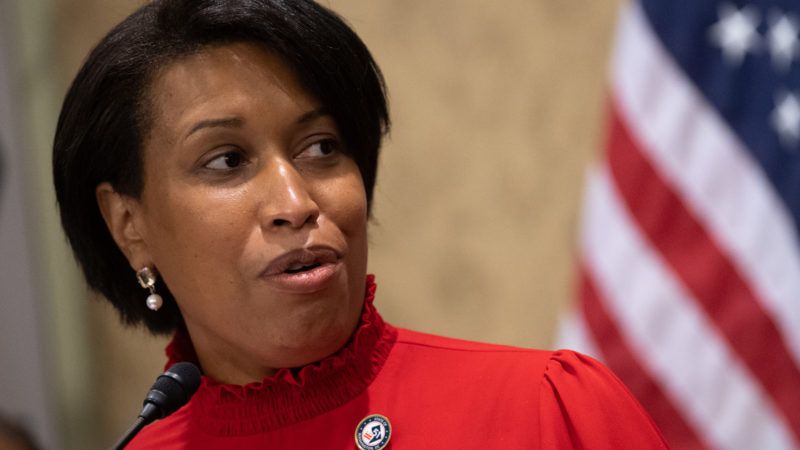 D.C. Mayor Muriel Bowser is advising retailers to call the police if they catch shoppers without face coverings in violation of her mask order.

Bowser's mandate—extended on July 22—requires that all persons wear a mask outside of their residence when they will be interacting with someone "for more than a fleeting time" and that "businesses, office buildings, and other establishments open to members of the public" post signage to apply that rule internally.

Videos have gone viral of shoppers across the country resisting such rules. A woman at a North Hollywood Trader Joe's threw a fit after store attendants requested she don a mask: "Democratic pigs!" she screamed. She later claimed he was "yelling in self-defense."

Bowser was explicit about what shopkeepers should do if they encounter anyone who flouts her own mandate. "They should call the police and the police will enforce it," she said during a press conference yesterday.

Two things can be true: Masks are an effective tool in curbing the spread of COVID-19, and we don't need armed agents of the state policing that behavior.

If there was ever a time when politicians should understand the latter, it's now. The debate around police reform took center stage just last month following the late-May killing of George Floyd, who died after a former Minneapolis police officer dug his knee into Floyd's neck for almost nine minutes. Floyd was suspected of using a fake $20 bill.

Bowser herself has been supportive of efforts to improve the criminal justice system, having signed a police reform bill last week. "Black Lives Matter is very critical of police. They're critical of me," Bowser said shortly after renaming the street across from the White House 'Black Lives Matter Plaza' and commissioning a Black Lives Matter (BLM) road mural. "That doesn't mean that I don't see them and support the things that will make our community safe."

Siccing police on mask-deniers is probably not the best approach to upholding her end of the bargain.

Bowser isn't the only mayor to use cops for a mask mandate. Police in Miami have reportedly set up "mask traps," issuing $100 tickets to those who violate the area's mandatory order. "One woman, Johanna Gianni, says she removed her mask in the parking lot of a Publix grocery store in North Miami Beach, when a police officer approached her and wrote her a ticket for not wearing a mask," writes Christian Britschgi. "Gianni told the Herald the parking lot was nearly empty and that she felt set up by police."

Miami Mayor Francis Suarez, a Republican, explained his reasoning in a Washington Post op-ed, in a co-byline with Vin Gupta, an assistant professor of health metrics sciences and pulmonary/critical care medicine at the University of Washington Medical Center. "In short, warnings to anyone not wearing a mask need to be backed up with the threat of fines and, for chronic offenders, even arrest," the two write. "There is no time to waste on half-measures."

Disregarding Bowser's order carries up to a $1,000 fine, as well as possible prosecution in D.C. Superior Court. Notably, it "shall not apply to any employees of the federal government while they are on duty." Police are similarly not required to wear them while out on patrol.