NIMBYism comes in many different ideological stripes. Fewer homes and higher rents is always the result. 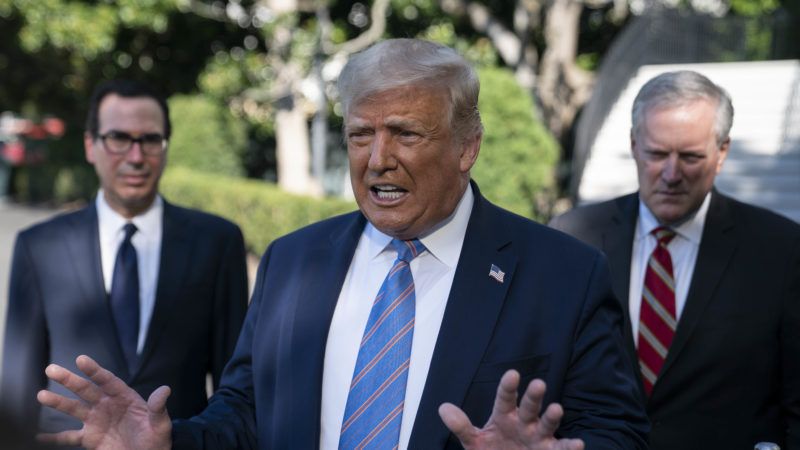 In an apparent bid to shore up his support among progressives in the San Francisco Bay Area, President Donald Trump is promising to prevent the construction of new low-income housing in suburban neighborhoods.

"I am happy to inform all of the people living their Suburban Lifestyle Dream that you will no longer be bothered or financially hurt by having low income housing built in your neighborhood," Trump said on Twitter, referencing his recent repeal of the Obama-era affirmatively furthering fair housing (AFFH) rule. "Your housing prices will go up based on the market, and crime will go down. I have rescinded the Obama-Biden AFFH Rule. Enjoy!"

…Your housing prices will go up based on the market, and crime will go down. I have rescinded the Obama-Biden AFFH Rule. Enjoy!

The old "Obama-Biden" AFFH rule did not, in fact, force suburban communities to allow low-income housing construction. Instead, the rather obscure regulation required states and localities who received federal housing funds to report on obstacles to fair housing.

The substance of that now-replaced rule is likely much less important to Trump than its symbolism as an example of the federal government forcing change onto localities that don't want it.

In that sense, the president shares a lot in common with many of his progressive detractors in deeply blue areas of the country who are also happy to use regulation to keep new housing at bay, and who organize against attempts from higher levels of government to force them to accept new development.

This would include places like Lafayette, California, a wealthy San Francisco suburb nestled in Contra Costa County, where 69 percent of voters supported Hillary Clinton in 2016. Its residents fight to stop a "very urban," "unsightly" 315-unit housing development was recently profiled by The New York Times.

Over in the suburban community of Cupertino, California—hardly Trump country—local activists spent years trying to stop the development of an abandoned mall into apartments, half of which would be rented out to lower-income tenants at below-market rates.

In the famously liberal city of Berkeley, California, activists often argue against new housing on the grounds that it will threaten their community's sustainable character.

"Berkeley needs to prioritize a livable, sustainable environment for people who already live here," said one resident at a 2018 Zoning Adjustment Board meeting, when opposing a 57-unit development of student housing. "We are not obligated to sacrifice what is best about Berkeley to build dorm rooms."

In February, Curbed reported on how the group Livable California had created an ideology-spanning coalition that included Green Party members, explicit socialists, and anti-gentrification activists to oppose efforts to loosen restrictions on building dense housing.

In San Francisco proper, anti-gentrification groups frequently lead the charge against new apartment buildings, deploying arguments that blend concerns about rising rents and displacement with worries about "monster" developments changing the character and demographics of neighborhoods and (in at least two cases reported by Reason) casting shadows on nearby parks.

Frequently, activists' crusades against particular projects include demands that developers build only 100 percent below-market-rate housing, something Trump now says he's against on principle. Nevertheless, activists' demands for only affordable housing often mean they end up stopping or delaying market-rate projects that would include a significant number of affordable units.

Trump's attacks on the AFFH rule as an example of federal overreach mirror housing policy fights in California, where anti-development activists of all ideological stripes have opposed state bills that would require local governments to allow for more housing near transit lines and job centers.

The most recent iteration of this idea, Senate Bill (S.B.) 50, was opposed by a number of "equity groups" for including insufficient protections against displacing current residents. Other groups like Housing Is a Human Right—a project of the AIDS Healthcare Foundation—argued against S.B. 50's liberalization of market-rate development as "trickle-down housing." That group is instead backing a rent control ballot initiative.

NIMBY (Not in My Backyard) opposition to new housing development is very much a cross-ideological phenomenon. NIMBYs on the right might put more emphasis on property values and crime. Those on the left will fret about gentrification and environmental sustainability. Regardless of the rhetoric, or even intent, the result is less housing gets built, and housing costs go up.

It's unlikely that Trump will pick up too many votes in the blue suburbs of blue cities, but his defense of local control and low-density zoning probably isn't hurting him there.