The Second Amendment Is Not Restricted to White Conservatives

An encounter between militias in Louisville shows the enduring practical and symbolic importance of the right to armed self-defense. 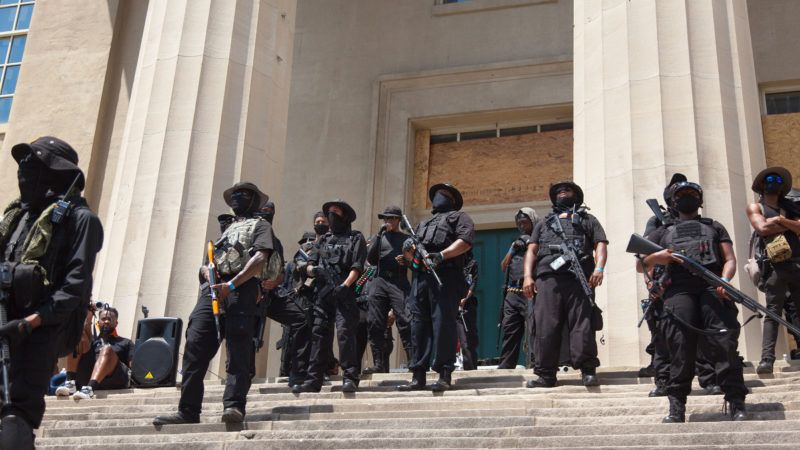 Last Saturday in Louisville, Kentucky, about 300 armed members of the NFAC (Not Fucking Around Coalition), a self-described "black militia" based in Atlanta, had what the Louisville Courier-Journal called "a tense standoff" with about 50 armed Three Percenters, which the paper described as a "far-right…militia." While the incident, which ended without violence, could be seen as yet another sign that the country is descending into 1968-style chaos, it was also a striking illustration of the Second Amendment's enduring practical and symbolic importance that scrambled conventional stereotypes about the right to armed self-defense.

Since Kentucky allows open (or concealed) carrying of firearms without a permit, the two groups, both of which disavow aggression, were acting lawfully. And while their motives may look different, both are drawing on a long American tradition of wide gun ownership as a safeguard against tyranny.

NFAC members came to Louisville in support of protests provoked by the shooting of Breonna Taylor, an unarmed 26-year-old African-American woman who was killed by white police officers during a fruitless drug raid on March 13. The circumstances of Taylor's death gave the guns carried by those militia members added significance.

Plainclothes police officers broke into Taylor's apartment in the middle of the night based on meager evidence that a detective used to obtain a no-knock search warrant. Mistaking the armed invaders for robbers, Taylor's boyfriend, Kenneth Walker, grabbed a gun and fired a single shot that struck one officer in the leg.

The cops responded with a hail of bullets, at least eight of which struck Taylor and several of which entered a neighboring apartment. Prosecutors initially charged Walker with attempted murder of a police officer but dropped that charge in May.

As Rep. Tom McClintock (R–Calif.) observed last month, "the invasion of a person's home is one of the most terrifying powers government possesses," and "every person in a free society has the right to take arms against an intruder in their homes." While McClintock was emphasizing the dangers posed by no-knock warrants, his comments also raised the question of how Americans, no matter their skin color, can defend themselves against police officers who behave like criminals.

NFAC has one answer. By parading with military-style rifles of the sort that Joe Biden, the presumptive Democratic presidential nominee, wants to ban, the militia's members show they are prepared to exercise the Second Amendment rights that gun control supporters typically portray as a fetish of white conservatives.

The assertion of those rights resonates historically, since modern gun control laws have their roots in the efforts of Southern states to disarm freedmen, depriving them of a constitutional right that Chief Justice Roger Taney, author of the Supreme Court's infamous 1857 decision in Dred Scott v. Sandford, warned black people would enjoy if they were recognized as citizens. Under Jim Crow and during the civil rights movement, the right to armed self-defense was vitally important to African Americans resisting government-imposed white supremacy.

The Three Percenters, by contrast, were responding to NFAC's presence in Louisville, aiming to "aid police" (as the Courier-Journal put it) in maintaining order. Yet the group, which rejects the "militia" label and disavows racism, also describes itself as defending civil liberties and resisting the illegitimate exercise of government power.

You need not endorse the tactics or ideologies of these organizations to recognize that both are relying on a legal legacy that makes mainstream Democrats like Biden uncomfortable. As the Supreme Court recognized in its landmark 2008 decision overturning the District of Columbia's handgun ban, the Second Amendment was based partly on the premise that "when the able-bodied men of a nation are trained in arms and organized, they are better able to resist tyranny."

The fact that two opposing groups are dedicated to defending the right of armed self-defense should not be surprising. The Second Amendment, like the First, is of value to people with divergent backgrounds and political views. Gun controllers should stop pretending otherwise.