In attempting to appeal to everyone, the Democratic presidential candidate misses the mark. 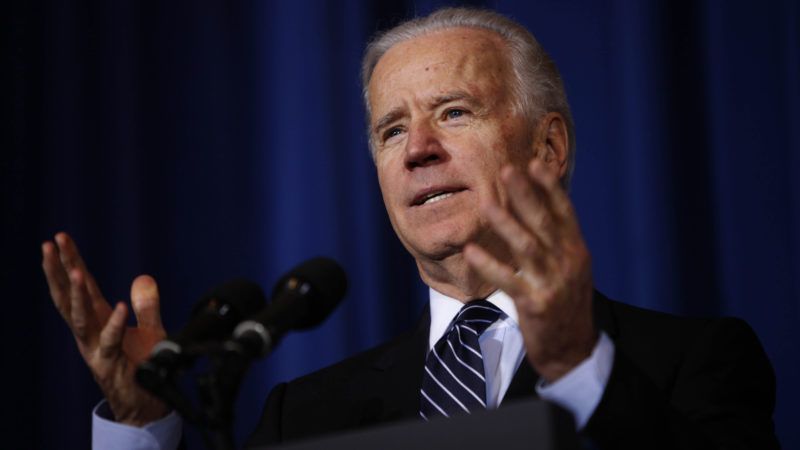 Presumptive Democratic presidential nominee Joe Biden has spent decades managing a "moderate" balancing act. The result is a wobbly policy platform that attempts to appeal to everyone but feels fully satisfactory to few.

Take the candidate's collaboration with Bernie Sanders, the Vermont senator who recently ran against him for the Democratic nomination. Over the last few months, the duo's "Unity Task Force" tackled a host of issues, including qualified immunity, the legal framework that lets public officials who violate your rights avoid federal civil rights suits.

A tripartisan push is underway to change this. Reps. Justin Amash (L–Mich.) and Ayanna Pressley (D–Mass.) introduced a bill recently to end the doctrine entirely. Though the GOP has been slower to warm to the subject, Sen. Mike Braun (R–Ind.) crafted his own legislation that would radically alter qualified immunity, allowing officials to invoke it only when relevant case law, federal regulation, federal statutes, and state statutes specifically permit the conduct in question—essentially reversing the current approach, in which officials are held liable only if the way they violated your rights has been described with exacting detail in previous case law.

Where does Biden fall on the issue? It's not completely clear. "We will also act to ensure that victims of federal, state, or local law enforcement abuses of power can seek justice through civil litigation by reining in the doctrine of qualified immunity to increase police accountability," the task force's recommendations read. We can't be sure what exactly that means, though we know that the Sanders faction wasn't happy about it. The panel "got into heated debates" over qualified immunity specifically, reports Politico. "Progressives pushed to end it, but Biden appointees agreed only to sign onto a commitment to rein in the rule."

"It either exists or it doesn't," noted journalist Radley Balko on Twitter. "You can't tell the courts to only enforce it in the cases where you support it."

Biden's hesitance here isn't surprising in the context of his attempt at a middle-of-the-road modus operandi. But even the Democratic House police reform bill proposed to eradicate the doctrine for cops. (Amash's and Braun's respective bills apply to all public officials, such as corrupt college administrators.) Biden's tepid response here is more in line with moderates in the Republican Party than his own party.

Remember that Biden was a spirited force behind the 1994 crime bill. With its three-strike rule, that landmark legislation saw many people sentenced to life in prison for a violent felony if they had been convicted of two prior offenses, including drug crimes. But his problematic record does not begin and end with that law. Biden conceded last year that one measure he helped push through the Senate—sentencing disparities for crack versus cocaine—was a "big mistake." Last month he said concerns surrounding his criminal justice record are "legitimate."

Pledging concretely to scrap qualified immunity is an opportunity to protect the sorts of vulnerable Americans he failed to take into account in 1994. Consider some of the people who have used qualified immunity as a shield over the years. Like the cops in Fresno, California, who allegedly stole $225,000 while executing a search warrant. Or the cops who assaulted and arrested a man for standing outside of his own home. Or the sheriff's deputy who shot a 10-year-old, or the officer who shot a 15-year-old. Or the prison guards who locked an inmate in two cells, one filled with raw sewage and the other "massive amounts" of human feces.

Biden's demurral on qualified immunity makes more sense—as politics, not as policy—in light of the candidate's cozy long-term relationship with police unions. He was at the front lines of a yearslong effort to pass a federal Police Officer's Bill of Rights, which would have made it considerably more difficult to investigate police misconduct internally. Though the bill never become law as a standalone piece of legislation, an altered version was included in the Biden-Thurmond Violent Crime Control Act.

Just five years ago, Biden was lauding his 1994 crime bill at a dinner for the National Association of Police Organizations (NAPO), a group of police unions and related associations. "There wouldn't have been a Biden crime bill," he said in May 2015, "there wouldn't have been that crime bill that put 100,000 cops in the street in the first place were it not for the fact that from the very beginning [NAPO] was the staunchest, staunchest advocate for it."

But that group doesn't seem any happier with Biden's compromises than criminal justice reformers are. "For Joe Biden, police are shaking their heads because he used to be a stand-up guy who backed law enforcement," said Bill Johnson, executive director of NAPO. "But it seems in his old age, for whatever reason, he's writing a sad final chapter when it comes to supporting law enforcement."

As of now, though, that final chapter doesn't seem to include a sunset on qualified immunity.