Finding a steady job is the best way to keep a person from going back to prison or jail. These changes make a lot of sense. 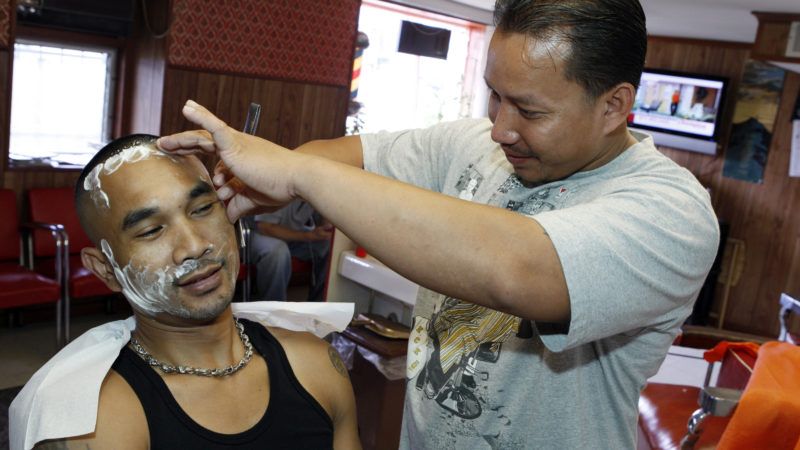 More than two dozen licensing boards in Pennsylvania will no longer be able to use vague "good character" provisions to block individuals with criminal records from getting permission to work in the state thanks to sweeping occupational licensing reforms signed into law last week by Gov. Tom Wolf (D).

The reforms will provide new economic opportunities for Pennsylvanians who have previously been convicted of a crime. Those individuals will now be able to pursue work as barbers, cosmetologists, accountants, and various other fields.

"Arbitrarily denying someone a job license because of outdated rules against
criminal records is wrong," Wolf said in a statement. He said the bill would benefit "skilled workers, their employers, and the economy for all of us."

The bill cleared the Republican-controlled state legislature with bipartisan support—yet another indication that licensing reform is an area of bipartisan agreement in a political environment where few good things can be described that way.

The new Pennsylvania law will ban 29 licensing boards from using broad and vague language to effectively prohibit anyone with a criminal history from obtaining a license.

"They can be disqualified from earning licenses in specific occupations even if their original charge had no relation to the license," says Jessica Barnett, a senior policy analyst with the Commonwealth Foundation, a free market think tank. "And many are barred from obtaining a license even after taking the opportunity to be trained while in prison."

Now, each board will have to draw up a list of specific offenses that will be considered disqualifying. That will allow licensing boards to, for example, keep people with a history of violent crimes from working in certain fields, while ensuring that a years-old nonviolent drug offense doesn't make it impossible for someone to find a good job. Licensing boards will also be prohibited from rejecting an applicant due to juvenile or expunged criminal records.

Pennsylvania joins more than a dozen other states that have passed similar laws in recent years. While they are primarily economic measures aimed at sweeping aside unnecessary and onerous licensing rules, there's also an element of criminal justice reform embedded in these licensing reforms. About 600,000 Americans are released from prison every year, and research shows that employment is the best indicator of whether they will end up back behind bars. In states with stricter licensing laws, recidivism rates are unsurprisingly higher.

According to research from The Pew Center for the States, reducing recidivism by as little as 10 percent could reduce state correctional budgets by an average of $15 million annually. And a 2011 study by the Economy League of Greater Philadelphia found in 2011 that securing jobs for only 100 formerly incarcerated people in the City of Brotherly Love would net $55 million in lifetime earnings and more than $2 million in future tax revenues while saving at least that much annually by keeping those same people out of the criminal justice system.

Pennsylvania's reforms are, as Wolf says, a win-win-win scenario.