Touching Your Phone While Driving Is Now Illegal in Idaho, Illinois, and Indiana 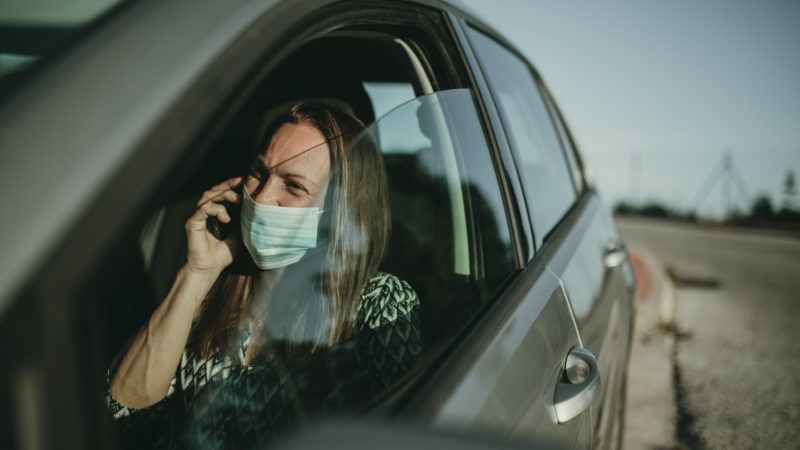 As Americans celebrate Independence Day this week, state authorities will be armed with all sorts of new ways to restrict our liberty and control us. This includes several states starting to crack down on any cellphone use while driving—and giving police a new pretense for pulling people over.

One such place is Illinois, where it's now illegal for drivers to so much as touch a cellphone, laptop, or tablet while driving. The state has also started to ban drivers from streaming any videos, and from smoking cigarettes in a vehicle if there's someone under age 18 in it.

Idaho, too, will ban drivers from using cellphones or any other handheld devices, including when they're stopped at a traffic light or stop sign, starting today.

Similarly, in Indiana, touching a phone while driving is now off-limits. "You can however make phone calls using a hands free device, or there will be exceptions for calling 911 in an actual emergency situation," notes WOMI.

In South Dakota, drivers are now banned from using their phones for anything other than talking—and cops can pull over people if they think they see them looking at a phone. (What could go wrong?)

"Texting and driving already was a secondary offense in South Dakota, meaning a driver had to be pulled over for another reason in order to be ticketed," notes the Sioux Falls Argus Leader. "But the new state law expands banned uses to include taking photos, using the internet, posting to social media, reading emails and using phone apps, and makes it a primary offense, meaning drivers can be pulled over for only using a cell phone." The offense is classified as a Class 2 misdemeanor.

South Dakota is also making it a Class 2 misdemeanor offense to join a funeral procession you don't belong to.

New vaping and smoking laws in Indiana. The state has more than 100 new rules taking effect today, including raising the legal age to purchase tobacco or vape products to 21, doubling the fine for people who sell these products to people under age 21, and banning new stores that sell tobacco from setting up shop within 1,000 feet of any school.

More gun regulations and higher tobacco taxes in Virginia. The state is launching a range of new gun regulations July 1, including banning the buying of more than one firearm in 30-day time span, requiring a background check for all gun purchases, and "allowing attorneys and law enforcement officers to apply for emergency orders to prohibit a person who poses a substantial risk of injury to himself or others from purchasing, possessing or transporting a firearm," explains Fairfax County's website.

The state is also raising taxes on cigarettes (from 30 to 60 cents per pack) and creating a new tax of 6.6 cents per milliliter of vape fluid.

Tax and fee increases are also coming, as are regulations that will burden small businesses still reeling from the COVID-19 lockdowns.

For instance, in California, 13 places—including both large cities (like San Francisco and Los Angeles) and smaller ones—will see minimum wage increases today, raising the rate for any business with one to 25 employees to between $13 and $15.40 per hour. Minimum wage hikes will be higher for bigger businesses and for hotels of any size.

California will also start requiring businesses whose independent contractors were recently redefined as employees to start carrying worker's compensation insurance on them.

Utah, meanwhile, is raising fees on people who bring in boats from out of state.

And authorities all over have cooked up a range of new ways to limit people's civil liberties, impede due process, and exact revenge on violators.

Sex-crime panic in Colorado. "Use or dissemination of a recording or photo without consent" will now trigger a requirement that someone be added to the state's sex offender registry. Meanwhile, paying for sex with someone under age 18 is now enough to be convicted of human trafficking. The state's new human trafficking law also stipulates that not knowing a minor's age is no defense.

Panhandling ban in Indiana. The state is making asking for money within 50 feet of an ATM, public monument, or business entrance a crime. (The American Civil Liberties Union is already suing.)

Illegal gambling expansion in Virginia. The state is widening its definition of illegal gambling to include "the playing or offering for play of any skill game."

Tennessee ratchets up penalties for already dubious crimes. "A new law passed this year cracking down on those who flee an arrest," reports 1057 News. "The measure requires an offender evading arrest to pay restitution if he or she recklessly damages government property."

But there's some good news in this batch of July 1 law changes, too.

Virginia is decriminalizing marijuana, dropping mandatory minimums for license lawbreakers, stopping collection of marriage/race data, letting nurse practitioners perform abortions, ditching their ultrasound law, and extending absentee voting. In a report on the July 1 changes, the state explains that simple marijuana possession under the new law "provides a civil penalty of no more than $25," whereas the old law "imposes a maximum fine of $500 and a maximum 30-day jail sentence for a first offense, and subsequent offenses are a Class 1 misdemeanor." People in Virginia can also administer naloxone to someone who is overdosing without getting in trouble.

The state will also start:

It is also eliminating a requirement that a woman seeking an abortion get an ultrasound before offering informed written consent.

In addition, Virginia will extend "no-excuse absentee voting" to a 45-day period. And it will start letting localities make their own decisions about monuments on public property.

Educator licensing simplified in Oklahoma. The state is making it easier for teachers licensed in another state to obtain a teaching certificate in Oklahoma.

Indiana waives gun fees. The state is extending the period of time its gun licenses are good for from four to five years and waiving all state and local fees associated with gun licensing except for fingerprinting costs.

Beer in barbershops. Maryland will start letting barbershops and beauty salons serve beer and wine on premises during business hours.

Florida takes steps toward school choice and more humane treatment of prisoners. Florida is expanding tax credits and scholarship programs for private schools, as well as making some makes small attempts to better protect pregnant women who are incarcerated. (The law, however, still "maintains current provisions related to the use of restraints on pregnant prisoners" and allows for these restraints, and body cavity searches, so long as facilities have written policies pertaining to them.)

South Dakota loosens voter ID law, protects sexual assault evidence, and limits the criminalization of addiction during pregnancy. The state will start letting people use forms of ID other than a driver's license to register to vote. In addition, DNA evidence collected in sexual assault investigations will have to be kept longer, up from one year to at least seven years, or until the victim reaches the age of 25. And "certain controlled substances offenses shall be dropped for a woman who is pregnant if she: receives adequate prenatal care from a licensed health care professional during her pregnancy; enrolls in an addiction recovery program before the child is born, remains in the program after the birth and completes the addiction recovery program," notes the Argus Leader.

Tennessee takes a step toward deregulating health care: "State lawmakers voted this year to expand Tennessee's Health Care Empowerment Act to allow all licensed medical professionals, instead of only physicians, to use direct medical care agreements without regulation by the insurance laws of this state," notes 1057 News. "The Health Care Empowerment Act is designed to give healthcare consumers who are struggling to pay the increasing costs of premiums or who have been priced out of the market, an affordable option to contract directly with their physician for health care services. The new law holds that a person seeking medical care outside of an insurance plan, TennCare or Medicare programs and chooses to pay out of pocket, does not forfeit their coverage plan."

Defying the good/bad binary are a few laws that are just plain weird or amusing. For instance, "Hoosier employers will no longer be able to force potential employees to get microchips implanted into their bodies," notes RTV6 Indianapolis.

A Florida law taking effect today "aims to crack down on the abuse of emotional support animal certifications."

Tennessee will start allowing sidewalk robots, so as long as they don't travel at a speed greater than 10 miles per hour.