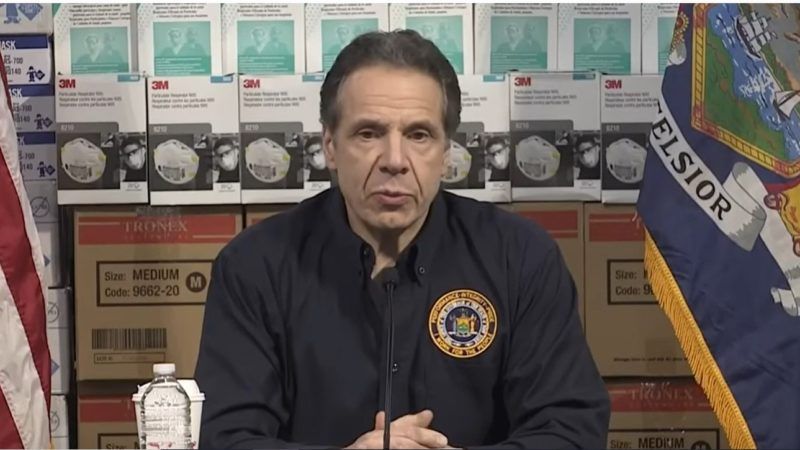 Today a federal judge in Albany, New York, ordered state and local officials to stop enforcing COVID-19 control measures that impose special restrictions on religious services. Responding to a lawsuit brought by two Roman Catholic priests from upstate New York and three Orthodox Jews from Brooklyn, U.S. District Judge Gary Sharpe concluded that the state's rules, which limit indoor services to 25 percent of capacity and outdoor gatherings to no more than 25 people, are not "generally applicable," meaning they are subject to strict scrutiny under the First Amendment's guarantee of religious freedom, a test they cannot satisfy.

Sharpe noted that New York has drawn several seemingly arbitrary distinctions between religious and secular activities that pose similar risks of virus transmission. "On its face," he writes, "the 25% indoor capacity limitation applies only to houses of worship." Meanwhile, the state is allowing "nonessential" businesses such as offices, stores, salons, and restaurants to operate at 50 percent of their capacity.

"Restaurant patrons sit and congregate with family and friends in close proximity for a lengthy period of time, and have close contact with their hosts and servers," Sharpe notes. "Face coverings may be removed while [diners are] seated." And when it comes to special educational services, the state has imposed no indoor limit at all during the summer term. Since "these secular businesses/activities threaten defendants' interest in slowing the spread of COVID-19" at least as much as religious services do, Sharpe says, their preferential treatment "demonstrate[s] that the 25% indoor capacity limitation on houses of worship is underinclusive," which "triggers strict scrutiny review."

New York's rules for outdoor gatherings are equally puzzling. Although the state "has specifically authorized outdoor, in-person graduation ceremonies of no more than 150 people," Sharpe notes, the limit for outdoor religious gatherings, including funerals and weddings, is 25, regardless of the precautions that participants take. Furthermore, Gov. Andrew Cuomo and New York City Mayor Bill de Blasio, like many public health experts, endorsed and encouraged recent protests against police brutality that attracted far more than 25 people, many of whom did not wear masks or follow social distancing guidelines.

"Governor Cuomo and Mayor de Blasio could have just as easily discouraged protests, short of condemning their message, in the name of public health and exercised discretion to suspend enforcement for public safety reasons instead of encouraging what they knew was a flagrant disregard of the outdoor limits and social distancing rules," Sharpe writes. "They could have also been silent. But by acting as they did, Governor Cuomo and Mayor de Blasio sent a clear message that mass protests are deserving of preferential treatment."

De Blasio's attitude toward Jews who dared to gather outside for religious purposes was notably different. "Something absolutely unacceptable happened in Williamsburg tonite," the mayor tweeted on April 28, the day he personally led a police raid on a Hasidic rabbi's funeral in that neighborhood of Brooklyn. "When I heard, I went there myself to ensure the crowd was dispersed. And what I saw WILL NOT be tolerated so long as we are fighting the Coronavirus."

De Blasio added: "My message to the Jewish community, and all communities, is this simple: the time for warnings has passed. I have instructed the NYPD to proceed immediately to summons or even arrest those who gather in large groups. This is about stopping this disease and saving lives. Period."

Such discrimination against religious activities, Sharpe says, is clearly problematic under the Supreme Court's precedents regarding laws that impinge on religious freedom. The Court has said neutral, generally applicable laws that happen to restrict religious activities are consistent with the First Amendment. But it also has said laws that impose special burdens on religious activities are unconstitutional unless they are narrowly tailored to achieve a compelling government interest that cannot be achieved through less restrictive means. In this case, Sharpe says, "defendants' generally-stated compelling interest in controlling the spread of COVID-19 is inadequate to demonstrate that they have a compelling interest that is narrowly tailored to these specific plaintiffs."

Last month, when the Supreme Court declined to issue an injunction against California's restrictions on religious services, Chief Justice John Roberts reaffirmed that state officials have wide authority to protect the public from communicable diseases. "When those officials 'undertake[] to act in areas fraught with medical and scientific uncertainties,' their latitude 'must be especially broad,'" he wrote. "Where those broad limits are not exceeded, they should not be subject to second-guessing by an 'unelected federal judiciary,' which lacks the background, competence, and expertise to assess public health and is not accountable to the people."

In this case, Sharpe writes, "it is plain to this court that the broad limits of that executive latitude have been exceeded." His injunction requires Cuomo, de Blasio, and New York Attorney General Letitia James to refrain from "enforcing any indoor gathering limitations against plaintiffs" stricter than those imposed on "nonessential" businesses such as stores and salons, "provided that plaintiffs follow social distancing requirements as set forth in the applicable executive orders and guidance." Cuomo, de Blasio, and James are also forbidden to enforce "any limitation for outdoor gatherings," except for the general rules that also apply to secular gatherings.

State and city officials say they are reviewing Sharpe's decision before deciding on their next steps. Catholic League President Bill Donohue celebrated the ruling. "The Catholic League encourages people of faith to ignore all future restrictions placed on them by de Blasio and Cuomo," he said. "They exposed themselves as frauds when they gave the green light to thousands of protesters who took to the streets, night after night, while imposing draconian restrictions on the faithful….They got creamed in court, which is exactly what they deserve."