A Second Amendment hypocrite with a plan to undermine federalism 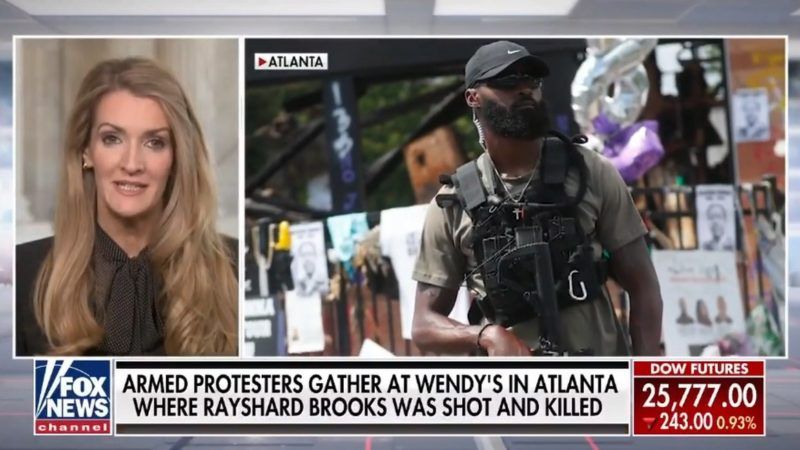 Is Loeffler the rare conservative politician with a history of calling for expanded gun controls? That doesn't appear the case. Here's a tweet from her from January expressing appreciation for National Rifle Association President Carolyn Meadows:

Great to be back in Atlanta with @NRA President and fellow Georgian, Carolyn Meadows. Truly appreciate her work in Washington and around the country to protect and defend our 2nd Amendment Rights. #gapol pic.twitter.com/CAWS9FbEUk

What could possibly make a pro-gun-rights senator suddenly take such a dim view of citizens' rights to bear arms? Watch this Wednesday segment from the Fox show America's Newsroom, and the answer becomes apparent pretty quickly:

Joined @edhenry on @AmericaNewsroom to discuss my efforts to end the defund the police movement & pass the #JusticeAct. Enough with the political games from Democrats in Washington. Americans deserve better. #gapol #gasen pic.twitter.com/uopR5jiJHU

As you can see, Fox interviewed Loeffler amid a montage of young, armed black people protesting police abuse in Atlanta, where a cop recently shot and killed Rayshard Brooks. Another Fox host, Sean Hannity, reported on Tuesday that there were "at least three men brandishing long guns" near the Wendy's where the incident happened.

Hannity, Fox, and Loeffler all represented this as evidence of the dangers of defunding police. Indeed, one young man with a gun (who seemed perfectly polite and respectful) told Fox he was carrying a 12-gauge shotgun because he didn't believe police officers would protect him, adding that cops were not going to be "allowed" in this space. Asked what he'd do if police rolled up and ordered him to drop his weapon, the man insisted he had the legal right under the Second Amendment of the Constitution to bear arms: "And at no point will I allow my right to be disturbed." Good for him!

Carrying long guns in public is legal in Georgia, by the way (with exceptions for a few places like courts and schools). Fox does not actually accuse any of these men of breaking any laws. But they clearly intend viewers to see these men as a threat—and not just because they have put up barricades and hope to shut out the police, but because they're bearing arms. By contrast, when a predominantly white group of protesters showed up at Michigan's capitol in April to protest the state's COVID-19 rules, Fox's coverage was reasonably neutral and factual, giving voice to critics but pointing out that guns were legally allowed in the state Capitol building.

Loeffler isn't just a hypocrite about gun rights. She's trying to undermine another value conservatives are supposed to believe in: federalism. The senator is introducing legislation that would reduce federal transportation funding from states and municipalities that cut funding to law enforcement, unless they can show a "clear budgetary need." The idea that the states and cities should have to get permission from the U.S. government to make a budget decision is, of course, absolutely anathema to local rule. It's up to a community's citizens to determine how much money their police department should receive—not the U.S. Senate or the Department of Transportation.