They’re not likely to succeed, but the real goal is to seize any money he makes. 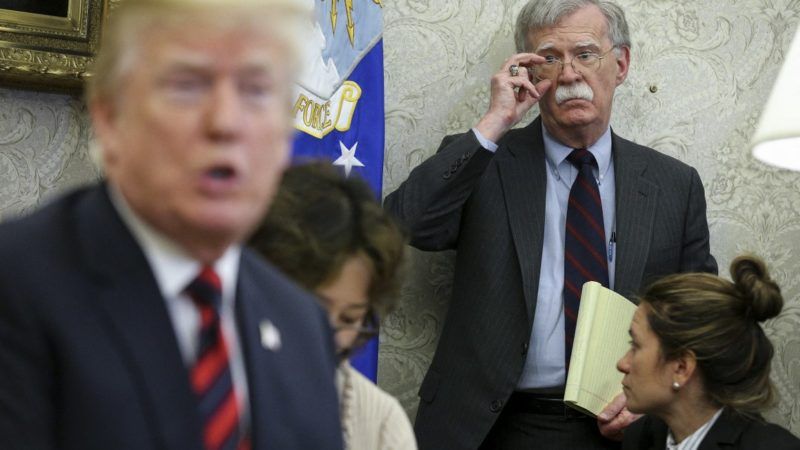 The Justice Department is suing to try to block John Bolton, former national security adviser, from releasing his White House tell-all The Room Where It Happened.

It's extremely unlikely they'll stop the book's release, which is slated for next week, but what they're really going after is the money Bolton will make off of it.

The Room Where It Happened purports to document the inner operations of President Donald Trump's White House from spring 2018 to fall 2019, when Bolton served. The Amazon summary of the book says Bolton saw a president who cared only about getting reelected regardless of whatever impact it had on national security. He argues that the dealings with Ukraine (trying to make government officials dig up dirt on former Vice President Joe Biden) that led to Trump's failed impeachment were not isolated: "Trump's Ukraine-like transgressions existed across the full range of his foreign policy—and Bolton documents exactly what those were, and attempts by him and others in the Administration to raise alarms about them."

The summary is also full of Boltonesque whining that Trump's foreign policy was all about making friends with foreign leaders and not nearly enough saber rattling, so we can fully expect his criticism of Trump to partly revolve around Bolton not getting the harshly punitive or even militaristic responses to conflicts with countries like North Korea or Iran that he wants.

But that's not really what's at issue here. Because of Bolton's role in government, there's a lengthy review process that requires that the book's contents be scrutinized before publication so as not to reveal classified information. This is part of a binding agreement that all federal employees with high-level access to secret information have to sign. Violate the agreement and the feds have the power to take former employees to court to demand all the profits the book makes.

According to the lawsuit, filed in the U.S. District Court for the District of Columbia, Bolton submitted the book to National Security Council (NSC) staff for the review process in December 2019. Bolton was told in January that the book contained significant amounts of classified information that would have to be deleted before publication. Nevertheless, publisher Simon & Schuster began advertising the book's pending release in January and a New York Times story that month discussed the contents of the manuscript, even though it had not passed review. According to the lawsuit, Bolton was already violating his non-disclosure agreement with the federal government by discussing what was in the book with others.

The NSC allegedly completed the review of the book in April and determined that, though he had excised confidential information, the book was not yet cleared to publish. Bolton was told the process for approval was ongoing. Then, a second review of the book was ordered in May at the urging of Trump's assistant for National Security Affairs. (The lawsuit claims these higher-ups had greater access to top-level intelligence reports and would be better able to recognize confidential information in Bolton's book.)

Bolton and Simon & Schuster pushed forward anyway after completing the initial review and have scheduled the book's general release for June 23.

The lawsuit is attempting to force Bolton to yank the book until he completes the review process and asking Simon & Schuster to delay the release and retrieve any copies currently in the hands of third parties. Failing that, the Justice Department wants to force Bolton to fork over any money he may derive from the publication of the book (including movie rights).

While this all looks like a high-profile feud between Trump and Bolton, the reality is that Bolton is far from alone in his fight to disclose what happens in high levels of government, nor is such a struggle confined to the Trump administration. The Knight First Amendment Institute at Columbia University, partnering with the American Civil Liberties Union, filed suit in 2019 challenging the constitutionality of prepublication review, representing five former government employees.

Their lawsuit argues that the review process violates both the First and Fifth Amendments for censoring the authors via a vague and inscrutable system that takes months or even a year to complete. They argue the reviews often result in overly broad demands for content to be deleted, without any real analysis of whether disclosure of such information would actually cause harm to the nation's security or any determination of whether the classified information had already been made public. They also argue the censorship orders are sometimes biased based on the content: Books that criticize the CIA's torture of prisoners have historically been more heavily redacted than books that praise the CIA's methods.

Their lawsuit in the U.S. District Court of Maryland was dismissed in April when the court agreed with the government that the prepublication system is constitutional. The Knight First Amendment Institute is appealing.

It's ironic that Bolton may end up in the same boat as whistleblower Edward Snowden. Bolton accused Snowden of treason for revealing the government's secret surveillance of American citizens and declared in 2013 that Snowden's disclosures were a "grave threat to national security."

Last year, when Snowden published Permanent Record, which detailed his decision to reveal the National Security Agency's surveillance, the Justice Department did the same thing to him that they're trying to do to Bolton (and they succeeded—a federal judge gave the feds permission to seize Snowden's proceeds for the book because he did not complete the prepublication review process).

Read the lawsuit against Bolton here.