The episode illustrates the perils of confirmation bias on both sides of the debate about disease control measures. 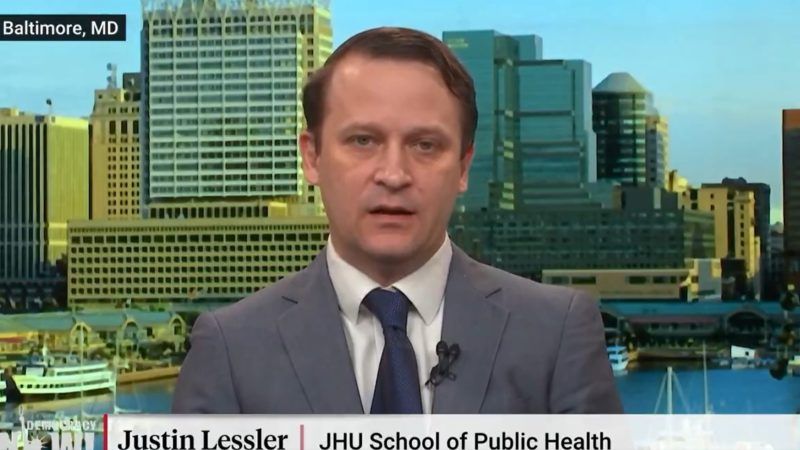 A month ago, The New York Times published an internal Trump administration document that predicted the United States would be seeing 3,000 COVID-19 fatalities per day by June 1, raising the national death toll above 200,000. The document also projected that the daily number of new confirmed cases would exceed 200,000 by then—i.e., by now.

"The numbers underscore a sobering reality," the Times reported. "The United States has been hunkered down for the past seven weeks to try slowing the spread of the virus, but reopening the economy will make matters worse." It said "the projections confirm the primary fear of public health experts: that a reopening of the economy will put the nation back where it was in mid-March, when cases were rising so rapidly in some parts of the country that patients were dying on gurneys in hospital hallways."

The projections that supposedly confirmed that fear were widely cited by people who argued that states such as Florida, Georgia, and Texas were inviting a public health disaster by lifting their lockdowns too soon. But the projections turned out to be wildly off, predicting more than three times as many daily deaths as we have seen so far in June, nearly twice as many total deaths as of June 1, and nine times as many daily new cases.

Lockdown supporters have since moved on from those obviously erroneous predictions. But the way they were loudly touted and then quietly abandoned illustrates the perils of confirmation bias for people on both sides of the overheated debate about COVID-19 control measures.

The White House immediately disavowed the alarming projections highlighted by the Times, saying the document did not reflect the views of the administration's coronavirus task force. The projections "should not be taken as a forecast," White House Press Secretary Kayleigh McEnany cautioned. "This 'study' considered zero mitigation, meaning it was conducted as though no federal guidelines were in place, no contact tracing, no expansion of testing, while removing all shelter in place protocols laid out in the phased approach of the Opening Up America Again guidelines for individuals with co-morbidities."

For critics who believed the president and like-minded governors were bent on reopening the economy, no matter the cost in human lives, those reassurances carried little weight. But according to the epidemiologist who produced the projections, they were a work in progress based on one possible scenario that he did not necessarily view as likely.

The document leaked to the Times is identified as the work of the Federal Emergency Management Agency (FEMA) and the Department of Health and Human Services (HHS). Some of the pages also carry the logo of the U.S. Centers for Disease Control and Prevention (CDC), which is part of HHS. While the White House and some press accounts described the projections as the CDC's work, they were actually produced by Justin Lessler, an epidemiologist at Johns Hopkins University's Bloomberg School of Public Health, under a contract with FEMA.

The day after the Times story appeared, NPR interviewed Lessler, who described the projections as "preliminary work" that was "always intended to be shown to people who were fully aware that this was work in progress, not a final result." NPR noted that the projections reported by the Times were "based on only about one-third of the scenarios that Lessler will be including in the final projections." It explained that "the incomplete projection published in The New York Times of more than 200,000 new cases and more than 3,000 new deaths per day by June 1 is just one of many possible scenarios."

How much confidence did Lessler have in that particular projection, which has since been decisively contradicted by reality? "I do not know if it is likely," he said.

Lessler told NPR he did not know who created the graphs in the leaked document or for whom they were intended. "To see an incomplete version of his work disseminated and discussed so publicly was all the more unnerving," NPR reported, because "it's obvious from the graph that the simulations he's run thus far are not that robust—since they fail to predict the actual number of deaths to date." That's a detail the Times might have noticed if it hadn't been so eager to present the document as evidence of recklessness.

By now the Times, an enthusiastic advocate of lockdowns in its news reporting as well as its editorials, has consigned this embarrassing episode to the memory hole. But it provides a lesson for all of us, regardless of what we think about the merits of sweeping restrictions on movement and economic activity as a response to the COVID-19 epidemic. Human beings have a strong tendency to latch onto evidence, no matter how dubious, that reinforces what they already believe. There is no hope of eliminating that cognitive bias. The best we can do is try to keep it in mind.