The perpetual scapegoat for unrest 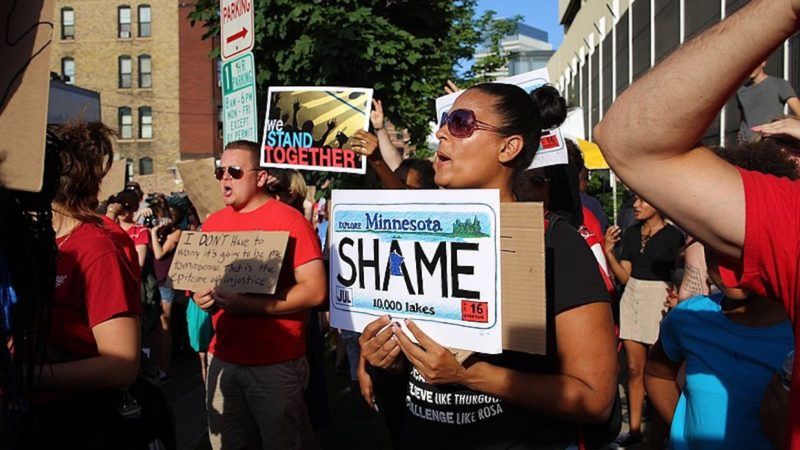 Feeling uneasy about the disorder erupting at recent protests against police brutality? Don't worry, the authorities have an explanation: It was the outside agitators what done it.

St. Paul Mayor Melvin Carter claimed Saturday morning that "every single person" arrested in his city the night before had been from out of state. Minnesota Gov. Tim Walz reiterated the idea that the troublemakers were outsiders: His "best estimate," he said, was that "about 80 percent" of the rioters were from elsewhere. Minneapolis Mayor Jacob Frey warned that "white supremacists, members of organized crime, out of state instigators, and possibly even foreign actors" were trying "to destroy and destabilize our city and our region." President Donald Trump didn't agree with Frey's list of culprits—"It's ANTIFA and the Radical Left," he proclaimed—but he grabbed hold of the governor's number, tweeting as a settled fact that "80% of the RIOTERS in Minneapolis last night were from OUT OF STATE."

By the end of the day, those figures had fallen apart. KSTP-TV reported that St. Paul had seen 18 civil unrest arrests from Thursday through Saturday morning; just four of the arrestees were clearly from out of state, with two more of uncertain origins. In Minneapolis too, the vast majority of the people arrested were in-state. St. Paul's mayor soon conceded that he had given out bad information, and by Saturday evening KARE-TV was reporting that the governor "declined to repeat" his 80 percent claim. (KARE also pushed back, less conclusively, against Frey's list of villains: "Of those arrested from out of state, only one had a Facebook page [with] clearly identifiable support of white supremacy.")

Now, that still leaves enough gaps in the evidence to keep the outside-agitator story alive if you really like it. After all, you can project pretty much anything you want onto the masked rioters who weren't arrested. Some of those projections may even turn out to be true, or half-true, or related in some familial way to truth.

But mostly they'll be wishful thinking.

Activists do travel to protests in other parts of the country, of course. Leninist grouplets drove down to Ferguson; Oath Keepers headed out to the Bundy ranch. And yes, people with their own agendas sometimes try to escalate violence—though they don't necessarily come from out of town to do it. Visitors are often peaceful, and hotheads can be homegrown. Sometimes they almost have to be homegrown: Given how many places are boiling over right now, it's hard to believe that they're all in thrall to outsiders sweeping in from someplace else.

Hard to believe, but convenient to believe. Whether you're a civic leader trying to preserve your town's reputation, a cop unhappy at the thought that so many citizens resent your department, or an activist who wants to wave away elements of your movement that you don't like, it can be comforting to displace everything onto a stock villain, be it Soros or Putin or anarchists or fascists or all of them working in concert in a Prague graveyard. Gov. Walz insisted that he "wasn't trying to deflect" when he raised the specter of out-of-state rioters. But even if that's true of Walz, it certainly isn't true of every person who took his comments and ran with them.

Such beliefs are so convenient, in fact, that they've cropped up many times before. There's a long history of dubious rumors about outside agitators—some of them "possibly even foreign," as Mayor Frey might say. The most infamous cases were in the Jim Crow South, when segregationists regularly claimed that most blacks were satisfied with their lot and that any conflict was the creation of the national civil rights movement. But there are plenty of other examples. Antebellum southerners convinced themselves that white abolitionists were stirring up slave revolts. 20th century politicians blamed race riots on Bolsheviks right after the Russian revolution, on the Japanese during World War II, on the Soviet bloc in the '60s. After the first flareup of the 2015 Baltimore riots, city leaders tried to attribute the violence to "isolated pockets of people from out of town." That tale fell apart the same way the similar storyline did in Minnesota: Nearly all the rowdies arrested that night turned out to be locals.

With the outside agitator as your scapegoat, it becomes easier to ignore some significant distinctions. The word "antifa" starts to get used as a synonym for "any radicals who smash things," whether or not they're involved with the antifa movement. Bernie Kerik, a former New York police commissioner who wound up serving time, tried to rope in Black Lives Matter too, declaring Friday that "paid left wing radical groups like Antifa, Black Lives Matter and others" were "responsible for extreme violence against innocent civilians, looting and arson"—even as reports from the ground had Black Lives Matter activists trying to rein in looters and vandals. You hear similar confusions when people on the left worry about far-right infiltration of the protests. Much of the gun-toting boogaloo subculture is sympathetic to the protesters, since it shares their complaints about police abuses, yet it gets constantly conflated with right-wing accelerationists who hope to start a race war. People apparently find it pleasing to treat their enemies as one big ball of alien influence.

And yes: It's entirely possible that some acts of vandalism were carried out by people pretending to be things they're not. But you're fooling yourself if you think they all were. There really are activists who think property destruction is a valuable form of protest, and it doesn't take much effort to find them. I've known some of them for decades; if they're agents provocateurs, they sure are playing a long game.

Sometimes complaints about outsiders are just a way to informally excommunicate people you'd rather not have on your side. Protesters have sharp disagreements about both tactics and long-term goals, and it's not surprising to see reluctant comrades trying to read each other out of the movement. At times those divisions even fall along an insider/outsider line. When, say, black activists object to white marchers vandalizing businesses in their neighborhood, the vandals might not be from out of state but they still aren't from around here. But there's a clear difference between those sorts of messy fissures and a narrative that tries to reduce those complications to an external conspiratorial force.

Urban legends are resilient, and I don't expect this one to disappear anytime soon. On Sunday, Sen. Marco Rubio (R–Fla.) reenacted the Minnesota show, tweeting that "Only 13 of the 57 people arrested" at a Miami protest "live in the City. Some of the others came from as far away as New York & Minnesota." He refrained from mentioning that the clear majority were from South Florida, even if they don't live in the city limits. Meanwhile, former National Security Advisor Susan Rice pointed her finger at #Resistance liberals' favorite outside agitator, speculating on CNN that all this "is right out of the Russian playbook."

That sure would be tidy, wouldn't it? But riots are never tidy. That's why they call them riots.