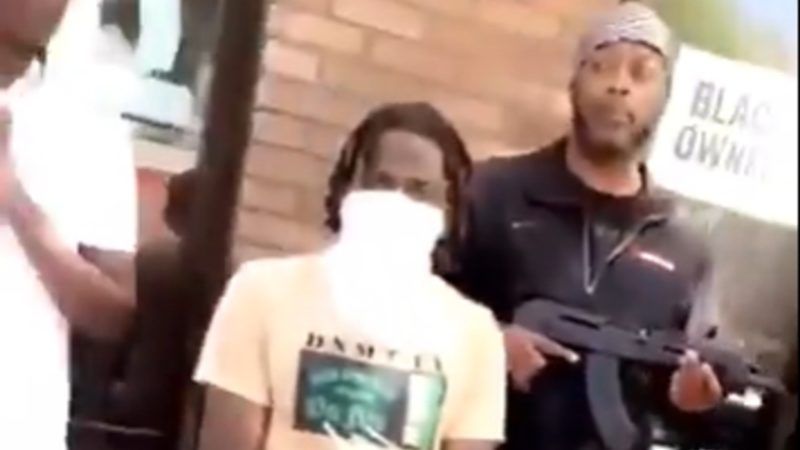 In the wake of the police-involved death of George Floyd in Minneapolis, armed black activists have stepped up as the city endures protests, riots, and looting.

A video of a group of armed black residents in St. Paul went viral on Thursday. The video shows armed black men standing in front of a store. The person who is recording says that the business they're protecting is black-owned. A black gunman can be seen in the background of another video featuring civilians protecting a store.

A man who calls himself The Official Grand Master Jay (it's unclear whether this is a nickname or just a social media handle) leads a group called the Not Fucking Around Coalition (NFAC), a black group that he says is compromised of "ex military shooters," and he's been using his social media accounts to showcase his group's armed protests in the wake of Floyd's death. NFAC previously gathered in the Georgia neighborhood where Ahmaud Arbery was shot and killed by two white residents while unarmed and out jogging.

In a clip from one of his livestreamed discussions, The Official Grand Master Jay touted the power of armed protests by speaking about an encounter with officers that ended peacefully.

Other armed protesters have recently made headlines for defending their beliefs. After protesters advocating for the reopening of the economy following COVID-19 lockdowns swarmed the Michigan Capitol, a group of concerned black residents organized the armed escort of black state legislator Sarah Anthony in response. Several in the group carried rifles as they walked her safely to the building.

The arrival of militia members and armed private citizens is to be expected in cities where there is intense fallout from fatal use-of-force incidents. Black activists, some inspired by the likes of Malcolm X and the Black Panthers, are using their guns to remind the public that they, too, have a voice.