In some states, the total is as high as 65 percent. It's a stunning statistic that might force policy makers to reconsider their approach to fighting the coronavirus.

Almost exactly three months ago, the first major outbreak of COVID-19 within the United States occurred at a nursing home in Washington state.

Now, after more than 100,000 Americans have died from the disease that has swept across the country and wrecked wide swaths of the economy, it appears that nursing homes are still the most vulnerable places—by a wide margin.

In at least 22 states, more than half the reported COVID-19 fatalities have occurred in nursing homes and other long-term care facilities, according to state-reported data aggregated by researchers at the Foundation for Research on Equal Opportunity (FREOPP), a free market think tank focused on low-income Americans. Across the 39 states that report the location of COVID-19 deaths, 42 percent have occurred in nursing and residential care facilities, a tally that includes facilities for the care of people with disabilities as well as hospice programs.

For comparison, the Centers for Disease Control and Prevention (CDC) estimates that 2.1 million Americans live in nursing homes or long-term care facilities. That's 0.6 percent of the total population.

And the 42 percent figure may even be undercounting nursing home deaths. As Avik Roy, president of FREOPP, explained in an article for Forbes, some states (including New York, which has experienced a large COVID-19 outbreak) "exclude from their nursing home death tallies those who die in a hospital, even if they were originally infected in an assisted living facility."

That's probably why New York's official nursing home death rate is only 13.8 percent, the lowest count of any state that reports the location of infections and deaths. But outside of New York, more than half of all COVID-19 fatalities nationally were residents of nursing homes and other long-term care facilities. 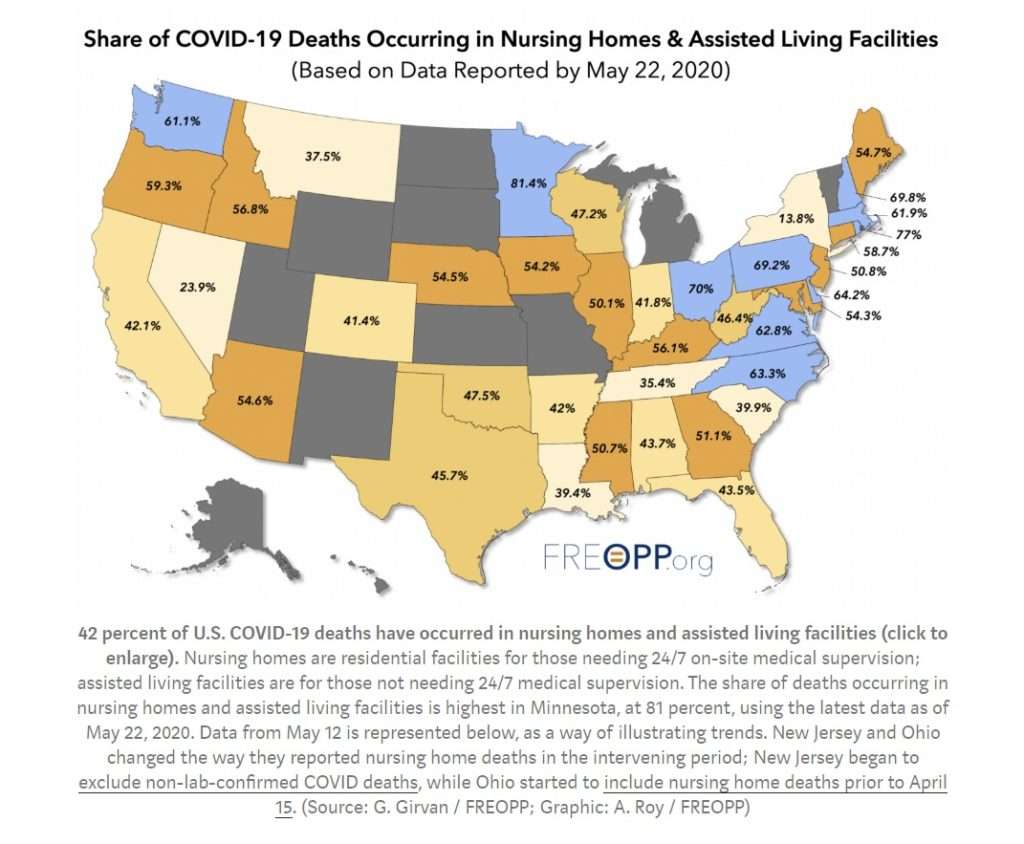 These residents have been most vulnerable to COVID-19 in other countries, too. Researchers at the International Long Term Care Policy Network, a global organization that shares research and best practices, found that 40.8 percent of reported COVID-19 fatalities across 18 countries took place in nursing homes.

There are probably several reasons why nursing homes have been particularly hard hit by the pandemic. Most residents of nursing homes are elderly or infirm, with many people suffering from long-term ailments or particularly vulnerable due to weakened immune systems. People live close together, sharing living quarters and common spaces like cafeterias. And there is good evidence that the coronavirus spreads more efficiently indoors.

But some states made policy choices in the early days of the COVID-19 pandemic that may have made nursing homes even more vulnerable to the disease. Governors in some states—including Michigan, New York, and Pennsylvania—prevented nursing homes from turning away patients with active COVID-19 infections. Those policies likely helped spread the disease to some of the most vulnerable populations.

Other states, like Florida, have locked down nursing homes and prioritized shipments of personal protective equipment (PPE) to those facilities, putting them on the same level as hospitals. That may help explain why Florida has had fewer overall deaths than other large states—despite 40 percent of those deaths occurring in nursing homes—and it's something other states should copy.

As states emerge from total lockdowns and begin to restart their economies, policies must adapt to reflect the growing body of evidence about COVID-19 vulnerabilities. We now have a better idea about the overall fatality rate of the disease—about 0.3 percent, lower than was feared at earlier stages in the crisis. We also know more about how the disease spreads and which populations need the most protection.

That doesn't, of course, mean that anyone not living in a nursing home is safe from the virus, it does not soften the blow of the deaths that have already occurred, nor will it make deaths of friends and loved ones any easier. But the concentration of deaths in nursing homes should give younger, healthier Americans more confidence about returning to some semblance of normal life and should inform public policy decisions about how to slow the disease's spread.

"The fact that nearly half of all COVID-19 deaths have occurred in long-term care facilities means that the 99.4 percent of the country that doesn't live in those places is roughly half as likely to die of the disease," writes Roy. That means schools and many businesses can be reopened without the risk of huge spikes in hospitalizations or deaths, according to him, and that states must learn from their earlier missteps in handling nursing home outbreaks. These data have implications for policy making as states look to safely reopen their economies.

The coronavirus is going to be a long-term problem, but the next step in fighting it is for governments to lift economically ruinous lockdowns when possible and focus on saving the lives most at risk.