Libertarians will decide this weekend if a message that "nothing matters more...than living in a free society" will resonate in 2020. 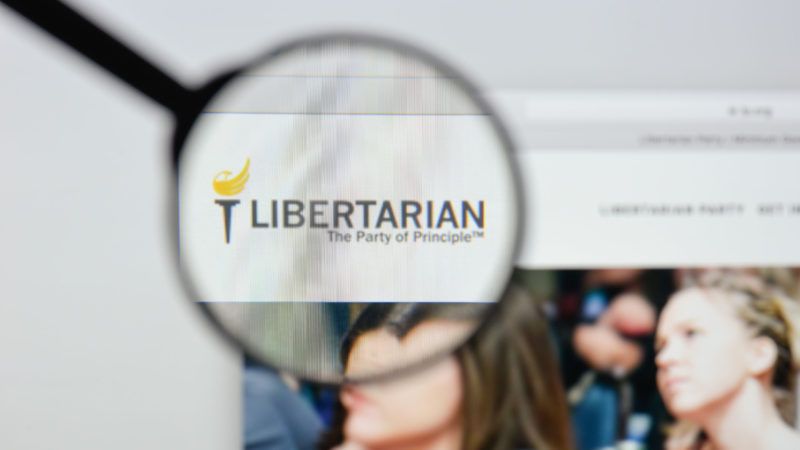 Five leading candidates for the Libertarian Party's presidential nomination debated last night, in an event moderated by John Stossel. The voting will begin tomorrow via an online meeting of party delegates.

Two candidates, Judge James Gray and Jo Jorgensen, have been the party's vice presidential nominees in the past (Gray in 2012, Jorgensen in 1996). One, John Monds, earned more than 31 percent of the vote in a 2014 race for the Public Service Commission in Georgia. Another, Jacob Hornberger, has run a libertarian educational institition called the Future of Freedom Foundation since 1989. And the fifth, Vermin Supreme, is a political parodist, famous for wearing a boot on his head, who insists that this time he's a serious choice.

Hornberger believes Libertarians give up their valuable moral high ground if they give an inch to any variety of statism, including Social Security and Medicaid. Jorgensen stressed the limits in our constitutional system of how much libertarian change a president alone could unilaterally deliver. She said she'd be quick to veto excessive spending and to pardon victimless criminals, but she thinks those who have paid into Social Security deserve to get that money back—so she's against instantly killing the system entirely, though she said she would allow people to stop paying into it from day one.

Judge Gray, for his part, insists that taking an all-or-nothing approach to shrinking government will ensure the party keeps getting nothing from America's voters. He consistently pushed viewers to check out the specific policy plans at his campaign website.

Supreme stressed that his humor—which he did not consistently bring to bear, though he was the only one to (apparently) smoke marijuana on camera when the subject of the drug war came up—will be a media magnet that amplifies his serious message and attracts millions of young voters. (Supreme argued that he has a chance of winning up to 25 percent of the youth vote.) Monds said his status as the great-grandchildren of slaves could help Americans see the degree to which government is unjustly interfering in their lives, and he promised to bring home not just the troops but the drones.

On COVID-19, Hornberger insisted that "the dynamics of the free market" would produce all the tests, masks, and ventilators the crisis demands, and that leaving any remnant of government's current interferences in the health care market ensured failure. Jorgensen pointed specifically to unnecessarily stringent FDA regulations as a barrier to solving the COVID-19 crisis. Gray said the government's role in the epidemic should be to serve as an honest broker of information and advice, not to force businesses to close en masse.

They all more or less agreed that an America that interfered less abroad would be less likely to need a sprawling military. Even the most vocally radical candidate, Hornberger, agreed that a military of some sort, just for protection against actual invasion, would be appropriate. But he railed against the military-industrial complex and the national security state, and he called the CIA the most evil institution in American history.

Hornberger insisted he would if he could press a button to end every aspect of the welfare state immediately, with a belief that a richer, freer America would rise up in voluntary charity to prevent disaster. Jorgensen agreed in principle, and used a story about a United Way scandal in the 1990s to buttress her point that Americans are capable of being responsibly charitable, but she seemed to think an instant sudden end to all welfare would not be prudent. Gray also stressed that with welfare, like taxes, a gradual series of steps down from government action toward private responsibility would be most prudent and the best sell to the voter, a philosophy of moving the ball of liberty down the field rather than a Hail Mary pass likely to fail.

Monds argued that government tends to hurt rather than help Americans' welfare, blaming the Federal Reserve's "private banking cartel" for destroying the value of the dollar and minimum wage laws for locking people out of jobs. Supreme had a similar message about things government needs to stop doing to leave more money and choice in Americans' hands, from property and income taxes to the minimum wage.

The most concrete thoughts about climate change came from Gray, who believes that information and free choice internationally might persuade, say, China and India to stop burning coal if people boycotted buying from them until they stopped. Jorgensen thinks a system of restitution for environmental damage plus insurance would likely mitigate future oil spills more than regulation does.

While Monds stressed his personal opposition to abortion, no candidate at the debate wanted the federal government to ban it. Everyone seemed to agree with the basic libertarian platform of open immigration, though Hornberger was especially firm on the glories of free trade and free movement of people. The IRS was in most candidates' sights for elimination.

Supreme didn't try to be overly wacky. Many of his answers included no jokes at all. Other times he started with a quip—such as "I'm a big fan of mind control as opposed to gun control"—before delivering a serious message.

Stossel mostly tried to serve as the devil's-advocate voice of an imagined normal voter—asking, for example, whether Americans are happy to have government help and government rules for pandemic control. "I say liberty above all else," Hornberger replied. "Nothing matters more to me than living in a free society."

The vote tomorrow will show exactly how far Libertarian delegates think that message can resonate in 2020.