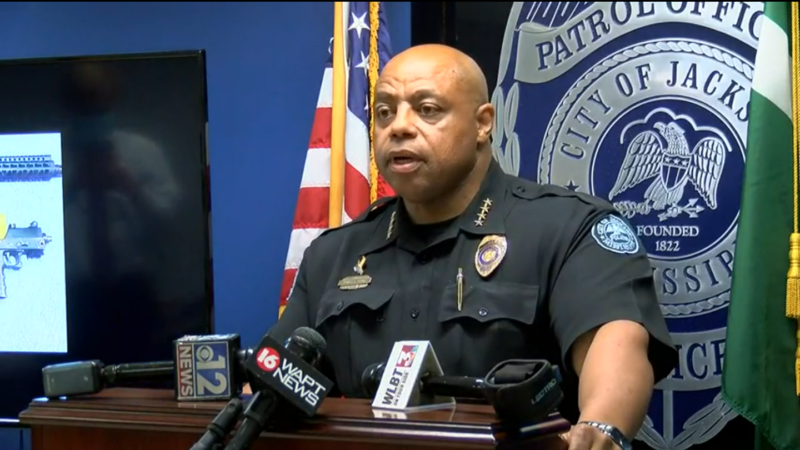 Cops warm to using the coronavirus as an excuse for aggressive behavior. At the start of pandemic-related orders to stay at home and shut down businesses, cops across the country kept insisting that we were all in this together and they were only out to educate. A couple of months in, that attitude has all but disappeared in many places. Even as state and local authorities continue to ease lockdown rules, police have been ramping up aggressive enforcement of the remaining restrictions, often with devastating results.

One of the worst recent examples comes from Jackson, Mississippi. At a press conference yesterday, police announced 146 arrests had been made as part of "Operation Safe Street," an initiative allegedly aimed at social-distancing scofflaws.

But look closer and you'll see that this was simply an excuse for police to pad their pockets by enforcing rules against the usual victimless crimes (things like marijuana possession or owning a weapon without paperwork from the right state).

Jackson police netted themselves $20,000 in seized cash while confiscating 500 pounds of marijuana and 60 firearms, according to Sam Brown, the department's public information officer. The majority of those arrested—111 people—were charged with misdemeanors.

Police didn't say how many of those people were crammed into unsanitary jails and then released back into the community in the name of stopping the spread of disease (not to mention how much unnecessary contact with potentially infected individuals this meant for law enforcement officers or how many community members cops may have spread germs to in the process of cracking down on these laws).

In New York City, authorities continued a crusade against Hasidic Jew communities for shunning certain shutdown orders. Yesterday, the New York City Police Department (NYPD) shut down a religious school in Bedford-Stuyvesant and sent approximately 60 children they found there home. The school's administrator said no formal classes had been taking place, however, and policies were in place to protect students studying there independently.

"He said that individual students were studying together on their own accord, and with masks and extreme social distancing in place," Avrohom Weinstock, associate director of education at the Agudath Israel of America, told The New York Times. "I can't comment on the facts as we were not present, but felt it was important to convey another side to this story."

Meanwhile, in Illinois, the state can now "cite nonessential businesses with a misdemeanor for opening up to customers in violation of [Gov. J.B. Pritzker's] executive orders dealing with the COVID-19 pandemic," The Chicago Tribune reports. More:

Among the businesses the new rule targets are restaurants, bars, gyms and fitness centers, salons and barbershops, which have been ordered closed to serving customers on-site since March.

Pritzker has repeatedly said he would largely rely on local jurisdictions to enforce the statewide stay-at-home order that took effect March 21, and leave it to people to police themselves. At his daily briefing on April 23, the governor said he wasn't "encouraging police officers to stop people and arrest them, or take drastic action."

But last week, he threatened to hold back federal dollars from communities that buck his order, and he said businesses that flout the restrictions would face enforcement measures by the state Department of Financial and Professional Regulation and licensing bodies.

As more and more people rebel against prolonged and extensive lockdown orders, police are going to have to start arresting a lot more people—and putting themselves and their communities in a lot more danger—or take a page from the Texas playbook. As Reason's Eric Boehm wrote here yesterday, "enforcement should be reserved for where it can actually work."

• In France, the high court has ordered the government "to stop using camera drones to check if Paris residents are complying with deconfinement rules, condemning the practice as 'illegal' and 'an attack on private life,'" reports The Connexion.

• In Queens, the newly formed Human Trafficking Bureau "will combat sex and labor trafficking by aggressively prosecuting" people who are engaged in neither.

• "In the wake of the coronavirus epidemic, the content-sharing platform" OnlyFans has "exploded in popularity, seeing a 75 percent increase in sign-ups in recent weeks and garnering 170,000 new users per day."

• President Donald Trump told America yesterday that he has been taking the anti-malarial drug hydroxychloroquine to ward off COVID-19, despite a lack of strong evidence that it helps fight against the novel coronavirus when it does exist, no evidence whatsoever that it helps prevent COVID-19, and an indisputable track record of it causing dangerous side effects.

Infectious disease doctor Tim Lahey says the president is taking hydroxychloroquine because he fell victim to a "common misconception" that a drug in testing can't hurt.@NoelKing: Is the president putting himself in danger?
Lahey: Yes.@MorningEdition @NPR

Your periodic reminder that any asshole can file a lawsuit https://t.co/rRHIh2l7xs