"You can't exactly eat with a mask on, and I have a small space where people would be in close proximity to each other." 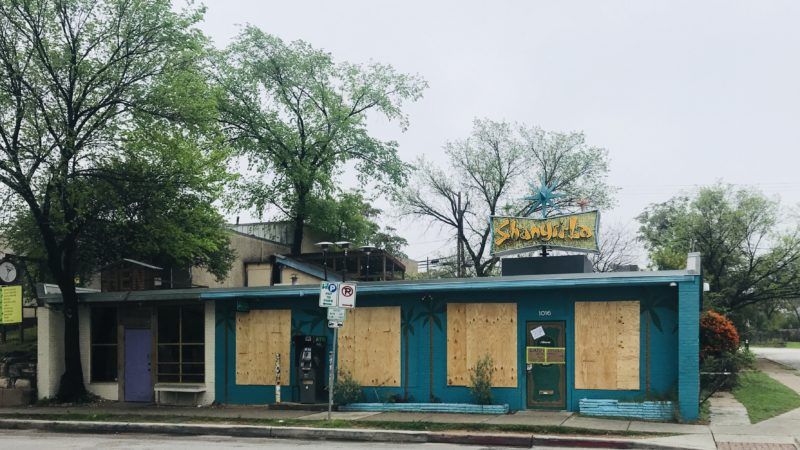 Starting today, many of Texas's restaurants, movie theaters, malls, and retail locations will be partially open for business, operating at 25 percent capacity, per orders that Gov. Greg Abbott released last Monday. Establishments in counties that have had less than five coronavirus cases as of April 30 may jump straight to operating at 50 percent capacity.

If Texas does not see a vast spike in new COVID-19 cases by May 18, Abbott says, phase two of the reopening can commence. That will involve bumping allowed capacity up to 50 percent in all counties, plus allowing barbershops, hair salons, gyms, and bars to open as well.

The aim is to balance the interests of businesses and workers who have been hit hard by government-mandated lockdowns, who have lost weeks of revenue through no fault of their own, with the public health concerns that led the authorities to shut down much of the economy. Texas has had a less severe outbreak so far than many other states—28,000 infections, with just under 800 deaths. The state's hospitals, even in such cities as Austin and Houston, haven't had to deal with overflowing ICUs like the ones in New Orleans and New York.

But many restaurant owners in Austin, where I live, say that operating at 25 percent isn't feasible for their business models, doesn't seem prudent at this time, and would hardly provide much economic relief anyway.

"From a business perspective, it's negligible at 25 percent. But even at 75 percent, I just don't know how I would manage safe social distancing for everyone and keep my customers and employees safe," says Jay Lee, owner of a pan-Asian restaurant called Koriente. "You can't exactly eat with a mask on, and I have a small space where people would be in close proximity to each other." Lee will keep Koriente closed for now.

"Opening at 25 percent is not viable for our 40-seat restaurant, as we would be adding back the costs we have cut and not serving nearly as many people as we are with to-go service," says Sarah Heard, owner of Foreign and Domestic. The restaurant, which sources from local farms as much as possible, shifted to offering takeout service and groceries (which they intend to maintain for now), plus outdoor seating where you can eat on the premises if you abide by contactless payment and counter pickup. Phase one doesn't change much for them.

For larger restaurants, reopening at this capacity is possible. Mighty Fine and Rudy's Bar-B-Q both have foldable chairs and tables in their locations, notes brand director Allyson Young, so it plans to reconfigure its indoor dining space to accommodate social distancing. It has maintained a full staff during the Texas shutdown, having shifted to takeout service—indeed, it's even been hiring.

Salt Lick BBQ owner Scott Roberts says the restaurant, located in the nearby town of Dripping Springs, will do a modified version of phase one, keeping its dining room closed but shifting toward outdoor seating. His plan: "Get the barbecue, find a shade tree, and enjoy." The restaurant will reassess its options when phase two starts.

Smaller restaurant owners are less optimistic. Paola Guerrero-Smith, co-owner of Buenos Aires Café, says: "Last week we re-organized our floor layout [at the East 6th St. location] just to see what it would look like to have a less crowded seating arrangement per other cities protocols. And it was an eye opener for sure. The restaurant as we once knew it is no longer a reasonable business model anymore. At least not for a while."

"Nothing changed since March 17," adds Guerrero-Smith. "The cases have not dropped and we are still at risk. Our restaurant is already small, and to operate at 25 percent capacity means 20 guests at any given time. Twenty-five percent or less labor is 7 of the 30 employees, 25 percent or less of the food and beverage offerings we can offer. But it doesn't mean 25 percent less of our financial responsibilities. Payments are being deferred but not forgiven. And when our staff loses unemployment because now we have to [be] 'open for business' then we are going to have even further serious problems."

Guerrero-Smith's concerns about unemployment benefits are reasonable. Day cares have been instructed to only take the children of "essential" workers, but any workers who choose not to return once their employers reopen will no longer be eligible for unemployment benefits. The Texas Tribune reports that the Texas Workforce Commission said earlier this week that it is "considering case-by-case waivers" that would alter the rules, but nothing has been finalized.

Not only are many smaller restaurant owners unable or unwilling to open at 25 percent, but there are a host of other problems that come with the state's confusing, contradictory patchwork of rules, some of which have not been suspended in advance.

And of course, demand might not bounce back in phase one, or even phase two. People have lost a lot of disposable income and gained a lot of caution. Will the joy of going out to dinner—the busy hum of a full restaurant, the knowledge you won't have to do any dishes later, the comfort of being taken care of by an especially attentive waiter, the ability to revel in dishes you'd struggle to make in your own kitchen—be easily summoned again?

Abbott's critics argue that he made a rash decision to reopen while Texas's testing capacity remains low. Texas Monthly argues that the governor has cherry-picked data and time frames to convey that Texas's cases are dwindling. But that matters less if business owners are willing to pick up the slack, making independent decisions while considering their own risk tolerance and financial realities.

The issue is the actual on-the-ground circumstances of those who are affected by this pandemic and the subsequent closures. Smaller restaurants will be hit hardest by this, and reopening at such reduced capacities unfortunately delivers far less economic relief to them than anticipated.