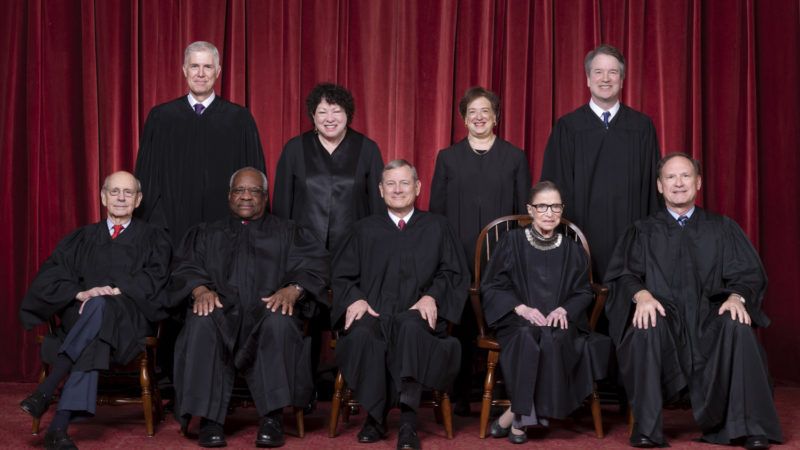 The case that the Supreme Court is scheduled to hear on Monday morning, a trademark dispute involving the travel service Booking.com, is probably of little interest to the general public. But the manner in which the justices will hear oral arguments—via a teleconference with a live audio feed for anyone who wants to listen—is unprecedented and could represent a significant step toward the kind of transparency the Court has long resisted.

While the official justification for the unusual arrangement is "public health guidance in response to COVID-19," the fact that the Court decided to allow online streaming of the oral arguments in 10 sets of cases it will hear from May 4 to May 13 may signal a new openness. As Gabe Roth of the advocacy group Fix the Court notes, "Supreme Court arguments [are] going live," and "all it took was a global pandemic."

The Court publishes transcripts of oral arguments on the day they are held and makes audio recordings available at the end of the week. But because it has always rejected requests for video or live audio coverage, anyone who wanted to watch or hear the proceedings as they happened was out of luck unless he could secure a coveted spot in the Court's public gallery, which accommodates about 250 people.

That arbitrary restriction has created scenes surpassing the queues for openings of blockbuster movies or sales of must-have toys. Before the Court heard arguments in the 2012 Obamacare case, Drexel University law professor Lisa McElroy notes, would-be spectators "slept outside (in the rain) for at least three nights (some more), all to see history in the making."

At a time when Americans can watch gavel-to-gavel coverage of Congress on C-SPAN and cannot turn on the news or go online without seeing the president in action, the camera shyness of the federal government's third branch is hard to understand and even harder to justify. Over the years, various justices have offered various reasons for banning cameras from their courtroom, none of them persuasive.

Would cameras inhibit members of the Court, as former Justice Anthony Kennedy worried? Since everything the justices say during oral arguments is already heard by people in the gallery and in any case becomes public eventually, that concern is hard to take seriously.

Would cameras encourage lawyers to grandstand? Since they have strong incentives to avoid antagonizing the justices and focus on substantive points in the limited time they have, that seems unlikely.

Would cameras deprive justices of their "anonymity," as Justice Clarence Thomas has argued? Since the justices go through a highly visible confirmation process, sit for official photographs, and do not shy away from public appearances, that ship has already sailed.

Would cameras "raise additional security concerns," as Thomas also claimed? That concern likewise seems overblown, since the justices are protected by their own police force, anyone with an interest already recognizes their faces, and violence against public officials is rare.

Would video of oral arguments encourage the news media to feature misleading excerpts, shorn of context, as the late Justice Antonin Scalia warned? That hazard already exists, since we have transcripts and delayed audio recordings, not to mention reporters in the courtroom.

In Canada and the U.K., where the supreme courts have long allowed cameras, citizens see "able public servants with a complete mastery of difficult materials grappling seriously with matters of surpassing consequence," observes Adam Liptak, who covers the U.S. Supreme Court for The New York Times. Such visibility, he suggests, "probably inspires confidence" and "certainly dispels ignorance."

The issue is "very simple," as C-SPAN founder Brian Lamb, who for decades unsuccessfully urged the Court to accept cameras, told my Reason colleague Nick Gillespie in 2010. "It's a government institution that's funded by the American taxpayers," Lamb said. "The oral arguments are a public discussion [that] completes the picture that the public could have of the government they pay money to."