The video was appalling, but it does not constitute a safety threat. 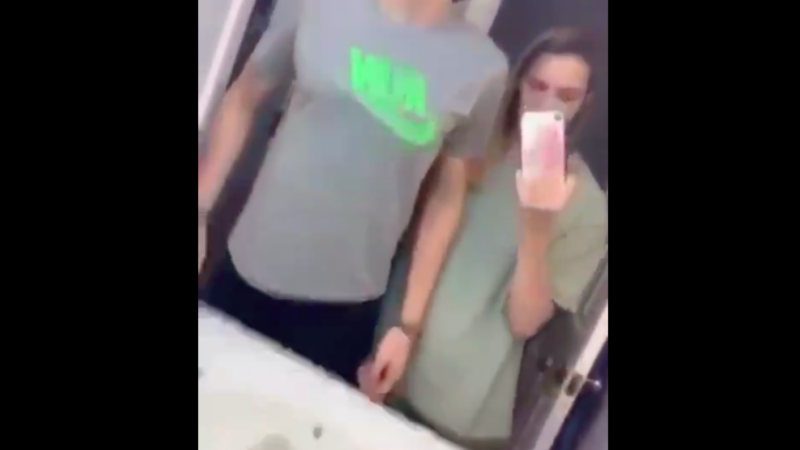 "They are no longer students at Carrollton High School," said District Superintendent Mark Albertus in a statement.

The video is highly offensive, and the two students responsible for it—a teenage boy and girl—exercised exceedingly poor judgment. But in punishing them so severely for conduct that took place entirely outside of school, Carrollton education officials have exercised poor judgment as well.

In the video, the two students place a piece of paper that reads "niggers" in the bathroom sink and proceed to fill it with cups of water representing "don't have a dad," "rob people," and other racist tropes. The pair made no effort to hide their identities, and their names are publicly associated with the video, which quickly went viral. TikTok eventually deleted it.

According to Insider, the girl offered an extremely weak apology "to any blacks that got offended," placed the blame on her boyfriend, and asked her critics to stop trying to get her "cancelled." No doubt, the video will be associated with their names for a long time, severely harming their college and job prospects, perhaps deservedly.

In any case, the school's handling of the incident is troubling. Indeed, school officials probably violated the First Amendment, though court decisions have limited the free speech rights of K-12 students so egregiously that the matter is not completely clear.

Keep in mind that the video was filmed at a home—not on school property or during school hours. It didn't name or threaten any specific individuals associated with the school. And it did not advocate or involve illegal behavior. Racists statements, loathsome though they are, qualify as protected speech in most cases.

These are all important considerations, because courts have generally limited students' free speech rights only when necessary to prevent substantial interference with a school's educational functioning. The landmark 1969 Supreme Court decision in Tinker v. Des Moines held that action taken by schools to punish speech must be "caused by something more than a mere desire to avoid the discomfort and unpleasantness that always accompany an unpopular viewpoint."

Subsequent rulings have been less favorable to K-12 students' free speech rights. In the well-known "bong hits for Jesus" case, Frederick v. Morse (2007), the Supreme Court upheld a school's decision to censor students whose speech was construed as promoting illegal drug use at a school function. A more recent decision from the U.S. Court of Appeals for the Fifth Circuit, Bell v. Itawamba County Board (2012), sided against a student whose offensive speech was directed at a school employee.

In a statement, Carrollton officials acknowledged that the racist speech took place outside of school but nevertheless asserted that they had the authority to punish the students for it.

CHS Principal David Brooks, who began investigating the incident Thursday night after the release of the video, said even if the offending incident was recorded after-school hours, it doesn't alleviate the students' responsibility to uphold a high standard of behavior.

"It is our priority to keep our schools safe, and there is no doubt this incident has caused significant tension at Carrollton High School, across the district, state and nation – even the world," he said.

It seems like a stretch to argue that the racist video was a safety matter—again, it did not threaten violence or name a specific individual. It may have caused tension, but that is a thin rationale for giving education officials virtually unlimited power to punish any action that upsets someone at school.

I don't know if a civil liberties group would have any interest in taking this case given how deeply unsympathetic its subjects are, but it strikes me as worth it, if only for the sake of defending even minimal free speech rights for school-aged young people.