In two separate op-eds yesterday, the senators pitch central planning as the best response to the coronavirus pandemic. 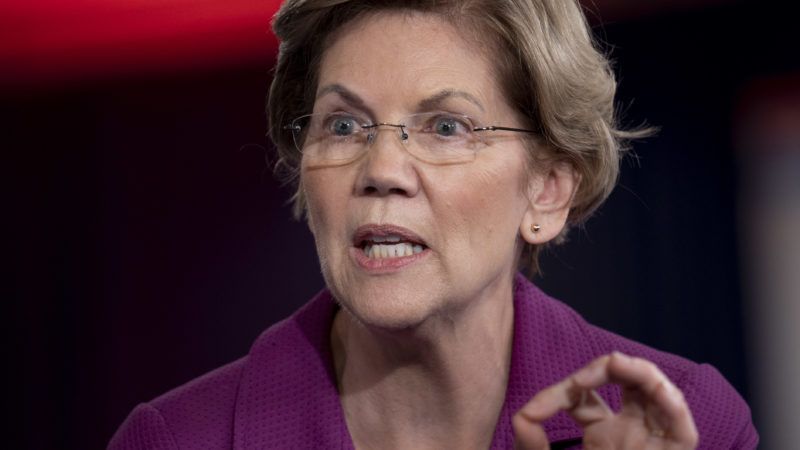 The central planners of both parties are recommending we do whatever is necessary to tackle the nation's shortage of medical devices and personal protective equipment (PPE), save for removing government restrictions on the manufacture of those goods.

Yesterday, Sen. Elizabeth Warren (D–Mass.) took to The New York Times and Sen. Josh Hawley (R–Mo.) to The Washington Post to promote their respective visions for responding to the COVID-19 pandemic and the economic recession it's causing. Both senators have big regulation-centric ideas for addressing the dire shortage of PPE and other medical products.

"We must act now to have the government manufacture or contract for the manufacture of critical supplies when markets fail to do so," Warren wrote in the Times, listing PPE, pharmaceuticals, and vaccines as products the government should consider producing itself.

"Lifesaving medical products needed to fight this virus are in short supply," Hawley wrote in the Post. "We must also move decisively to secure our critical supply chains and bring production back to this country. The present crisis has revealed just how vital domestic production is to our national life."

The Missouri senator proposes creating local content laws for essential industries that would require them to source their materials from domestic sources, and which would be phased in after the current crisis.

These proposals are very much in line with the senators' pre-coronavirus policy proposals. Warren had already put forward a bill in December 2019 that would give the U.S. Department of Health and Human Services the power to manufacture generic drugs. Hawley has been an outspoken China hawk and free trade skeptic for his entire time in the Senate.

By turning to protectionist industrial policies and direct government ownership of industry, the two lawmakers ignore the ways that existing government regulations have contributed to these shortages.

As Jacob Sullum noted yesterday, the Center for Disease Control and Prevention (CDC) monopolized testing for the virus early in the year, and then shipped out defective tests to labs, likely blowing the country's best shot of containing COVID-19 early on.

In late March, a number of private companies were ready to start selling hundreds of thousands of tests directly to consumers, believing their products were covered by an Emergency Use Authorization from the Food and Drug Administration (FDA) that allowed certified labs to start performing tests. But the FDA quickly shut down those efforts, instructing companies to stop selling at-home tests, and issued a warning to the public about "unauthorized" and "fraudulent" COVID-19 test kits.

Interestingly, the FDA is allowing some of these same at-home tests to be used by hospitals and healthcare provides, which Ron Bailey noted "indicates that these tests work and are in no way fraudulent."

The same thing can be said for the shortage of N95 masks that would help protect healthcare workers and everyday citizens alike from catching COVID-19. The CDC's National Institute for Occupational Safety and Health (NIOSH) requires that new N95 manufacturers have their product's tested at NIOSH's lab, and that new manufacturing facilities undergo inspections from the agency. That process can delay masks going to the people who want and need them by up to 90 days, leaving doctors to go to work with bandanas tied around their faces.

Those kinds of regulations should be particularly concerning for someone like Hawley who wants to see new domestic manufacturing facilities set up, yet he made no mention of such obstacles in his op-ed.

In a similar fashion, Warren has continually demanded the Trump administration be more aggressive in using its authority under the Defense Production Act (DPA) to spur the production of COVID-19 tests, PPE, and ventilators. She's also introduced legislation to that effect. For the most part, Warren is demanding that Trump use the DPA to spend more money and boss companies around.

As R Street Research Fellow Caleb Watney and  Alec Stapp of the Progressive Policy Institute argue in a Politico op-ed today, the DPA also gives the president broad authority to waive anti-trust and liability regulations. Doing so, they say, would allow more cooperation among firms trying to address the current shortages. That neither senator so much as mentions these free market reforms suggests that they are interested only in policies that conform to their pre-COVID-19 beliefs.

It's not only frustrating that D.C.'s "wonkiest" senators refuse to update their priors in response to a crisis that is crippling the global economy, it's actually dangerous when one considers how much damage has already been inflicted by the federal government's already centralized response to COVID-19.