How Long Can an All-Food Economy Stay Stable Under Shadow of COVID-19?

Stores seem full now, but both illness and legal barriers could interfere with the economy of food production and distribution. 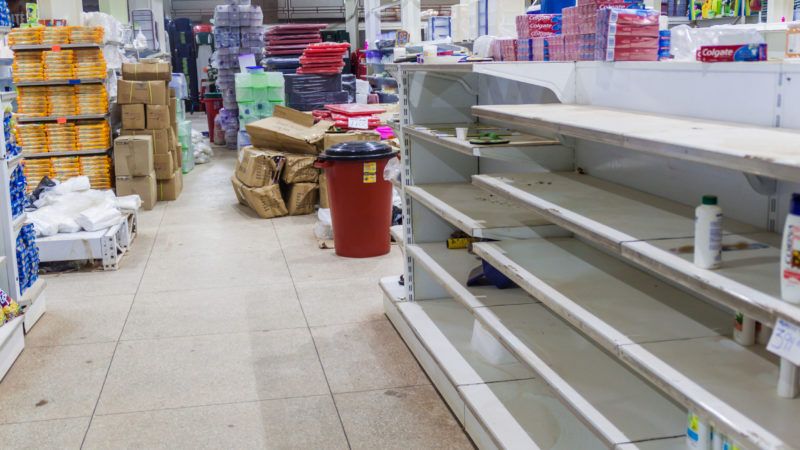 How long can an economy that is legally about pretty much nothing but food production, distribution, and sales survive in this COVID-19 haunted world?

The United Nation's Food and Agriculture Organization (FAO) isn't feeling good about the near future, to judge from the statements posted on its website. "As of now, disruptions are minimal as food supply has been adequate and markets have been stable so far," it says. But it detects threats looming from both "logistics bottlenecks (not being able to move food from point A to point B), and likely…less food of high-value commodities (i.e. fruits and vegetables) being produced."

Over the next two months, the FAO anticipates "disruptions in the food supply chains," thanks to "restrictions of movement, as well as basic aversion behaviour by workers…. Shortage of fertilizers, veterinary medicines and other input could affect agricultural production. Closures of restaurants and less frequent grocery shopping [will likely] diminish demand for fresh produce and fisheries products, affecting producers and suppliers."

The agency is particularly concerned with "countries that rely heavily on food imports, such as Small Islands Developing States, and countries that depend on primary exports like oil. Vulnerable groups also include small-scale farmers, pastoralists, and fishers who might be hindered from working their land, caring for their livestock, or fishing. They will also face challenges accessing markets to sell their products or buy essential inputs, or struggle due to higher food prices and limited purchasing power." The FAO also worries what will happen to the developing-world children—up to 85 million of them—who depend on school-supplied meals.

During the 2014–16 Ebola ourbreak in Sierra Leone, the group reports, quarantines "led to a spike in hunger and malnutrition. The suffering worsened as restrictions on movement led both to labour shortages at harvest time even as other farmers were unable to bring their produce to market."

The FAO says is already sees "challenges in terms of the logistics involving the movement of food…and the pandemic's impact on livestock sector due to reduced access to animal feed and slaughterhouses' diminished capacity (due to logistical constraints and labour shortages) similar to what happened in China." Transport route blockages from virus fears could especially harm the fresh food market, where products are highly perishable. The FAO thus anticipates price spikes in the meat and fish markets.

Some countries are already practicing isolated bits of food protectionism. Malaysia closed some palm oil planatations because of a virus outbreak. Reuters reports that Kazakhstan has "suspended exports of wheat flour, buckwheat, sugar, sunflower oil, and some vegetables until at least April 15 to ensure their steady supply during the coronavirus emergency." Russia has stopped exporting processed grains, and Vietnam is stockpiling rice.

Here in America, the U.S. Department of Agriculture continues to order the destruction of tanker trucks of milk because processing dairies are full—a product of demand spiking and then, with the disappearance of school lunches, crashing. The U.S. also faces COVID-19-inspired immigration restrictions that will likely harm our food production.

The United Farm Workers union is warning that American food producers aren't doing enough to prepare for the pandemic's potential impact on the industry's workers. "More than 400 commodities grown in California represent 13% of US agricultural value, totaling some $50 billion in business each year," Quartz reports, and "just two California farms supply about 85% of US carrots. If the virus were to disrupt production at the largest of the state's 77,500 farms, it would be felt globally" as "the state's department of food and agriculture put its combined agricultural export value at $20.5 billion."

Short-term stockpiling of things such as yeast can create apparent shortages that are really just supply-chain blockages. But as Ananth Iyer, a supply chain specialist with Purdue University, tells Quartz, labor-dependent items such as avocados, grapes, and tomatoes might face quicker actual shortages if agriculture workers start getting sick.

If U.S. farm worker safety is the world's worry, then the world's production and supply chain is the U.S.'s worry. As the food economist Shub Debgupta argued in The New York Times this week, "The United States relies on foreign suppliers for almost 20 percent of its food, including 80 percent of its seafood, with almost half of that coming from Asia….About half of our imported dairy products come from Europe, also hit hard by the virus. Almost 25 percent of America's cheese comes from Italy…the nation with the world's highest death toll from Covid-19."

"Significant parts of the food supply could be jeopardized should food protectionism accelerate," Debgupta worries. Among other things, he recommends that "state and federal authorities…provide flexibility while ensuring food safety and minimizing waste."

In short: We're entering unprecedented territory in the world of food production, processing, and distribution. But as always, the more interconnected our supply and labor chains remain—and the less governments or viruses keep them from functioning—the better fed we are likely to be.