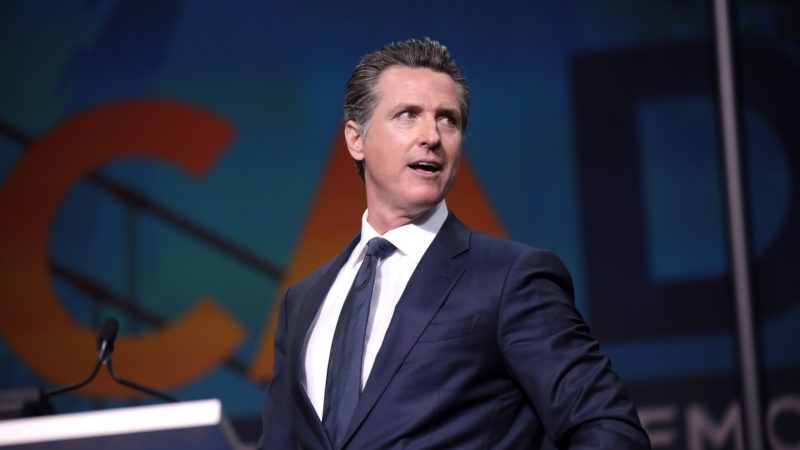 The great American jurist St. George Tucker, writing at the beginning of the 19th century, called the right to armed self-defense "the true palladium of liberty" and "the first law of nature." But California Gov. Gavin Newsom thinks that right, guaranteed by the Second Amendment, is optional.

After Newsom ordered "nonessential" businesses to close in response to the COVID-19 epidemic, he let local sheriffs decide whether that category included gun dealers. Newsom's decision, which allowed Los Angeles County Sheriff Alex Villanueva to unilaterally ban the sale of firearms and ammunition, illustrates how readily politicians ignore constitutional rights in the very circumstances where they matter most.

Villanueva's ban, which several gun rights groups challenged in a federal lawsuit last Friday, was inconsistent with recent guidance from the Department of Homeland Security as well as the Second Amendment. In an advisory published on Saturday, the department added firearm retailers to its definition of the "essential critical infrastructure workforce," which Newsom explicitly exempted from his order.

On Monday, Villanueva, who describes himself as "a supporter of the Second Amendment" but nevertheless suggests that keeping guns for self-protection is irresponsible, rescinded his ban, citing the new federal guidelines. New Jersey Gov. Phil Murphy, whose business closure order initially covered gun stores, likewise recognized them as "essential" after seeing the federal advisory.

Pennsylvania Gov. Tom Wolf also deigned to allow firearm sales, but only after three members of the state Supreme Court said "it is incumbent upon the Governor to make some manner of allowance for our citizens to continue to exercise this constitutional right." Notably, that rebuke came in a dissent from a March 22 decision summarily denying a challenge to Wolf's violation of the Second Amendment.

The reversals by Murphy and Wolf, who are now allowing firearm sales by appointment and in compliance with social distancing rules, show that shutting down gun stores was never necessary to curtail transmission of COVID-19. But their reluctance to respect the Second Amendment and the Pennsylvania Supreme Court's unwillingness to intervene do not bode well for civil liberties at a time when many people seem to think that fighting the pandemic trumps all other concerns.

To "save the nation" from COVID-19, Cornell law professor Michael Dorf argued two weeks ago, Congress should suspend the writ of habeas corpus, an ancient common-law right that allows people detained by the government to demand a justification. Yet the Constitution says "the privilege of the writ of habeas corpus shall not be suspended, unless when in cases of rebellion or invasion the public safety may require it."

Although neither of those circumstances applies, Dorf suggested that the spread of the COVID-19 virus from other countries to the United States could be construed as an invasion. While "no one knows" whether the courts would accept that interpretation, since "Congress has only ever suspended habeas in wartime," Dorf said, "there is reason to think that the courts would dismiss a habeas case following nearly any congressional suspension."

In a recent survey of 3,000 Americans, the University of Chicago's Adam Chilton and three other law professors found bipartisan agreement that "now is the time to violate the Constitution," as they put it. The survey asked whether the respondents would support various constitutionally dubious policy responses to the epidemic.

Sizable majorities of both Democrats and Republicans favored confining people to their homes, detaining sick people in government facilities, banning U.S. citizens from entering the country, government takeovers of businesses, conscription of health care workers, suspension of religious services, and even criminalizing the spread of "misinformation" about the virus. "Even when we explicitly told half of our sample that the policies may violate the Constitution," Chilton et al. report, "the majority supported all eight of them," including the speech restrictions.

"After the threat has subsided," the law professors conclude, "Americans must recognize any constitutional violations for what they were, lest they become the new normal." By then, it may be too late.