Judges would be given additional leeway to order pretrial detentions. 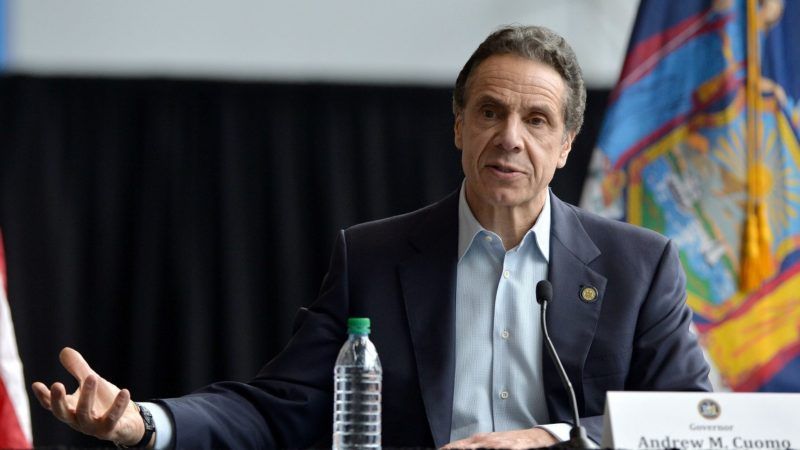 The proposed changes were added Tuesday evening to a last-minute budget deal which has not yet passed. Unsurprisingly, activists who pushed for bail reforms are not happy. New York's law enforcement unions, some of whom initially objected to the extent of the initial changes, also aren't happy with the changes.

New York State hotly contested bail reforms went into effect in January. Judges could no longer demand cash bail for most non-violent misdemeanor crimes. There were exceptions to that rule, and bail could still be ordered for more severe crimes. The goal was to reduce the number of people who are being held behind bars solely because they can't afford the cost of bail.

But New York State also has a distinct issue with its reforms, which is that the state didn't write accompanying rules that allow a judge to use the perceived "dangerousness" of a defendant to order bail or detention. The reform Cuomo has attached to New York's budget will give judges discretion to detain somebody who has been charged with a crime in order to "prevent the principal from committing a crime involving serious injury to another person based on the facts of the instant case."

The other big change inserted into last night's budget bill is the complete elimination of cash bail for all offenses. Judges will have the power to set up a host of demands, but cash bail can't be one of them. Instead, judges can require defendants to report regularly to a pretrial services agency, to temporarily forfeit their passports and guns, and to refrain from contacting others involved in the case. They can also determine that a defendant should not be released and keep them behind bars; those defendants would not be able to use cash bail to secure their release before trial.

This is kind of how New Jersey's bail reforms mostly work. Before New Jersey nearly eliminated bail entirely (it can be used in rare circumstances, but it rarely ever is), judges also lacked the power to detain on the basis of dangerousness. The state required that anybody who had been charged with any crime (except for a capital crime) to be granted a cash bail offer. So, in order to significantly curtail bail, New Jersey changed its rules to allow for pretrial detention for anybody deemed too dangerous to be released.

What makes New Jersey's system different from what New York is considering as part of its budget bill is that New Jersey courts have a robust and well-funded pretrial court that operates on the assumption of release for every defendant who has been charged with a crime. A defendant can be detained, but a prosecutor has to make a case for detention—the judge cannot initiate pretrial detention orders; the defendant is also represented by counsel. After a short presentation, the judge makes a decision to detain a defendant pretrial or release pretrial.

That doesn't appear to be in New York's late-night proposal. While the bill calls for judges to impose the least restrictive conditions necessary to make sure the defendant will return to court and refrain from criminal behavior until then, it also gives judges much more latitude to make the decision.

Defense attorneys and criminal justice supporters are deeply concerned that vesting only judges with that power will result in more people ending up in pretrial detention without the option of bailing themselves out. This morning, representatives from Brooklyn Defender Services, The Bronx Defenders, The Legal Aid Society, Neighborhood Defender Service, and New York County Defender Services put out a statement decrying these major new changes:

"It is unconscionable that Governor Cuomo, Andrea Stewart Cousins, and other state legislators would use a public health crisis as leverage to pass a bill that would increase jail populations across the State. To do so in secret, when the Capitol is closed to the public, during the budgeting process is even worse. If enacted, this proposal will drastically increase the number of people in jail who have not even had a trial yet. It would create a system in which innocent people are caught up in pre-trial detention and in which everyone's rights are trampled. It would ultimately set New York decades back."

"If anything, our current crisis underlines that our already overcrowded jail system is itself a public health threat. The rate of COVID-19 infection on Rikers Island is currently eight times that of the rest of the city. What happens within our jails impacts the rest of the state. Attempting to crowd yet more people into cells at this time not only shows a flagrant disregard for New Yorkers' rights, but a disregard for the wellbeing of the state at large.

As of Monday, Rikers has 180 prisoners infected with COVID-19. Across America, there are about 470,000 people being held in pretrial detention. They've been charged with crimes, but not yet convicted. An increase in pretrial detentions would, naturally, increase the risk of exposure of anybody who gets arrested, not to mention correctional officers themselves (137 staff members who work at Rikers are infected with COVID-19).

Representatives for the New York State Sheriffs' Association and the New York State Chiefs of Police are also unhappy that the reforms are being shoved in the budget. It's not that they're opposed, they just don't want changes shoved through in the middle of fighting a pandemic.

Read the proposed reforms for yourself here. This is a draft bill that might not make it into the final proposal, which as of Wednesday afternoon, had not yet been released.

The post has been corrected to explain that New Jersey has significantly curtailed, but not completely eliminated, cash bail.