Though focused on manufacturing and banking, this study sees economic optimism in quick and thorough interventions to keep people isolated. 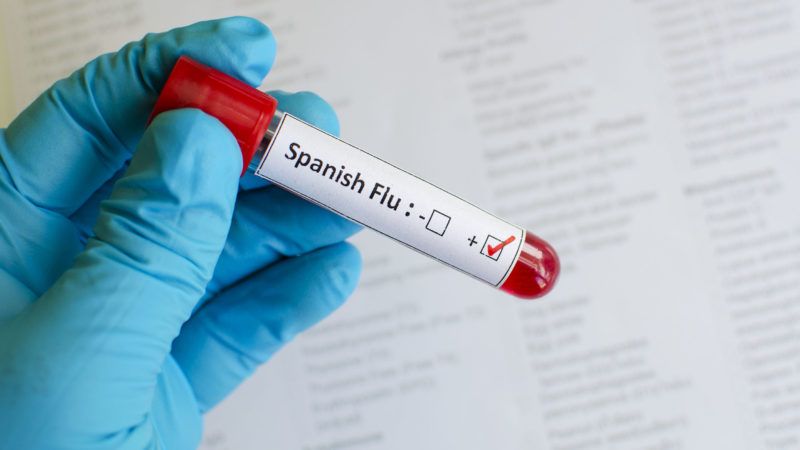 Pandemics have substantial economic costs, but the things governments choose to do (or stop doing) to ease the pandemic can do economic good even beyond lowering mortality, according to a new preliminary study posted on the Social Science Research Network, authored by Sergio Correia (of the Federal Reserve Board), Stephan Luck (of the Federal Reserve Bank of New York), and Emil Verner (of Massachusetts Institute of Technology).

While it is very hard to feel good about the short-term economic outlook now with so many businesses, people, and industries deprived of the ability to earn income for an indeterminate period, their findings do provide some historical grounds for something short of utter despair about restrictions done to slow the pandemic spread.

A series of pre-COVID-19 economic analyses on the economic effect and aftermath of the 1918 Spanish flu pandemic, reviewed previously at Reason, were short on granular discussion of how government or social reactions to the disease influenced economic outlooks or recovery. This new study, "Pandemics Depress the Economy, Public Health Interventions Do Not: Evidence from the 1918 Flu," out just last week, tries to do that.

The authors look at "non-pharmaceutical interventions" (NPIs) during last century's Spanish Flu pandemics and note "NPIs implemented in 1918 resemble many of the policies used to reduce the spread of COVID-19, including school, theater, and church closures, public gathering and funeral bans, quarantine of suspected cases, and restricted business hours."

After considering these interventions, they find "areas that were more severely affected by the 1918 Flu Pandemic see a sharp and persistent decline in real economic activity." But don't blame the NPIs, since "early and extensive NPIs have no adverse effect on local economic outcomes. On the contrary, cities that intervened earlier and more aggressively experience a relative increase in real economic activity after the pandemic."

Checking data on 43 distinct cities with differing reactions to the pandemic, they found that "cities that implemented NPIs for longer tend to be clustered in the upper-left region (low mortality, high growth), while cities with shorter NPIs are clustered in the lower-right region (high mortality, low growth)." The authors find "that NPIs play a role in attenuating mortality, but without reducing economic activity. If anything, cities with longer NPIs grow faster in the medium term."

Among the typical economic problems the pandemic seemed to cause, the authors found "more severely affected areas experience a relative decline in manufacturing employment, manufacturing output, bank assets, and consumer durables" and that the 1918 pandemic "led to an 18% reduction in state manufacturing output for a state at the mean level of exposure. Exposed areas also see a rise in bank charge-offs, reflecting an increase in business and household defaults."

The analysis of NPIs, though, is of perhaps more instant interest as we watch economic activity frozen by pandemic-related interventions. As the authors note, "All else equal, NPIs constrain social interactions and thus economic activity that relies on such interactions" so a first guess might be they'd impose long-term economic damage.

Despite that initial intuition, on digging they found:

NPIs were common in 1918, being adopted in all major cities though not all with the same speed and severity. The authors were able to gather information on the speed and length of "school closure, public gathering bans, and isolation and quarantine" for 43 cities, via "municipal health department bulletins, local newspapers, and reports on the pandemic." In 1918, "local responses were not driven by a federal response, as no coordinated pandemic plans existed."

To be sure, our modern economy is of a very different sort than that of 1918—one can't help but wonder at the fate of so many in our service, entertainment, and restaurant economy of today when looking at their analysis which focused on manufacturing and banking. They don't discuss total unemployment, for example, and interventions today leading to possible 32 percent unemployment seem possibly more worrisome than what happened in the aftermath of 1918, when the highest estimates of the unemployment rate hovered around 11.7 (though that height wasn't reached until 1921).

We cannot pinpoint the exact dynamics and mechanism through which NPIs mitigate the adverse economic consequences of the pandemic. However, the patterns we identify in the data suggest that timely and aggressive NPIs can limit the most disruptive economic effects of an influenza pandemic. The epidemiology literature finds that early public health interventions reduce peak mortality rates—flattening the curve—and cumulative mortality rates…Because the pandemic is highly disruptive for the local economy, these efforts can mitigate the abrupt disruptions to economic activity.

The researchers think they see some sign in the COVID-19 context that "Countries that implemented early NPIs such as Taiwan and Singapore have not only limited infection growth. They also appear to have mitigated the worst economic disruption caused by the pandemic. Well-calibrated early and forceful NPIs should therefore not be seen as having major economic costs in a pandemic."

America can only hope the history the authors think they found repeats itself.