The agency should relax the yearlong deferral period. 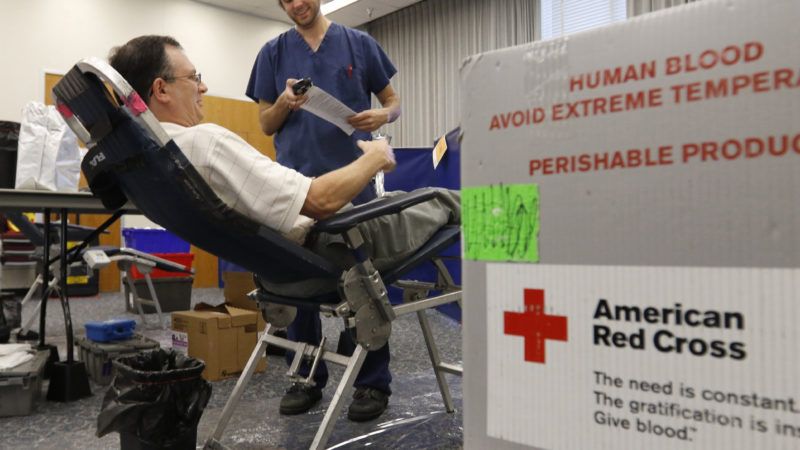 There's been a steady stream of roadblocks facing the U.S. as it seeks to curb the spread of COVID-19, but perhaps none quite as absurd as the hindrances posed by the Food and Drug Administration (FDA). Its stringent regulations are, in theory, meant to protect the public, but its rules sometimes get in the way when people most need help.

The American Red Cross recently declared an "urgent" shortage of blood donations with thousands of blood drives canceled due to the COVID-19 outbreak. Yet the FDA still prohibits men who have sex with men (MSM) from donating if they don't abstain from that behavior for at least a year—a regulation that makes little sense nowadays.

While the rule is antiquated, its implementation in December 2015 was actually seen as a step up; the FDA previously enforced a lifetime ban on blood donations from MSM. That caution certainly made sense in the early 1980s, when the AIDS crisis was scientifically confusing and testing had not yet advanced far enough to screen for HIV antibodies. But now it's 2020, and medical capabilities have advanced quite a bit: Every donation, whether it comes from a gay man or not, is tested for a full range of potential diseases, including syphilis, hepatitis, human T-lymphotropic virus, and, yes, HIV.

So why the ban?

People who have been newly infected with HIV may initially test negative for the virus. But current methods can find those antibodies within nine to 11 days after infection, making the yearlong deferral period confusing.

"At this time, FDA's recommendations regarding blood donor deferral for men who have sex with men have not changed, but we are actively considering the situation as the outbreak progresses," a spokesperson for the agency tells Reason.

Their website notes that, in 2010, the HHS Advisory Committee for Blood Safety and Availability decided the lifetime ban was "suboptimal." After years of studies, the group concluded that one year of MSM celibacy was appropriate to deter risk, though that figure might have less to do with data and much more to do with mirroring the same arbitrary yearlong deferral periods instituted by several countries abroad.

"The selection of a donation deferral time period of 12-months is not based in science but appears to be modeled after other countries' choices and fears," wrote the American Public Health Association in June 2015.

Indeed, the one-size-fits-all policy perpetuates a fundamental and unscientific misconception around gay men, their sex lives, and how HIV is spread. Though it's true that MSM are more likely to contract HIV than heterosexual males, the FDA's current process does not penalize straight males or females who engage in risky practices. A gay male who hasn't had any sexual contact in six months will be barred from donating blood, while a man who has had casual sex with multiple partners over the last year or month or week will sail through screening.

Taking that into account, the FDA should depart from its illogical risk assessment process in favor of one that actually assesses risk properly.

Consider the process in Italy, which, in 2001, enshrined a procedure that analyzes factors on an individual basis instead of establishing blanket bans based on orientation. A no-risk result receives no deferral, a risk result receives four months, and a high-risk result is turned away indefinitely.

A similar system in the U.S. would likewise open doors for other donor groups who are senselessly and unscientifically prohibited from donating, including anyone who has ever had sex for money or anyone who has ever injected drugs that were not prescribed to them. Both groups receive lifetime deferrals, regardless of testing capabilities that screen for hepatitis and HIV.

Citing increased demand for donors, several senators—including erstwhile Democratic presidential candidate Amy Klobuchar (D–Minn.) and current contender Sen. Bernie Sanders (I–Vt.)—are asking the FDA to contemplate changing their process. "In light of this shortage, we urge you to swiftly update blood donor deferral policies in favor of ones that are grounded in science, are based on individual risk factors, do not unfairly single out one group of individuals, and allow all healthy Americans to donate," they wrote.

Paramount to this discussion is the safety of the blood supply—endangering that is certainly not worth sparing any one group's hurt feelings. Calls to remove deferrals entirely for potentially risk-prone individuals make little sense. But current testing capabilities do support relaxing gay and bisexual men to a three-month deferral rate, which may even increase compliance among donors who would otherwise lie in the face of ridiculous waiting periods. Those who remain skeptical of this proposal can look to the U.K., which instituted a three-month deferral for MSM and saw no increase in HIV-infected blood.

"FDA is aware there has been a significant reduction in blood and plasma donations around the country," a spokesperson said. "The agency is working with the blood banking and source plasma industries to encourage healthy people who wish to help to donate blood. People who donate blood are like those people working in a critical infrastructure industry."

That's true. But many gay men are perfectly healthy. I'd venture to say that large numbers would be interested in helping reduce these shortages during this crisis, should they be subject to an evaluation process driven by science, not stereotype.