Patrick Jones, 49, was serving a 27-year sentence for a nonviolent drug crime. 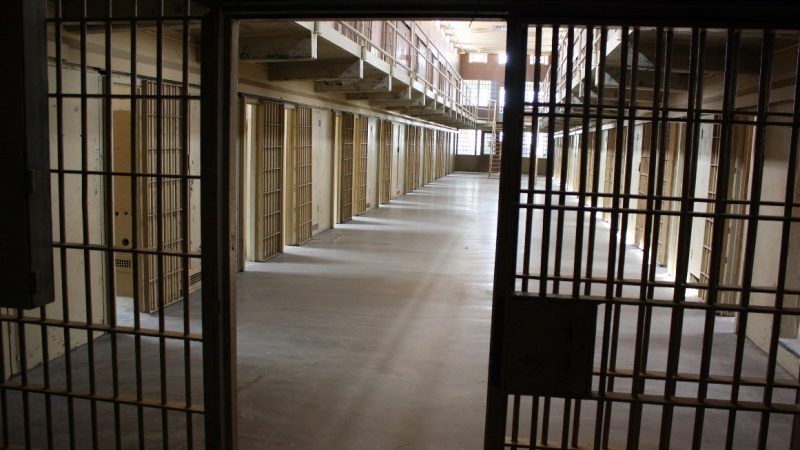 The Bureau of Prisons (BOP) confirmed late Saturday night that a federal inmate has died from COVID-19—the first known death of an inmate in the federal prison system.

Reuters reports that Patrick Jones, 49, an inmate at a low-security federal prison in Oakdale, Louisiana, died from complications after contracting COVID-19. According to the latest numbers from the BOP, 14 inmates and 13 staff members are infected with the virus.

Civil liberties groups, criminal justice advocates, and families of inmates have been begging the Justice Department to get elderly and at-risk inmates out of federal prisons, saying the effects of outbreaks inside prison walls could be catastrophic. There are roughly 20,000 inmates over the age of 55 in the federal prison system.

On Thursday, Attorney General William Barr announced that he was directing the Bureau of Prisons to expand home confinement for at-risk inmates, but civil liberties groups say the Justice Department guidelines will exclude wide swaths of inmates.

"A prison sentence should not become a death sentence," Udi Ofer, director of the American Civil Liberties Union justice division, said in a press release today. "The conditions and reality of incarceration make prisons and jails tinderboxes for the spread of disease. Our leaders must immediately take steps to release those identified by the CDC as most vulnerable to COVID-19. With every hour of inaction that passes, the greater the human tragedy."

Jones' death is a grim portent, but how he ended up in prison also tells a story about the innumerable failures of the drug war and the criminal justice system.

Jones was sentenced in 2007 to 27 years in federal prison for possession of crack cocaine with intent to distribute within 1,000 feet of a junior college.

According to an October letter from Alison Looman, a lawyer who assisted Jones in preparing a 2016 clemency petition, Jones "essentially raised himself on the streets, without family support."

"A product of incest, his grandmother died when he was 6 and he shuffled between relatives and the street for the rest of his childhood (in one painful chapter, his mom kicked him out when he was 11)," Looman wrote.

In 2007, Jones and his wife were both charged by federal prosecutors with possession of crack cocaine with intent to distribute after a police officer found several bags of the drug in their apartment in Temple, Texas.

Jones' wife pleaded guilty. Jones, on the other hand, took his case to trial and lost. He was sentenced to 360 months in federal prison under a drug-free school zone enhancement. (These zones often apply in private residences, whether or not school is in session or minors are involved.)

As Reason has reported, drug-free school zone charges are rarely used in actual cases of dealing drugs to minors. Rather, they're used by prosecutors as leverage to squeeze guilty pleas out of defendants, and as punishment when a defendant turns down a deal and invokes his or her constitutional right to a jury trial.

Jones' wife, who testified against him, received a significant downward departure from federal sentencing guidelines and was sentenced to three years in prison. Although police only found 21 grams of cocaine in their apartment, Jones was ultimately sentenced for 425 grams of sales based on her testimony.

Defense attorneys and civil liberties groups call this phenomenon "the trial penalty" and attribute the extraordinary decline in criminal trials to it. In federal courts, more than 95 percent of all criminal cases end in plea deals.

There is no parole in the federal prison system, and, buried under a nearly 30-year-sentence, Jones didn't have many legal escape hatches left. He applied for clemency under Barack Obama's large-scale clemency initiative, which was intended to grant relief to federal inmates serving long sentences for nonviolent drug crimes, but he was one of thousands of inmates whose petitions were denied.

Another glimmer of hope appeared in late 2018, when Congress passed the FIRST STEP Act, a criminal justice reform bill that made reductions to crack cocaine sentences retroactive.

Jones was eligible and applied for a sentence reduction. "His primary goal in requesting a sentencing reduction is to try and be there for his son, who he has not seen or been able to provide support for since his son was three years old," his petition said.

However, federal prosecutors opposed Jones' petition, and a judge denied it in December, citing Jones' criminal history—a non-violent burglary spree when he was 17 years old and a single arrest for three drug sales to an undercover police officer.

There were many points along the way in Jones' case where a small deviation in the way the criminal justice system normally operates could have possibly led to a different outcome, but that didn't happen.

On March 11, Jones filed an appeal of the denial of his petition for a sentence reduction. Eight days later, he was transported to a local hospital with a persistent cough. Nine days after that, he was dead.