The Feds Are Suspending Some Tariff Payments. They Should Suspend All of Them.

It's almost like Americans are paying for them, and like Trump doesn't actually believe in free trade. 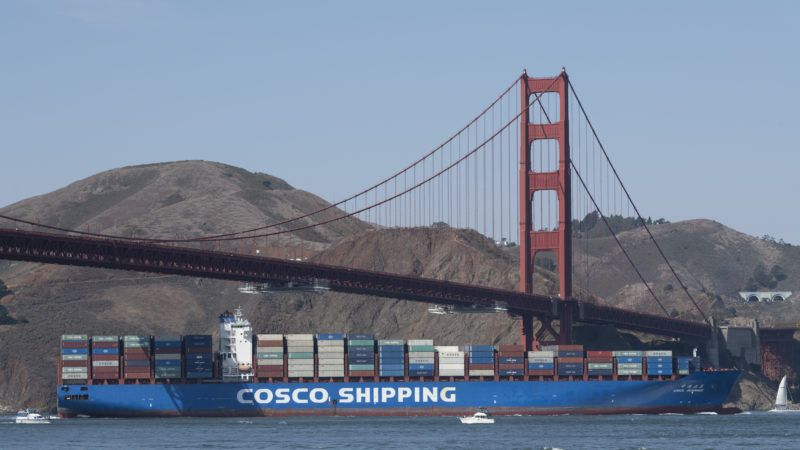 The federal government will grant some temporary relief to importers by suspending and delaying some tariff payments, even as President Donald Trump reportedly resists calls for a full repeal of his tariffs.

The Wall Street Journal reports Wednesday that U.S. Customs and Border Protection (CBP) is notifying companies that "payment of estimated duties, taxes, and fees" will be suspended "on a case-by-case basis" due to the COVID-19 outbreak. Those delays come shortly after the Internal Revenue Service (IRS) postponed the deadline for filing corporate and personal income taxes from April 15 to July 15. As with the postponement of Tax Day, the tariff relief seems designed to remove a burden from American businesses and consumers in advance of what is expected to be a severe recession.

While CPB's decision to delay tariff payment is a welcome step in the right direction, it falls far short of what some business groups are asking the Trump administration to do. In a letter to the White House last week, more than 100 business and trade associations asked the president to immediately lift his tariffs on steel, aluminum, and goods made in China.

"These tariffs are taxes that Americans pay," Americans for Free Trade, the umbrella group that sent the letter, wrote. "We urge you to provide tariff relief as one of the measures to help those hurting financially from the economic effects resulting from the current public health crisis."

Research from The Trade Partnership, a pro-trade consulting firm, concludes that a full suspension of the tariffs imposed since Trump took office would boost the U.S. economy by $75 billion, or about 0.4 percent of GDP.

Trump, so far, does not seem swayed—and he continues to push the obvious lie that China is paying the cost of the tariffs.

"China is paying us billions and billions of dollars in tariffs and there's no reason to do that," Trump said last week when asked for a response to the letter, The Wall Street Journal reported. "I can't imagine Americans asking for that."

Throughout the two years of Trump's trade war, a popular defense of the president's approach to trade has been for his supporters to argue, against all available evidence, that Trump is actually trying to lower trade barriers. Mostly, this defense hinges on a single comment that Trump made at the G7 summit in July 2018. "No tariffs. No barriers. That's the way it should be," Trump said.

It's hard to argue with that.

But nothing Trump has done since then suggests that robust free trade is his ultimate goal. Indeed, his resistance to suspending tariffs or dropping his counterproductive trade war even in the face of a pandemic and looming recession should prove as much.

A little relief on a case-by-case basis is fine for the businesses that get that special treatment. If some tariff relief is good for the economy, more tariff relief would be better.