"They were not sentenced to death, and they should be released immediately." 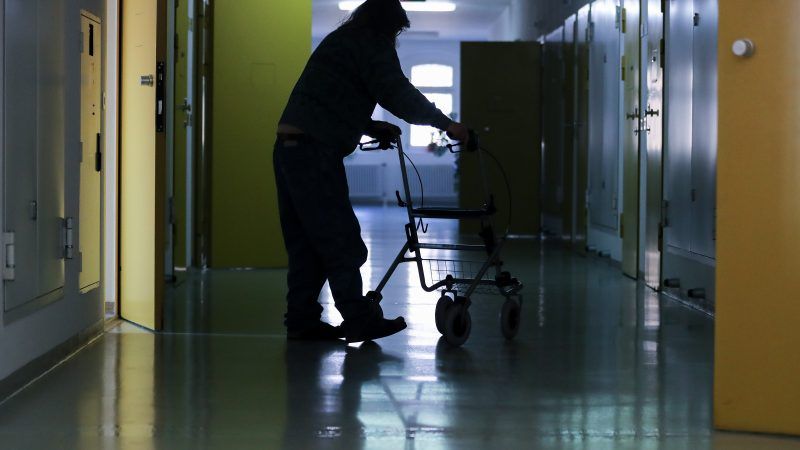 Thousands of elderly federal inmates are incarcerated in prisons that could become hothouses for COVID-19, and advocates and members of Congress say the Trump administration needs to take rapid action to get them out of harm's way.

On Tuesday criminal justice groups and lawmakers on both sides of the aisle—not to mention inmates themselves—urged the Trump administration to use existing compassionate release policies, as well as mass clemency or executive orders, to free at-risk federal inmates.

"There are thousands of sick and elderly people in federal prison whose continued incarceration serves no public safety purpose," Kevin Ring, president of the criminal justice advocacy group FAMM, said in a press release. "This same population is the most vulnerable to coronavirus. They were not sentenced to death, and they should be released immediately."

Compassionate release is a federal policy that allows elderly and terminally ill inmates to go home ahead of schedule, affording them the small mercy of ending their lives among family and in relative peace.

The FIRST STEP Act, a criminal justice bill passed in 2018, expanded the program to allow inmates to petition judges for relief if they are denied or ignored by the BOP. Between 2014 and 2018, at least 81 federal inmates died while waiting for the government to review their applications for compassionate release. It also expanded the Elderly Home Detention Pilot Program, which allows elderly inmates to serve out the last third of their sentence in home confinement.

Several conservative groups—including FreedomWorks, Americans for Prosperity, and the Justice Action Network—urged President Trump in a letter today to announce an executive order "making clear that elderly, non-violent prisoners who have served 2/3 of their time should be transferred to home confinement as soon as possible."

"Given the risk of Coronavirus sweeping through prisons like a fire in a dry barn, impacting corrections officers and their surrounding communities, it's time to take the First Step Act one small step further," the groups said.

Many of those same groups joined the American Civil Liberties Union, the Leadership Conference on Civil and Human Rights, the Sentencing Project, and other criminal justice organizations in a letter advising Trump to commute the sentences of federal inmates who are terminally or chronically ill, or have underlying medical conditions that put them at greater risk of serious complications from COVID-19.

"As the United States continues to combat the global health pandemic rapidly spreading throughout the country, it is critical that we not forget the millions of people working and detained in jails, prisons and detention centers," the letter says.

A bipartisan group of 14 senators, led by Dick Durbin (D–Ill.) and Chuck Grassley (R–Iowa), is calling for similar steps. In a letter yesterday to Attorney General William Barr and BOP Director Michael Carvajal, the senators urged the agencies to to release or transfer at-risk inmates under compassionate release or the Elderly Home Detention Pilot Program.

"Conditions of confinement do not afford individuals the opportunity to take proactive steps to protect themselves, and prisons often create the ideal environment for the transmission of contagious disease," the senators wrote.

While Trump has granted clemency in several high-profile cases and decried the unfairness of long drug sentences, his administration has resisted mass commutations like the Obama administration's clemency initiative.

In the meantime, FAMM is urging at-risk inmates to petition their wardens for compassionate release immediately.

"That starts the clock," Ring said. "If Congress and the president don't act before then, the courts will have the chance to do the right thing."

Inmates, too, are putting their hope for relief in the Trump White House.

"We inmates want Trump and William Barr to release non-violent, minor crimes, and elderly inmates, just like the state and counties are doing," Lisa Marie Casey, a 45-year-old, wheelchair-bound inmate serving a 24-month sentence at FCI Aliceville, a federal women's prison in Alabama, wrote in an email to Reason today. "Warden [Patricia] Bradley is not taking anyone's compassionate release requests, as I have sent in three with medical documentation […] and still nothing. I am not the only one."

The Justice Department, the White House, and FCI Aliceville did not immediately respond to requests for comment for this story.