Coronavirus. We Got This.

Despite the slow-growing anxieties and government incompetence, expect Americans to be resilient in fighting the pandemic. 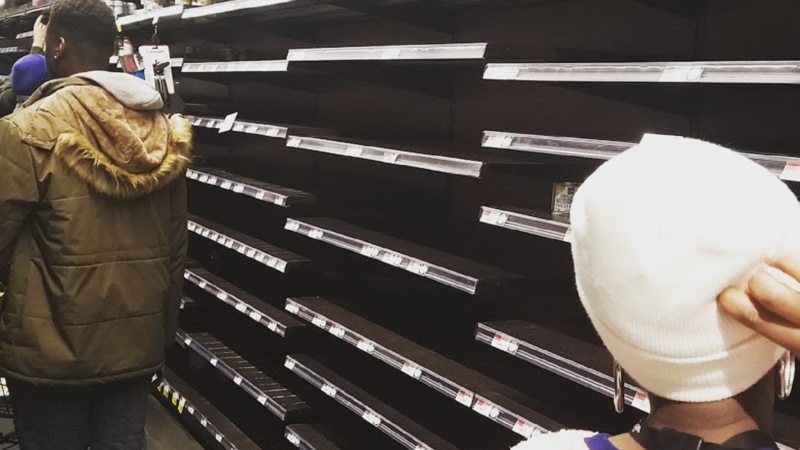 Last night, around 6:00 P.M. at the Whole Foods Market on the corner of Bowery and Houston streets in New York City, people frantically picked the store clean of just about everything, especially frozen and canned goods. This store is always crowded—I've been told it's the busiest Whole Foods in the country—but the checkout lines were the longest I've ever seen them. The bare shelves there looked disturbingly like ones in Venezuela circa 2017. Similar scenes played out all across the biggest, most-populated city in the country, where folks were desperate to stock up on food, toilet paper, and other staples as the coronavirus spreads. Especially in Manhattan, desperation is creeping into everyday life.

Just a couple hours before, Mayor Bill De Blasio had declared a state of emergency without really explaining what that meant, other than extra vigilance in officially reporting coronavirus cases, plus letting 10 percent of the municipal workforce telecommute. He promised that a full quarantine of the city was "unrealistic" and not in the cards, but also stressed that the situation was changing on an hourly basis. So who knows what diktats might come over the weekend from one of the least-liked and most-knuckleheaded elected leaders on the planet? This is the guy whose first action upon taking office in 2014 was to try to ban horse-drawn carriages from Central Park and move all the horses up to a retirement farm upstate.

Earlier in the day, another widely distrusted politician, Gov. Andrew Cuomo, had banned gatherings of more than 500 people across the state. Broadway theaters, museums, and legendary venues such as Carnegie Hall announced they were locking their doors for the foreseeable future. Suddenly you could ask yourself: Is this Fun City or a grim reboot of Edgar Allan Poe's "The Masque of the Red Death?" Cuomo had also instituted the nation's first "containment area," a sort of soft quarantine, in New Rochelle, a cartoonishly inoffensive Big Apple suburb best known as the place where the fictional Petrie family lived in the old Dick Van Dyke Show.

"We will ultimately and expeditiously defeat this virus," declared President Donald Trump in a widely panned speech from the Oval Office on Wednesday night. Amidst official next-day corrections of the president's remarks, the markets tanked; Trump's optimism has done little to buoy spirits. The cancellation of annual college basketball tournaments and the rest of the NBA and NHL seasons, along with the delay of baseball's opening day and a number of high-profile movie releases, underscore that we're at the early stages of a pandemic that might kill anywhere from a few thousand Americans to 1.7 million of us. (That latter figure comes from a worst-case scenario exercise conducted by the Centers for Disease Control and Prevention.)

Only two things, one inarguable and one more speculative, seem clear at the current moment. The first is that the federal government's response has been generally incompetent and ineffective from the get-go. As Reason's Ronald Bailey has written,

Officials at the Food and Drug Administration (FDA) and the Centers for Disease Control and Prevention (CDC) stymied private and academic development of diagnostic tests that might have provided an early warning and a head start on controlling the epidemic that is now spreading across the country.

Mass fingerpointing is underway in the political arena, with Republicans and Democrats now fighting over who exactly is to blame for all this and what to do next. Unsurprisingly, political leaders are pushing stimulus programs that are remarkably similar to the legislative agendas they had before anyone knew what the coronavirus was. After all, there's an election to win (or lose) in November.

Second, as governments at all levels try to redeploy our public-health apparatus more effectively, individual citizens will take more responsibility for their own roles in reducing the pandemic and securing not just their own health but that of their neighbors. If the CDC and other government actors screwed up by insisting on a tightly controlled, centralized, and sclerotic response to the coronavirus appearing in the United States, there's every reason to believe that regular Americans are doing everything they can and should do to minimize the spread of the disease, from being more careful about hygeine to voluntary "social distancing" and minimizing contact.

As important, shortages of hand sanitizer, toilet paper, and the like can be unnerving but are almost certain to be temporary and short-lived. Market economies are remarkably good at ramping up production, creating workarounds, and generating substitute goods and services in all sorts of ways.

The most surprising thing about the scene last night at Whole Foods in New York wasn't that it was so crowded. (Like I said, it's always crowded.) It's how chill people were, how polite and respectful. These are the first days of a health crisis that will unfold over weeks and maybe even months, so I'm cautious about loading too much significance into any early indicators. A month down the road, perhaps we'll be at each other's throats like warring factions in a zombie-apocalypse flick. More likely, we'll have minimized the spread of the disease thanks to changes in our behavior, increased the effectiveness of our institutional responses, and learned how to get along a little better than before.